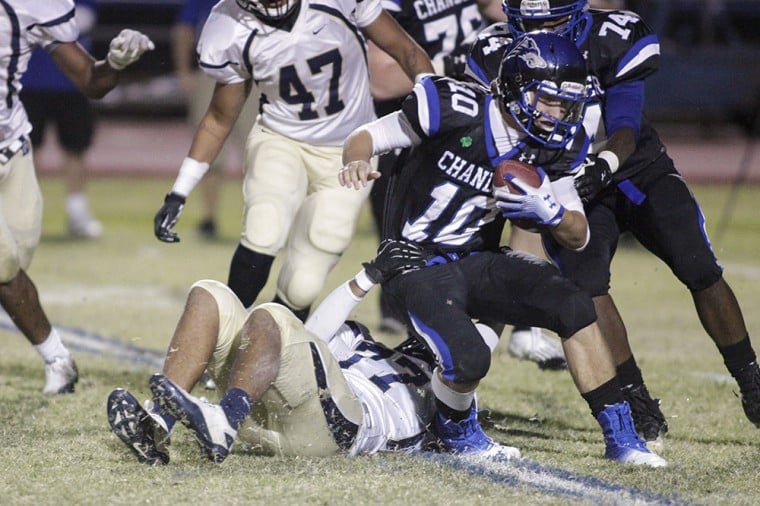 Quarterback Darell Garretson, #10 of Chandler, is tackled by Jalen Jelks, #77 of Desert Vista, during the football game between Chandler and Desert Vista at Chandler on Friday, Oct. 26, 2012. 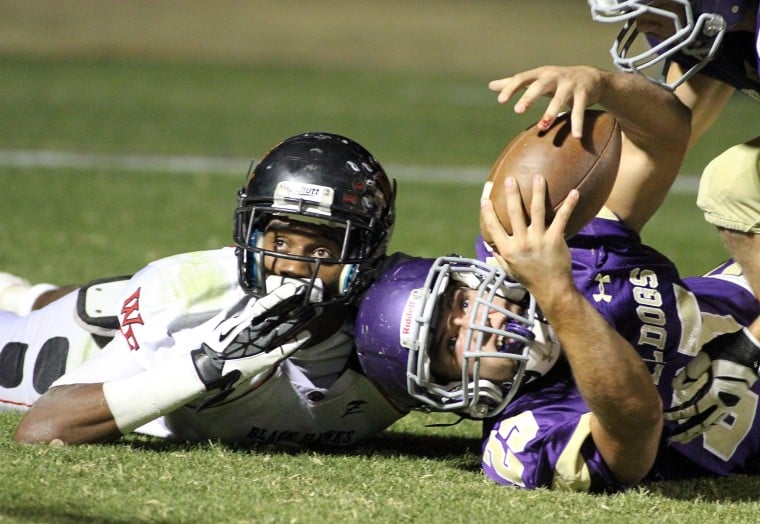 Quarterback Darell Garretson, #10 of Chandler, is tackled by Jalen Jelks, #77 of Desert Vista, during the football game between Chandler and Desert Vista at Chandler on Friday, Oct. 26, 2012.

The football playoff brackets were unveiled Saturday morning. Here is a crash course on what to expect from the top three divisions in the next four weeks as playoff-mania hits full tilt:

Best draw: Mountain Pointe — The Pride get an easy first-round matchup against Cibola and shouldn’t have much trouble against either Mountain View or Desert Mountain in the quarterfinals. Mountain Pointe should make the semifinals, and then it could have a chance to get payback after blowing a lead to Brophy in its only regular season loss.

Toughest road: Desert Vista — The defending champions will have definitely earned a repeat if they pull it off. The sixth-seeded Thunder face the best double-digit seed (Basha) in the first round, then would have to play Hamilton in the quarterfinals. If the Thunder finds a way to win that one, it would still need to likely beat Desert Ridge and then either Brophy or Mountain Pointe for the championship.

Best first-round matchup: No. 11 Basha at No. 6 Desert Vista — The Bears shocked the state by defeating Brophy in the quarterfinals last year, but now must try to upset an elite team right out of the gate. Basha almost knocked off Hamilton two weeks ago, so the potential is definitely there. There are several other intriguing first-round games, including a Desert Mountain-Mountain View rematch, Chandler versus Brophy and Westview against Pinnacle.

Best draw: Ironwood Ridge — Even though the Nighthawks lost in the regular season finale to Salpointe to drop from the top spot, they have a nice road against Prescott and then either Horizon or Apollo. A semifinal berth seems very likely.

Toughest road: Marcos de Niza — The Padres finished 9-1 but are staring at a quarterfinal matchup against Chaparral. The teams played earlier this season and Marcos de Niza scored on a last-second run by quarterback Josh Eckley to win, 29-27, but would probably be the underdog this time around. If Marcos de Niza can win, a rematch with Ironwood Ridge, which beat the Padres in the regular season, would await in the semifinals.

Best first-round matchup: No. 16 Notre Dame at No. 1 Salpointe — The Saints upset the Lancers a year ago in the first round as the No. 15 seed. Few thought they would make the playoffs this year after losing to Horizon in the regular season finale on Friday, but they snuck in as the final seed and get a chance to pull the upset again. Big difference this year: Lancers star Cameron Denson will play after missing last year’s game because of a suspension.

Best draw: Sabino — The undefeated Sabercats didn’t have much competition this season in Tucson and the road to the semifinals doesn’t seem particularly tough. They face Nogales in the first round and then either undefeated Sahuarita or Sunrise Mountain in the quarterfinals. Division III is spread out pretty evently so it won’t be a cakewalk for Sabino, but it’s a good bet to return to the semifinals.

Toughest road: No. 9 Saguaro — How about this for the two-time defending champions? A road game against perennial power Cactus, followed by another road game against No. 1 seed and undefeated Desert Edge. That’s just to get to the semifinals, where Liberty will likely await. Queen Creek or Sabino would likely be the state title opponent if Saguaro gets there.

Best first-round matchup: No. 12 Campo Verde at No. 5 Williams Field — The Black Hawks won the regular season matchup, 24-14, although they only led 10-7 heading into the fourth quarter. The Coyotes are playing well defensively while Williams Field must rebound from a 49-6 loss to Queen Creek in the season finale. This one could be close.

Bryce Kinsler, Cactus Shadows quarterback: It was a tough year for the Falcons, who finished 3-7, but the regular season finale will be one to remember. Not only did the team defeat Shadow Mountain, but Kinsler threw for 235 yards, breaking the state record for career passing yardage in the first half and finishing with 8.688 yards through the year in his three years on varsity.

Queen Creek: The Bulldogs capped an undefeated regular season with a 49-6 win over fellow unbeaten Williams Field. The defense forced three turnovers and Matt Guida continued his impressive season with 196 yards rushing and a touchdown. Queen Creek is the No. 2 seed in the Division III playoffs and has the look of a state title contender.

Chaparral: The Firebirds started 1-3 and were in danger of missing the postseason, but stormed back to win six straight to end the year, including a 38-20 pasting on Saguaro on Thursday. Chaparral is a No. 7 seed in the playoffs but has rounded into form and is once again a threat to win the state championship.

Missed extra points: Teams from across the East Valley had trouble with what should be the easiest part of a scoring play. Extra point attempts were an adventure, as blocked kicks and outright misses were a popular trend Friday night. There were some windy conditions at various games, but it still shouldn’t be that tough to make the extra point.

Chandler’s offense: The explosive Wolves were held in check by Desert Vista in a 23-6 loss. Desert Vista’s game plan was to sit back in deep coverage and force Chandler to run the ball and throw underneath routes, and it worked to perfection. The Thunder controlled the game throughout, forcing the Wolves on the road to face Brophy in the first round of the playoffs. With Brophy up next, the Wolves better find themselves.

Reach Kyle Odegard at (480) 898-6834 or kodegard@evtrib.com. Follow his blog at http://blogs.evtrib.com/varsityxtra, or find him on Twitter @Kyle_Odegard.