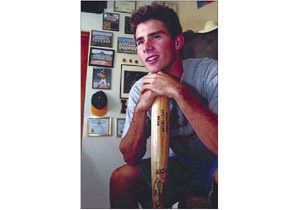 Brandon Wood relaxes Monday at home. Wood, a shortstop, is projected to go in the first or second round of today’s baseball draft.

Brandon Wood relaxes Monday at home. Wood, a shortstop, is projected to go in the first or second round of today’s baseball draft.

Brandon Wood recently lounged on his back patio, family dog at his side, relishing the rare moment of tranquility in the process that will determine his future — both as a baseball player and a young man.

The 18-year-old recent graduate of Horizon High School is expected to be taken in the first two rounds of Major League Baseball’s amateur draft, which begins today. In recent weeks, he has been through the gantlet of phone calls, meetings with scouts and workouts for teams.

Along with preparing for his future, Wood had to maintain a sharp focus on trying to lead the Huskies to a 5A state championship. That dream fell just short, as Horizon lost to Hamilton in the title game.

Oh, and there was the matter of passing that pre-calculus final.

"It’s been a whirlwind," Wood said. "People say your senior year flies by, and with baseball, it’s been even more hectic. . . . In high school, you think you have responsibilities. But I don’t, really. I have someone to cook my food and do my laundry.

"But once I hit the road, whether in college or the pros, I’ll have a lot of things to take care of, and not just in baseball. It will be a time for me to really find out who I am as a person."

Wood — a shortstop who batted .500 (58-for-116) with 20 home runs and 57 RBIs this season — has committed to the University of Texas but said he will sign if taken in the first two rounds. That’s likely to happen today.

However, Wood said he is making no assumptions.

"I’ve heard a lot of other people say the exact same stuff, that they would be taken high, and they got drafted late," Wood said.

Diamondbacks scouting director Mike Rizzo saw Wood work out at Bank One Ballpark on Friday. He said Arizona could take Wood with its second first-round pick (No. 29) if another player the DBacks are targeting has already been selected.

"He’s gotten better and better," Rizzo said. "He’s gotten to a point where he’s shortened his stroke up pretty good. . . .

"He had a hell of a workout here, and he’s shown some strength with the wood bat."

Wood’s emergence as a hot prospect has come out of the blue somewhat. A year ago, he said he was concentrating on having a solid senior season, then preparing to play at Texas.

"People talked like there was a chance I would get drafted, but nothing big," said Wood, who made the varsity team as a freshman primarily because of his defense.

The results of a weightlifting program that Wood began after his freshman year showed as a senior. He drove the ball consistently, which had been a missing facet of his game. His stock rose rapidly.

Horizon coach Eric Kibler calls Wood the top pro prospect to play for him at the school. That’s a profound evaluation, considering infielder Austin Manahan, the 13 th overall pick of the 1988 draft, played for the Huskies.

"He handled (the attention) well," Kibler said. "A lot of top high school players put the pressure on themselves (and) focus on their statistics. But he just kept gaining confidence. And he stayed a team player, and I think all of his teammates would tell you that."

And today, Wood is sitting not just on the precipice of a baseball career, but adulthood.

In three months, Wood could be in Austin, Texas, attending college. Or in two weeks, he could be in a small town, playing rookie-level ball — with a suddenly hefty bank account.

Through it all, Wood has kept a level head.

"I’m not nervous," Wood said. "I’m just anxious to find out, where will I be stationed? What are the plans? I don’t know, but I won’t be disappointed in whatever happens. Either way, I’ll be living out a dream."