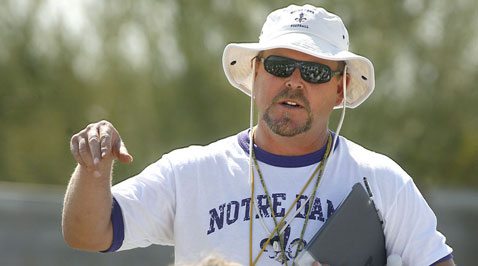 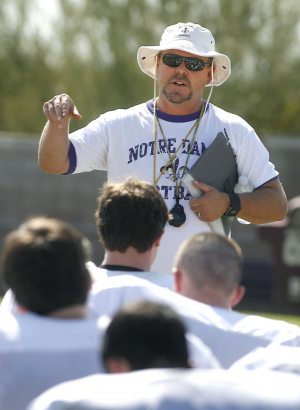 Notre Dame Prep’s football coach tells Page Too about getting roped into coaching and eventually building one of the most successful programs in the state.

Notre Dame Prep’s football coach tells Page Too about getting roped into coaching and eventually building one of the most successful programs in the state.

Page Too: Why did you decide to get into coaching?

Scot Bemis: I never wanted to be a teacher or a coach, and I kind of got roped into it. I got pulled into it right after college. A buddy of mine (current McClintock head coach Mike Gibbons) said they needed another coach over there. I did that for one year, and next thing you know they’re making me the defensive coordinator of the varsity. I’m like, OK, I like this and I kind of got the bug.

PT: Despite the hesitations, you knew coaching was for you after getting into it?

SB: Once I got into it, yeah. I love the game and I love the competitiveness. It’s just something where I want to go to work every day and do what I do. I love it.

PT: What kind of goals did you have when you started at Notre Dame?

SB: To be a very successful program. The two that I came from (McClintock and St. Mary’s) were nothing but great programs.

PT: After two straight titles and 26 straight wins, Notre Dame has done that. What was it like seeing it come to fruition?

SB: It makes me feel like the hard work and labor that you put in is worth it.

PT: You have put quite a few players into college football programs. What’s it like watching and hearing about them now?

SB: It’s great. When we’re breaking down film I’ve got my coaches on the Internet every day (tracking those players). They were going nuts watching (current Duke quarterback Sean) Renfree last week on the Internet.

Up close and personal

What kind of car do you drive: A Honda Civic. I try to save gas money.

Song you would sing on “American Idol”: Metallica, “Seek and Destroy.”

First job: Dishwasher at Bob’s Big Boy. It was horrible.

Favorite athlete in another sport: Michael Jordan, just because of everything he did.

Favorite city to visit: I love Chicago in the summertime, and San Diego’s Mission Beach doesn’t fall too far behind.

Food you refuse to eat: Raw oysters. They got me very sick one time.

Your hero: My dad

Bucket list: Travel abroad with my wife. Just to make her happy, though. I like the U.S.A.