Skip to main content
You are the owner of this article.
Edit Article Add New Article
You have permission to edit this article.
Edit
Home
The Mesa Tribune
Scottsdale Progress
The Chandler Arizonan
Gilbert Sun News
Queen Creek Tribune
Sports
More
1 of 2 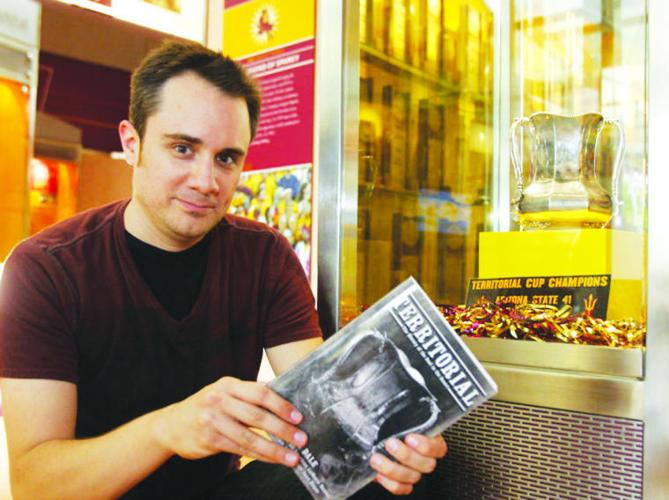 Author Shane Dale has written “Territorial,” a book dealing with Arizona State and University of Arizona’s football rivalry, the Territorial Cup. The book is available for purchase at Amazon.com. 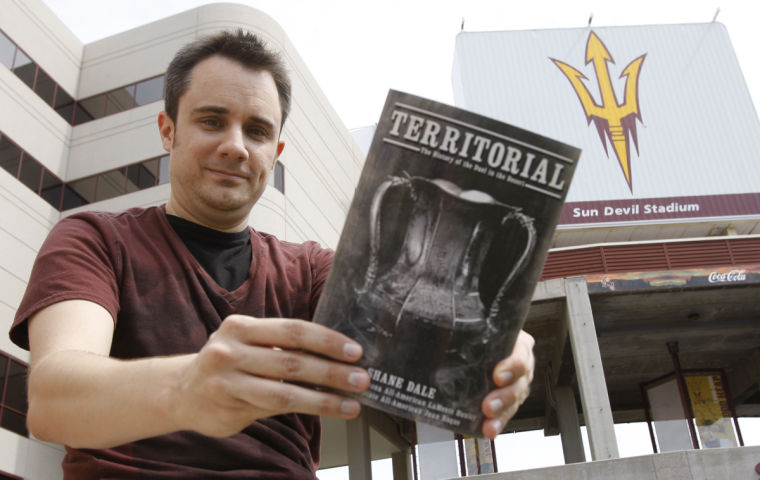 Author Shane Dale has written a book dealing with the Arizona State and University of Arizona's football rivalry and the Territorial Cup, shown, Thursday, July 11, 2013 in Tempe. [Tim Hacker/ Tribune]

Author Shane Dale has written “Territorial,” a book dealing with Arizona State and University of Arizona’s football rivalry, the Territorial Cup. The book is available for purchase at Amazon.com.

Author Shane Dale has written a book dealing with the Arizona State and University of Arizona's football rivalry and the Territorial Cup, shown, Thursday, July 11, 2013 in Tempe. [Tim Hacker/ Tribune]

Freelance writer Shane Dale lived in Chandler and Mesa growing up, went to college at the University of Arizona, married an Arizona State graduate and now lives in Queen Creek. An avid sports fan, he found it odd that a book had never been written about the football rivalry between the two universities.

Dale set out to change that, and, after more than 150 interviews with former players, coaches and analysts over a two-year span, he wrapped up “Territorial,” his self-published book about the history of the Sun Devils vs. Wildcats.

It was released on Tuesday and is available for purchase on Amazon.com. As of Friday, the book had jumped to the No. 3 spot on the sales charts for all Amazon books about football.

Dale spoke with the Tribune this week about the book and the history of the Territorial Cup. The Q&A has been edited for length and clarity. Read an excerpt of "Territorial: The History of the Duel in the Desert" here.

Q: What inspired you to write this book?

The fact that there hasn’t been a book about the rivalry is kind of a shame. I thought it was a good opportunity. I reached out to ASU and UA to see how feasible it would be. Both schools, especially ASU, were receptive to it. It’s been about a two-year process.

Q: How is the book formatted?

I broke it down chronologically into seven chapters. The shortest ones are from way back because there aren’t as many first-person accounts. No one’s alive from the 1899 game. The chapters get longer as the book goes along and I broke it down into eras. Then there’s a photo spread in the middle.

Q: Why did you decide to make it only about football?

Football is really the rivalry. Both schools can really say they have the edge, and that makes a great rivalry. Basketball really hasn’t been a rivalry, and in the other sports, there isn’t really enough interest. There is one game every year to decide it, compared to two in basketball and five or six in baseball.

Q: How many people did you interview?

About 150, a little more. A few analysts, both (athletic directors), about 140 players and coaches.

Q: Who are some of the most high-profile coaches and players interviewed for the book?

On ASU’s side, I talked to every living coach except for Dirk Koetter. Jake Plummer. Keith Poole. A lot of the guys from the ‘96 Rose Bowl team. Danny White. Whizzer White. Randall McDaniel. Al Harris. Andrew Walter. Juan Roque, who wrote a foreword for the book. Kyle Williams. Chris McGaha. On the Arizona side, the big one I wanted to get, which took me awhile, was Chuck Cecil. I talked to every living UA coach except John Mackovic. Nick Foles. Willie Tuitama. Ricky and LaMonte Hunley. LaMonte wrote the foreword for the UA part. Max Zendejas. Byron Evans. Clarence Farmer. I talked to him about the Sparky stomping incident. Art Luppino.

Q: Whose insight were you happiest to get?

Well, Plummer for sure from the ASU side. I wouldn’t have considered the book complete without him. I got to talk to him and he was a cool guy. And Chuck Cecil on the UA side because he was such an integral part of the rivalry. Those took a while to track down.

Q: Who was the hardest person to track down?

What’s funny is I wanted to talk to Mike Stoops and Dennis Erickson and unfortunately they were let go before I had a shot. Luckily I had a friend at (Arizona) Daily Star who helped me get Stoops, and ASU helped me get Erickson. They both were willing to talk for a half-hour when they didn’t have to.

Q: Were there some people who declined to be interviewed for it?

There wasn’t anybody that said no, but I’d call or email and not get responses. Obviously when you read through the book and you’ll know who is missing. A lot of the current NFL players I was not able to get a hold of. I’d go through the teams and I didn’t have a lot of luck with that. One of the guys I wasn’t able to get was John Jefferson. Nobody knows where he is anymore.

Q: Were most people happy to share their experiences with you?

Oh yeah. I didn’t have to twist many arms. Several guys would be relaying their stories with the rivalry, and they’d mention they were getting goose bumps just talking about it. Most guys were passionate about it and they were more than happy to share their memories.

Q: Is there a certain anecdote from the rivalry which sticks out to you after doing all this research?

The big one which really made this rivalry personal was when Arizona State College wanted to become Arizona State University and Arizona didn’t want it. It was a personal fight and there was a Prop 200 in 1958 which would change the name to Arizona State University. UA fought tooth and nail against it. Sun Devil Stadium opened that year, and right before the first-ever game, they assume it was UA people who burned into the grass, ‘No 200.’ That made it really personal. 200 passed easily, and later that year ASU went down to Tucson and cleaned UA’s clock, 47-0. I talked to the ASU players and they said one of the ways they could get back at them legally was on the football field.

Q: After talking to everyone, which game would you consider to be the best in the rivalry?

The best game ever was the 1975 game. Both teams were highly ranked, I think in the top-15, which hasn’t happened very often. It was the year of ‘The Catch.’ It went back and forth and ASU won, 24-21.

Q: Was it tough to sell the ASU contingent on this book since you are an Arizona graduate? Did anybody worry about it being slanted?

Surprisingly, it was not difficult. Both schools were helpful, but ASU has been incredibly helpful from the start. No one had a problem. Some of the ASU guys asked me where my loyalties lie, but I told them I intend for this to be a fair and balanced book. I haven’t had a single ASU player or coach say, ‘I can’t talk to you.’

Q: You mentioned that there hasn’t been a book written about the Duel in the Desert. Are you hoping this can become the definitive account of the rivalry between the programs?

Yes and no. As far as capturing the emotion and the most important events, I’d like the book to be perceived this way. One thing this book wasn’t, it’s not an encyclopedia of the rivalry. It’s not a box score of each game. There are anecdotal stories, behind-the-scenes stuff. As an example, before the ’93 game in Tempe, every UA player talked about when Chuck Cecil came back to talk to the team. He was with the Cardinals at the time. It was an emotional (speech) and they beat ASU that year.

Q: Do you look at the rivalry differently now that the book is finished?

I definitely know a lot more about it and appreciate it more. Especially talking to the guys that played in the 1940s and 1950s. I have a lot more appreciation for it.

Q: This is a pretty heated rivalry. Any worry about the reaction from either side?

First of all, what I’ve tried to do the past few months when creating publicity for it is to set the tone for being fair and balanced. I think I’ve done that pretty well. I’ll put a pro-ASU video up, and I’ll put a pro-UA video up the next day. As a journalist and as a fan, you’re able to take a step back and appreciate the rivalry and what it is on both sides. It takes two teams to make a great rivalry. For a lot of people it won’t matter, but the proof will be in the book.

Reach Kyle Odegard at (480) 898-6834 or kodegard@evtrib.com. Follow his blog at http://blogs.evtrib.com/varsityxtra, or find him on Twitter @Kyle_Odegard.