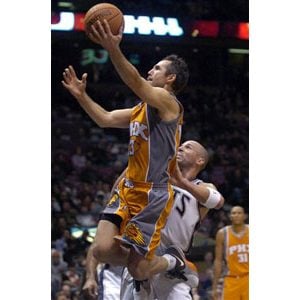 Phoenix Suns\' Steve Nash, top, of Canada, puts up a shot as he gets by New Jersey Nets\' Jason Kidd, rear, in the first overtime during NBA basketball Thursday night.

Phoenix Suns\' Steve Nash, top, of Canada, puts up a shot as he gets by New Jersey Nets\' Jason Kidd, rear, in the first overtime during NBA basketball Thursday night.

East Rutherford, N.J. - After they had combined for 80 points, 20 rebounds and 27 assists and dragged each other all over Continental Airlines Arena for 48 of the 58 grueling, exhilarating and downright indescribable minutes of basketball, there wasn’t much to separate friends Steve Nash and Jason Kidd Thursday night.

There was just a sliver of daylight to separate them – just enough for Nash to escape for a leaning, 25-foot 3-pointer with 2.1 seconds left in regulation that extended a wonderful evening of wide-open basketball even further — and just enough to allow the Suns to hang on for a 161-157 double-overtime win.

Nash finished with a regular season career high of 42 points — 27 of them after the fourth quarter and nine in the second overtime when he scored or assisted on 16 of Phoenix’s 18 points and literally dragged his team across the finish line.

“I would have been sick if we’d have lost, and that’s what it comes down to — not wanting to lose,” said Nash, whose previous regular season high was 39 (he had 48 against the Mavericks in Game 4 of the 2005 Western Conference Semifinals). “I don’t care how many points I had or what happened, the storyline … winning and losing is all I was thinking about.”

Kidd, who took Nash under his wing when the two were teammates for a season in Phoenix, was just as brilliant with 38 points, 14 rebounds and 14 assists, recording his 78th triple-double and tying Wilt Chamberlain for third on the all-time NBA list. The two matched shot for shot, pass for pass, directing their teams and lighting up the scoreboard to produce 318 points — tied for the fourth-highest total in NBA history.

But the Suns, 1-6 in overtime games since the beginning of the 2005-06 season, used a three-point play by Boris Diaw, two 3-point bombs by Nash and two inside baskets from Shawn Marion (33 points, nine rebounds) to finally end the two-hour, 48-minute marathon.

“I think we can go home tonight and just turn on 'Classic NBA’ and it will be on there already,” Phoenix coach Mike D’Antoni said. “It’s the best game I’ve ever seen. ... (but with the) talent they have with Vince Carter, you just couldn’t stop them.”

But Carter, who had 31 points on 13-for-17 shooting and added nine assists, stopped himself when he fouled out on an intentional foul to Diaw with 4.8 seconds left and the Nets leading by three points.

After Diaw and Kidd traded free throws, Nash had 4.4 seconds left to rub off a screen by Kurt Thomas, grab an inwbounds pass from Diaw and drill a 29-foot bomb to tie the score at 133 and send the game that featured 34 lead changes and 21 ties to overtime.

“We knew the Nets were going to have it ready to go. They needed a win and (New Jersey general manager) Rod Thorn was after them after a couple of tough losses,” said guard Raja Bell (24 points, 6-of-7 3-pointers) . “Steve was everywhere. If he didn’t have a look, he delivered it right where a shooter needed it. He made the play every time.”

Kidd not only had a huge individual game, he made history early in the fourth quarter by notching his 78th career triple-double — tying him with Chamberlain behind only Magic Johnson (138) and Oscar Robertson (181).

Nash, who played with Kidd in Phoenix, was happy to square off in that kind of game against his friend.

“I love him. He’s one of the best point guards ever to play the game and one of the best competitors,” Nash said. “It’s rewarding to play against someone who respects the game as much as he does because he plays the game the right way. It’s a pleasure to have him as a colleague.”

Not long after Kidd made history, Nash sought him out after a timeout. “I told him he’s only got 75 more than me,” said Nash, who notched his third triple-double last season. “I’m hot on his heels.”

Kidd said, “We were both having a good time. We just kept coming after one another.”

The last time Amaré Stoudemire appeared in New Jersey (last Mar. 27), he limped through only the second scoreless game of his career during a Nets rout and shut down his aching knees for the season – undergoing a second surgery eight days later.

Stoudemire said he didn’t even think about that Thursday, and his game didn’t leave many memories either. He hit his first six shots from the field and collected 23 points and 11 rebounds — stretching his career-long streak of double-doubles to seven — before fouling out in the first overtime.