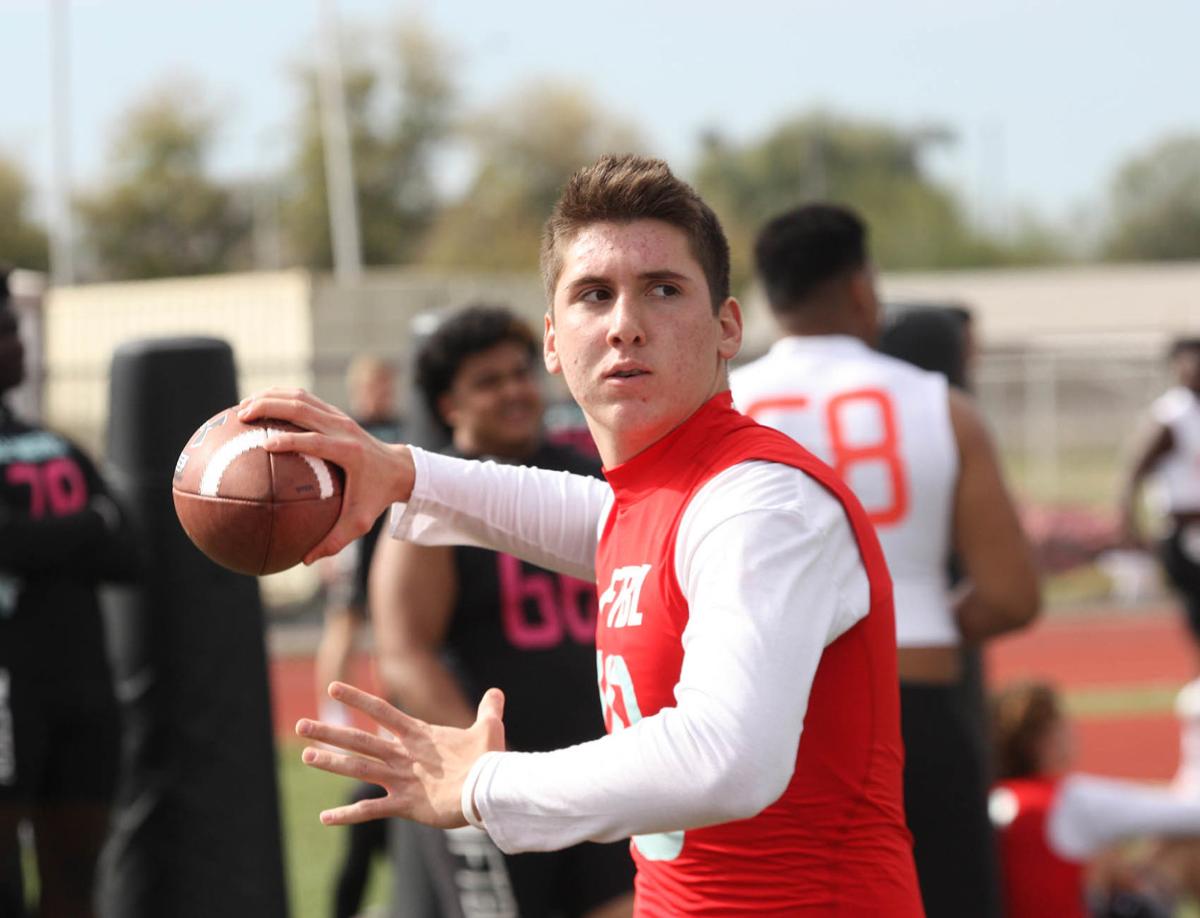 Desert Ridge junior quarterback Austin Kolb has taken extra precaution while training for his senior season in the fall. 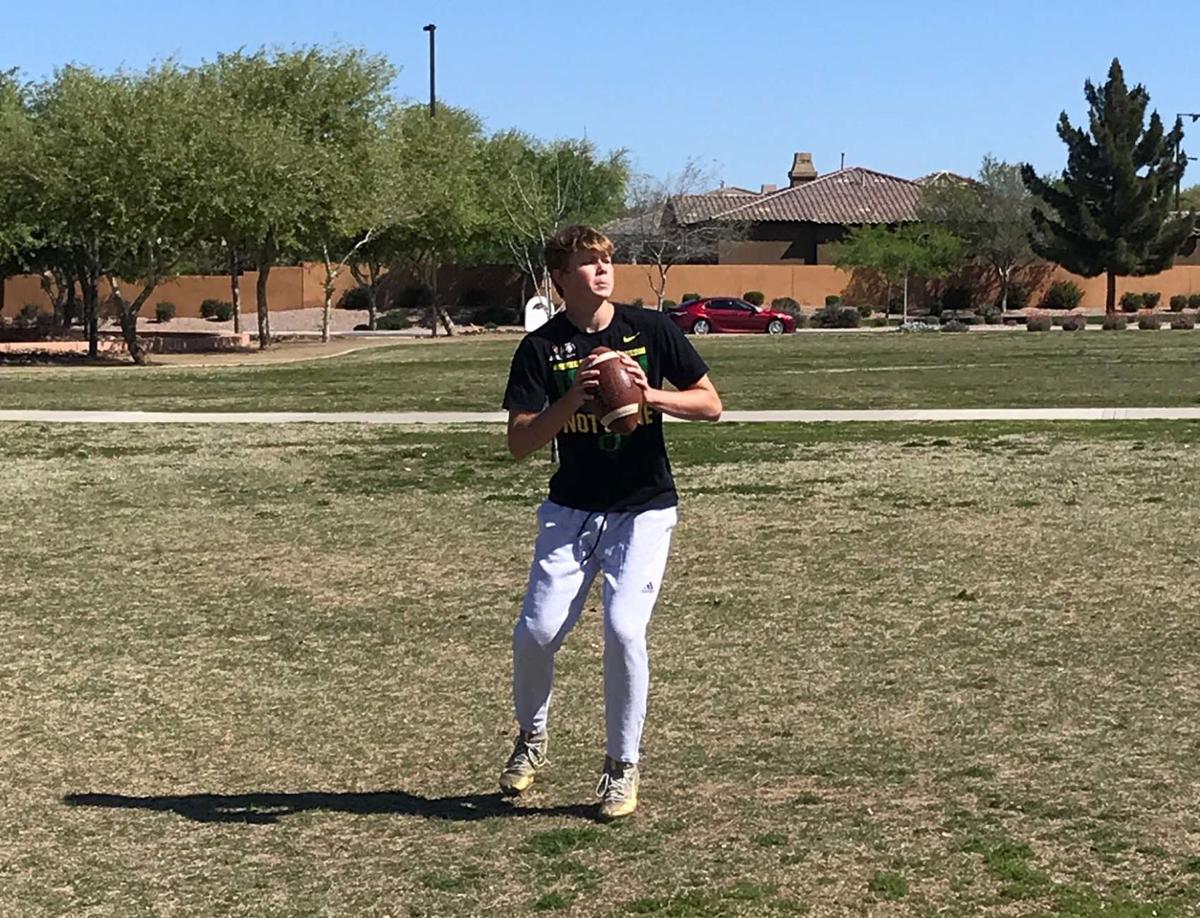 Landon Jury, a freshman quarterback at Casteel High School, has been working with Dan Manucci since he was in the sixth grade and has seen the training pay off. 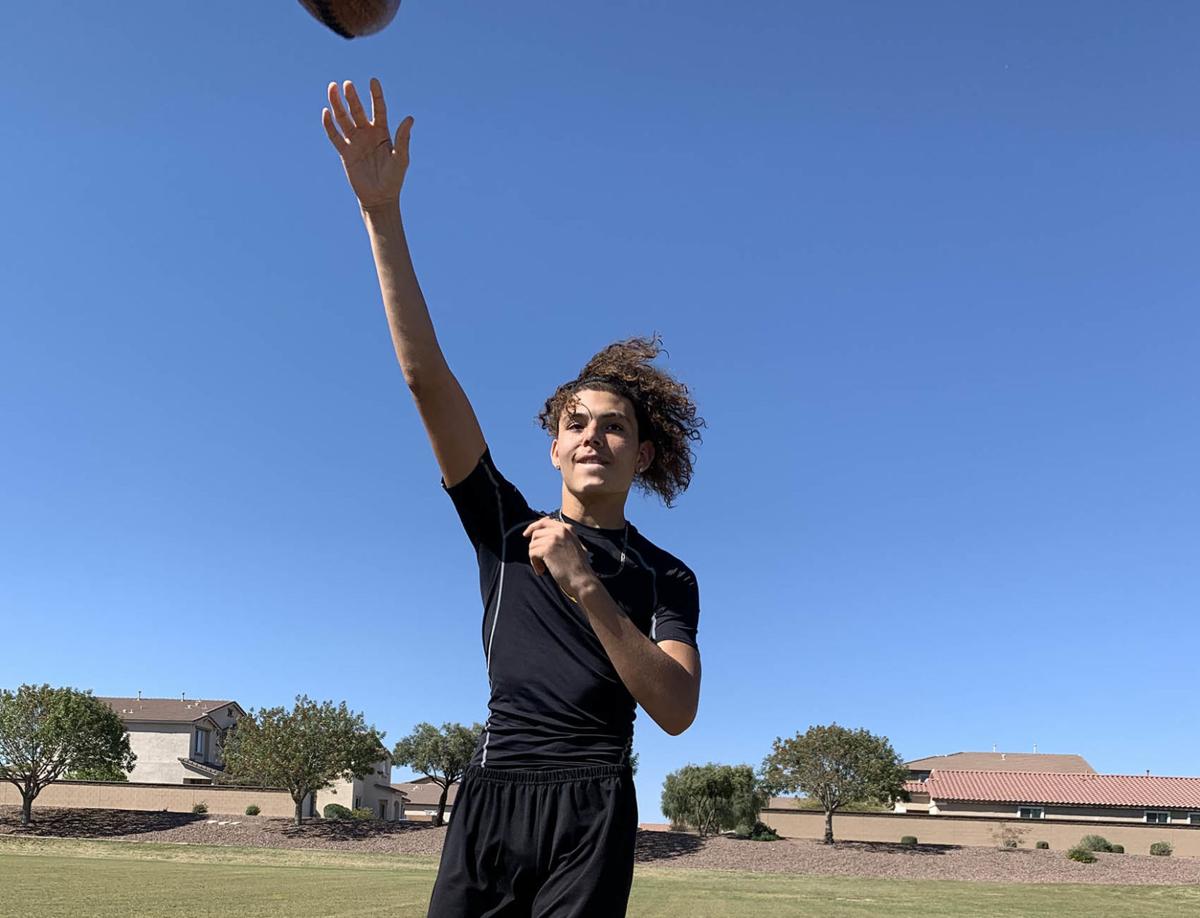 Mountain Pointe freshman quarterback Chris Arviso, who transferred from South Mountain, has seen his skills improve while attending Giovando’s training sessions but has taken extra precautions to stay safe while doing so. 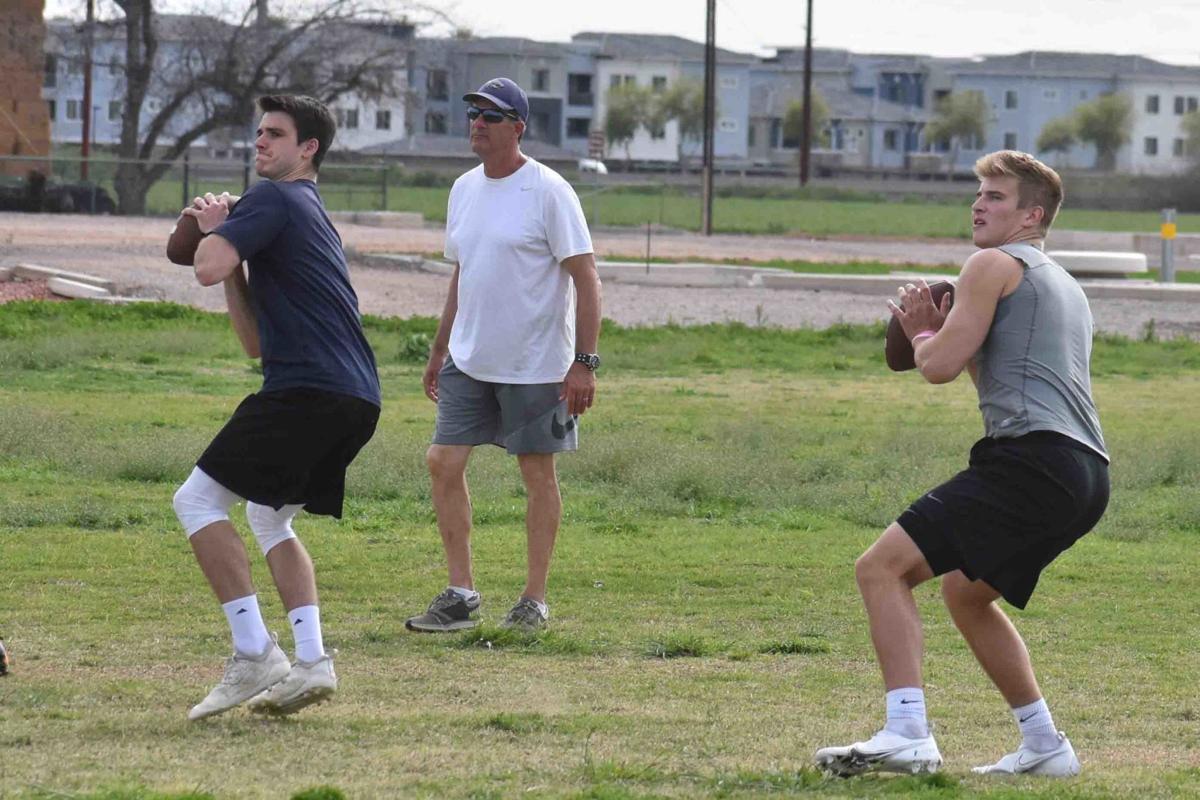 Dan Manucci (center) has trained several quarterbacks from Arizona high schools, including Notre Dame Prep’s Cameron Yowell (left), who is now at Auburn, and Hamilton’s Tyler Shough (right), who is now at Oregon. 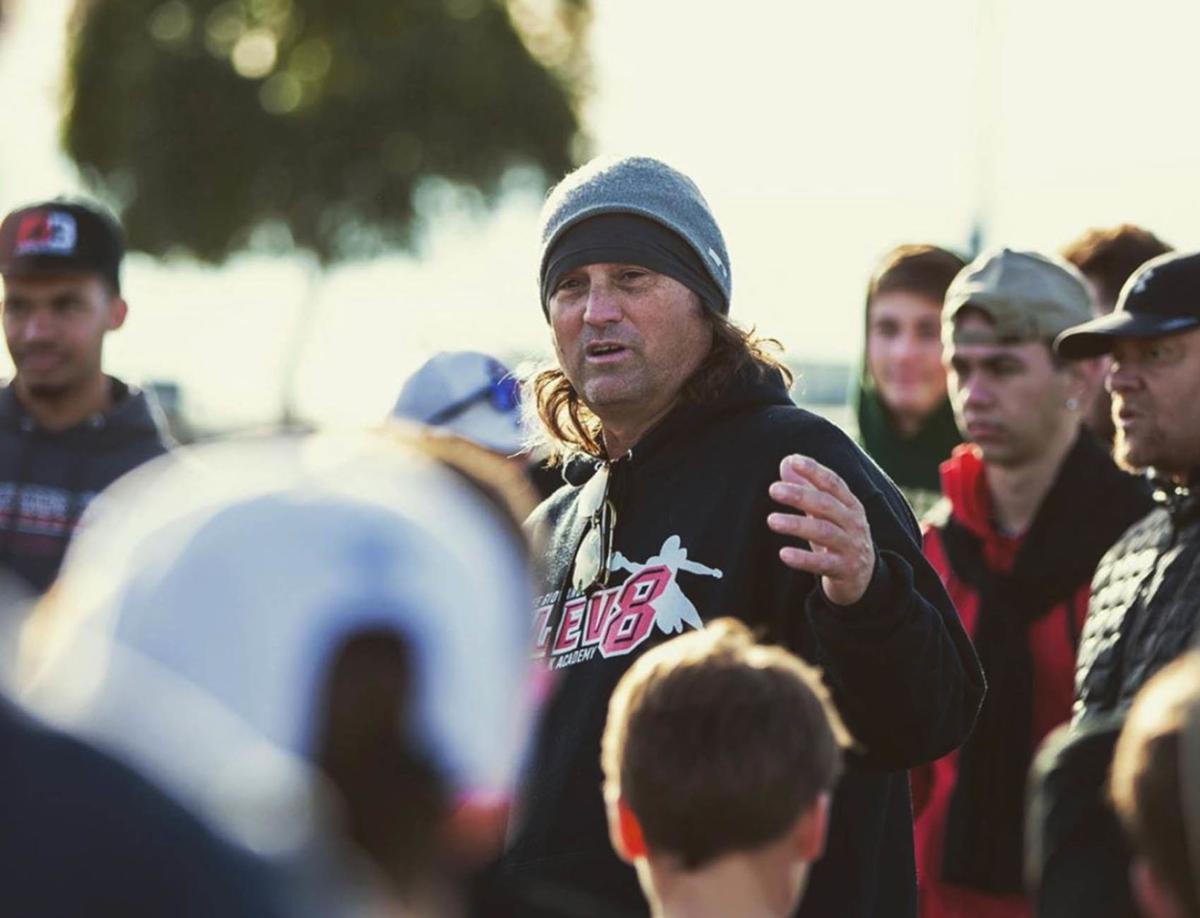 Mike Giovando, who runs Elev8 Quarterback Academy, said he has limited the number of players at each of his workouts to maintain a safe environment while helping them train.

Desert Ridge junior quarterback Austin Kolb has taken extra precaution while training for his senior season in the fall.

Landon Jury, a freshman quarterback at Casteel High School, has been working with Dan Manucci since he was in the sixth grade and has seen the training pay off.

Mountain Pointe freshman quarterback Chris Arviso, who transferred from South Mountain, has seen his skills improve while attending Giovando’s training sessions but has taken extra precautions to stay safe while doing so.

Dan Manucci (center) has trained several quarterbacks from Arizona high schools, including Notre Dame Prep’s Cameron Yowell (left), who is now at Auburn, and Hamilton’s Tyler Shough (right), who is now at Oregon.

Mike Giovando, who runs Elev8 Quarterback Academy, said he has limited the number of players at each of his workouts to maintain a safe environment while helping them train.

Arizona’s rise as one of the premier destinations for college coaches searching for next-level quarterbacks doesn’t come as a surprise to players or coaches.

It’s been one of the main goals for two of the state’s premier private trainers, Dan Manucci and Mike Giovando.

Now, both trainers and the players have made several adjustments to maintain a safe atmosphere for all involved.

“We all want to get a workout in, but be safe while doing it,” Desert Ridge junior quarterback Austin Kolb said. “We all keep a safe distance from each other, I wash my hands and just overall have good hygiene.

“This offseason I’ve been working harder, working out every day. I have to keep grinding for my team.”

Kolb enjoyed a breakout junior campaign throwing for 2,980 passing yards and 22 touchdowns to help lead Desert Ridge to the quarterfinal round of the playoffs.

He spent the entire offseason heading into his junior season working with Manucci, who has experienced his own success playing three seasons for the Buffalo Bills.

Manucci is now using his own experience to help players like Kolb seek a future at the next level.

“I tell them not to go through a workout but to grow through a workout,” Manucci said. “My passion is to teach them the right way, to respect the game and what it takes to get to that next level.”

Giovando has trained the likes of Spencer Brasch, a standout quarterback at Higley who is now at Cal-Berkeley. Others include former Gilbert and University of Arizona quarterback Will Plummer and his brother, Jack, who plays for Purdue.

Perhaps one of Giovando’s most notable players, however, is former Pinnacle star Spencer Rattler, an early candidate for the Heisman next season.

Some players are also impressive, with Hamilton sophomore Nicco Marchiol, a four-star rated prospect, Higley junior Kai Millner, who has picked up offers from Miami, NC State, Michigan State and others, as well as Red Mountain sophomore Jalen Daniels.

“A lot of these guys have been coming to me since the sixth grade, which has given us a lot of time to get the mechanics down,” Giovando said. “I really challenge them by making the throw a little uncomfortable for them or pressure them. We try to switch things up every day.”

Normally in large groups, both Manucci and Giovando have cut down the number of players allowed to attend each of their training sessions.

Other measures put in place include telling players not to high-five, fist bump or have any physical contact with one another, remaining 5 to 10 yards apart at all times during drills.

Landon Jury, a freshman quarterback at Casteel High School and cousin of Shough, has been working with Manucci since he was in the sixth grade.

He’s seen his skills on the field improve drastically, as he’s become quicker, more agile and overall more accurate inside and out of the pocket.

“We all keep a safe distance from each other, and we don’t do a lot of close interactive stuff,” Jury said, who has worked with Manucci since he was in the sixth grade.

Similar efforts have been made by Campo Verde sophomore quarterback Reilly Garcia.

Still just over a year removed from an injury that left him with a torn meniscus, a fracture at the growth plate on his femur and a torn hamstring, workouts with Manucci became a key part of Garcia’s rehabilitation.

Now that he has recovered, he plans to compete for the starting role for a team that made it to the 5A Conference championship.

“With these training sessions I’m getting much better with my mechanics and arm strength,” Garcia said. “I’ve improved being able to move in the pocket and have better pocket presence.”

Both coaches emphasize mechanics and footwork, putting each quarterback through simulation drills for what could happen in a game setting.

They admit it’s hard to replicate 11-on-11 football in pads while in a small group setting and t-shirt and shorts. But both have seen some of the drills pay off during game situations.

Facing a third down deep in Florida territory during the 2019 Orange Bowl, former Chandler standout Bryce Perkins escaped pressure in the pocket, leaping over a would-be tackler and stiff-arming another to throw back across his body and find his receiver in the back of the end zone.

It was one of the premier highlights of the New Year’s Six bowl game, and it was something Perkins and Manucci worked on during training.

“The hurdling was him just being a phenomenal athlete,” Manucci said. “But we would go right and make him throw back to his left accurately. Things like that just happen automatically in games, even if it seems repetitive in training.”

Christopher Arviso II, a freshman quarterback at Mountain Pointe, is another player on a long list that vouch for training sessions paying off in games.

Arviso transferred to Mountain Pointe from South Mountain in January. As a freshman for the 5A Jaguars, he threw for 1,255 yards and 27 touchdowns while only playing in three full games. When Mark and Marcus Carter, South Mountain’s co-head coaches last season, were hired to take over the Desert Edge program, he saw an opportunity under new Mountain Pointe coach Eric Lauer.

“I love Coach Lauer,” Arviso said. “My first practice with him and the team they all asked me where I came from and welcomed me. I just think Mountain Pointe is a good situation for me.”

Arviso will be in competition to start next season with sophomore Amier Boyd, who also transferred from South Mountain.

Training sessions with Giovando have helped prepare Arviso for the jump from 5A to 6A, and he’s maintained safety precautions while doing so.

“I wipe off my ball with Clorox wipes and use hand sanitizer on it and my hands,” Arviso said. “Coach Gio helps me on a lot of stuff with my form and mechanics. I also would go to his classroom schedule. He teaches me everything I need to know to move up to 6A.”

Less than 4 miles away at Desert Vista, another quarterback competition is heating up between three players who also receive coaching from Giovando.

“It’s cool working out with them,” Desert Vista junior Taron Thomas said. “I’m still a whole class ahead of them but we text all the time and especially for Jackson (Akins), I just try to explain what it’s like on varsity.”

Thomas played quarterback as a freshman for Desert Vista but transitioned to defensive back on varsity. Last season, he had 80 total tackles and three interceptions.

With the departure of Central Florida-bound quarterback Parker Navarro, Thomas has emerged as a potential starter under center and on defense along with freshman Jackson Akins and sophomore Landen Powell, who transferred from Mountain Pointe.

To help him tune up his throwing mechanics, he’s started going to Giovando’s workouts at times. But still does workouts on his own to stay safe.

“I go workout with coach Gio sometimes, but my dad and I also take what he taught me to a park on our own,” Thomas said. “At the same time, I do DB drills. It’s all about limiting the amount of people.”

Both trainers remain keen on emphasizing player safety as their main goal.

“We’ve got the wipes, we’ve got sanitizer, the kids all wash their hands and spray down the balls,” Giovando said. “We all have the same goal in mind to keep everybody safe.”