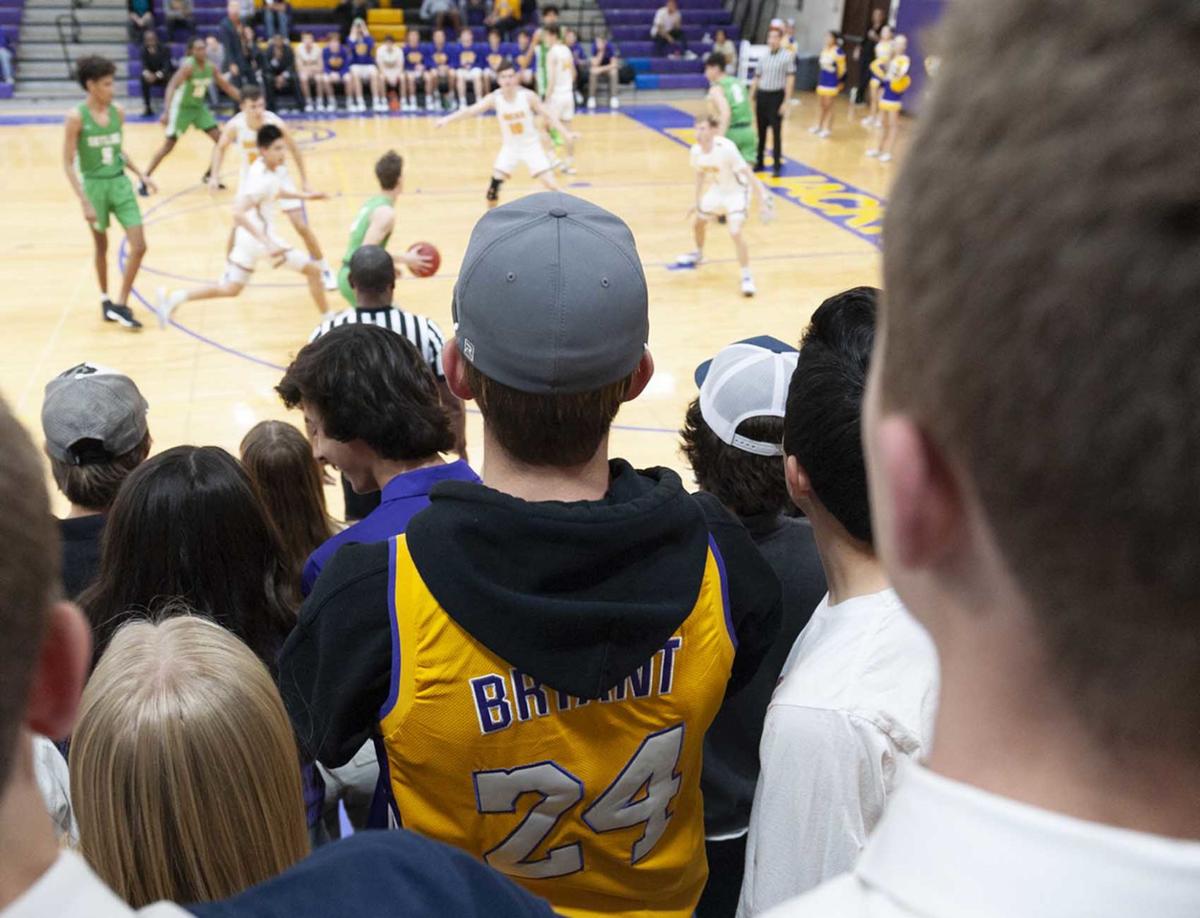 A Mesa High student wearing a Kobe Bryant jersey looks on during the Jackrabbits’ game against Skyline on a night the late Lakers star was honored. 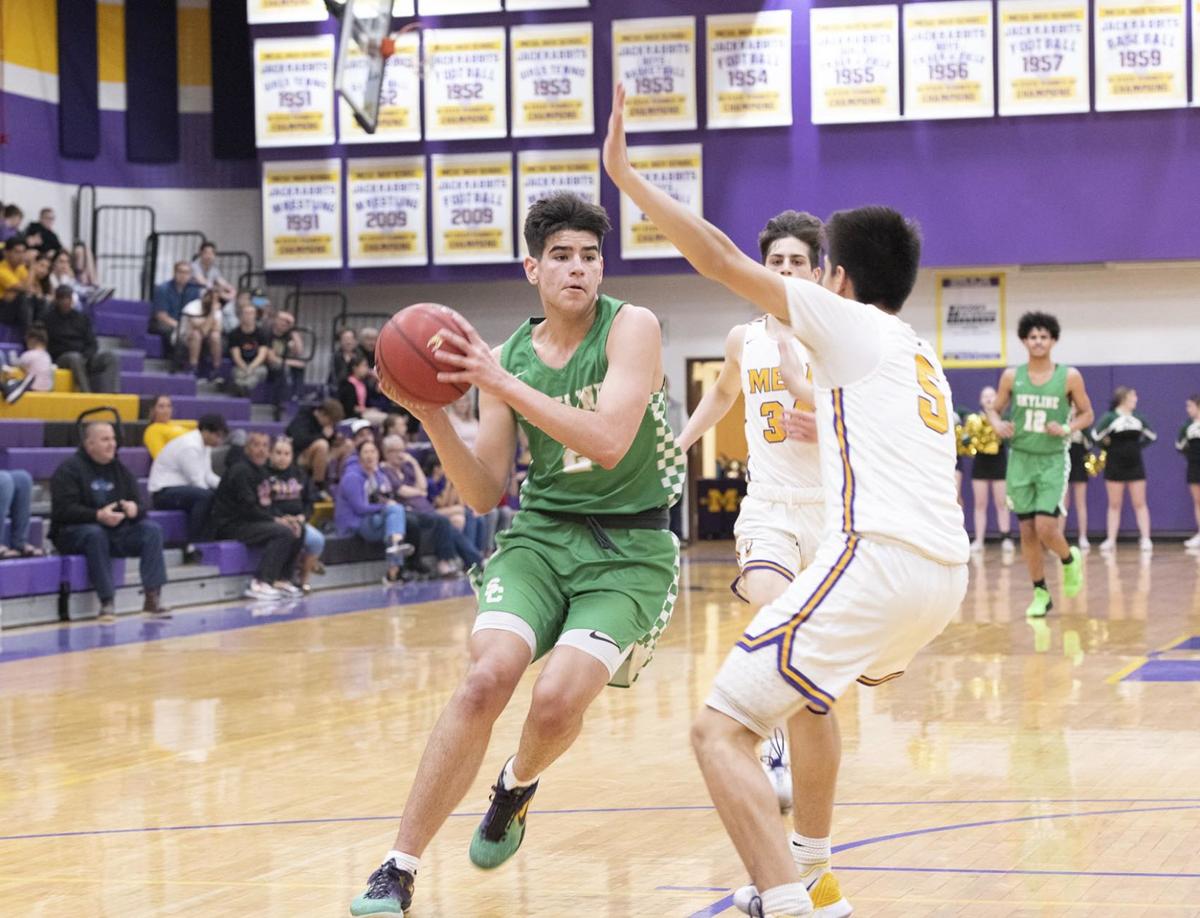 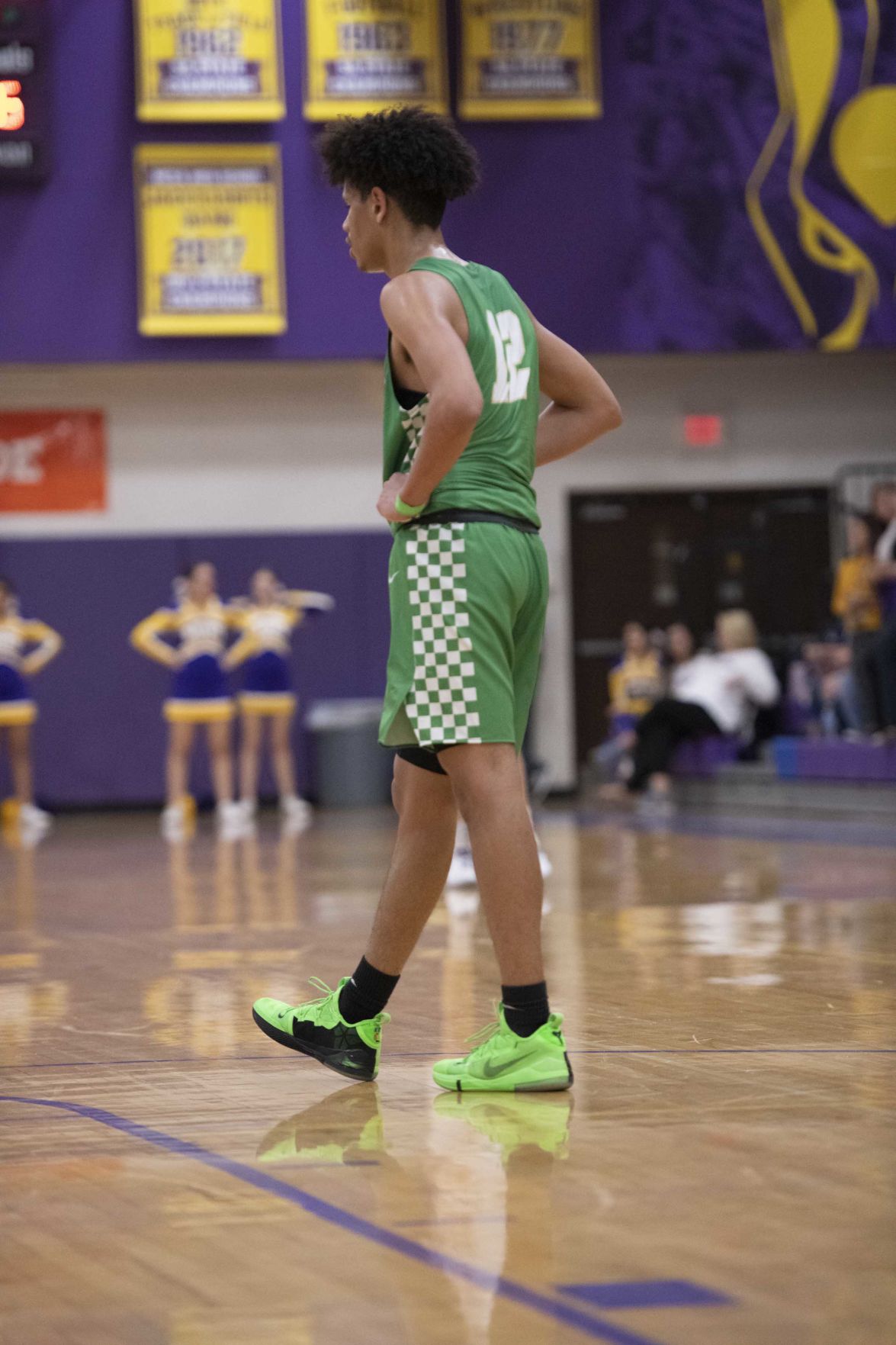 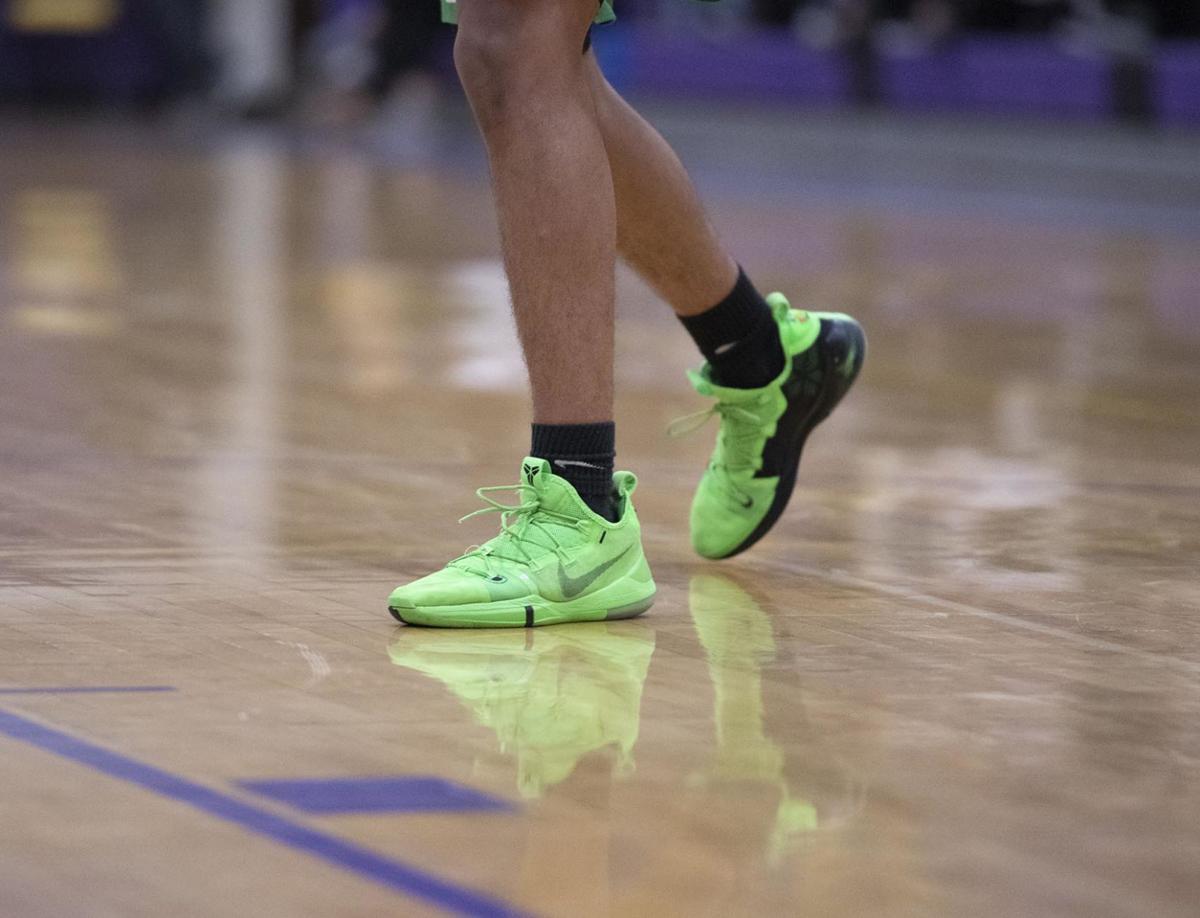 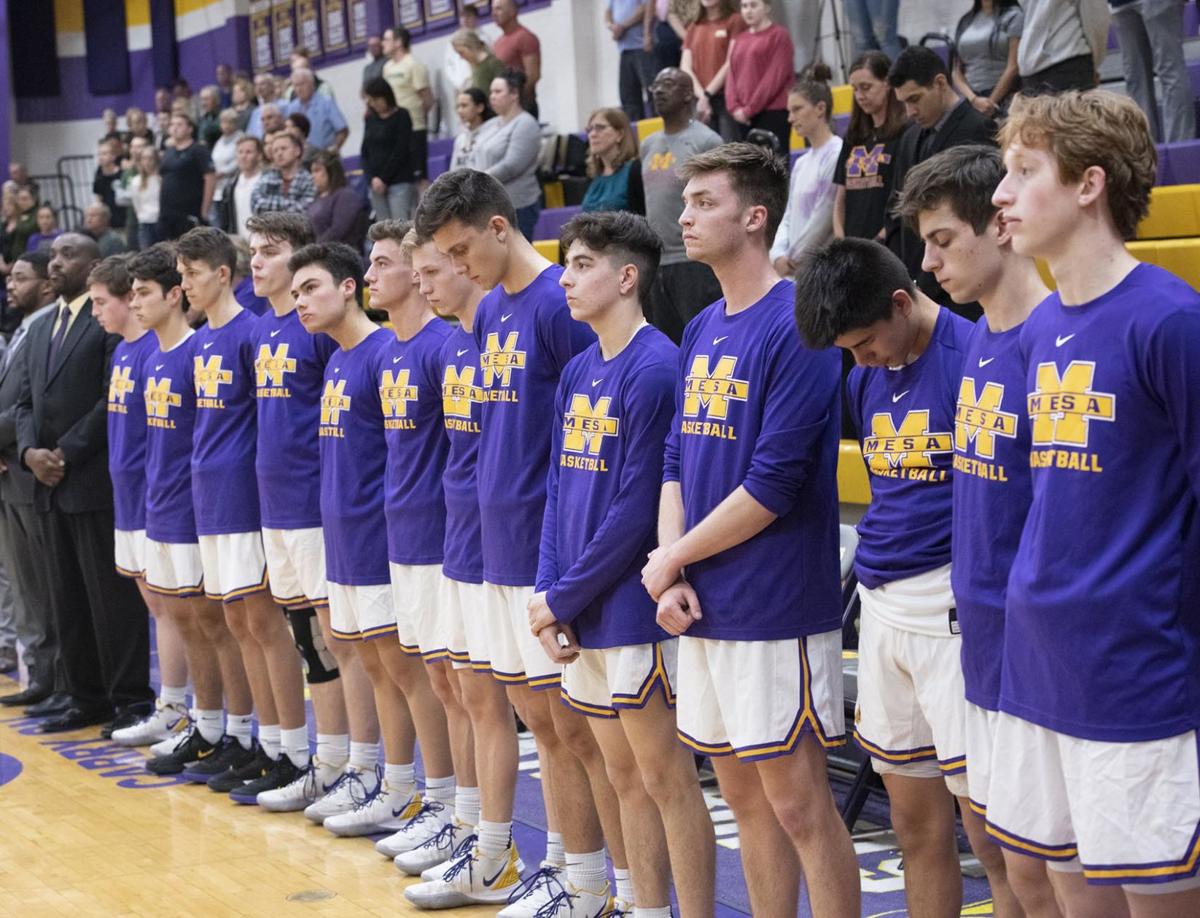 The Mesa High basketball team joined in on a moment of silence during a 24-second runoff in honor of Kobe Bryant before their game against Skyline on Tuesday night. 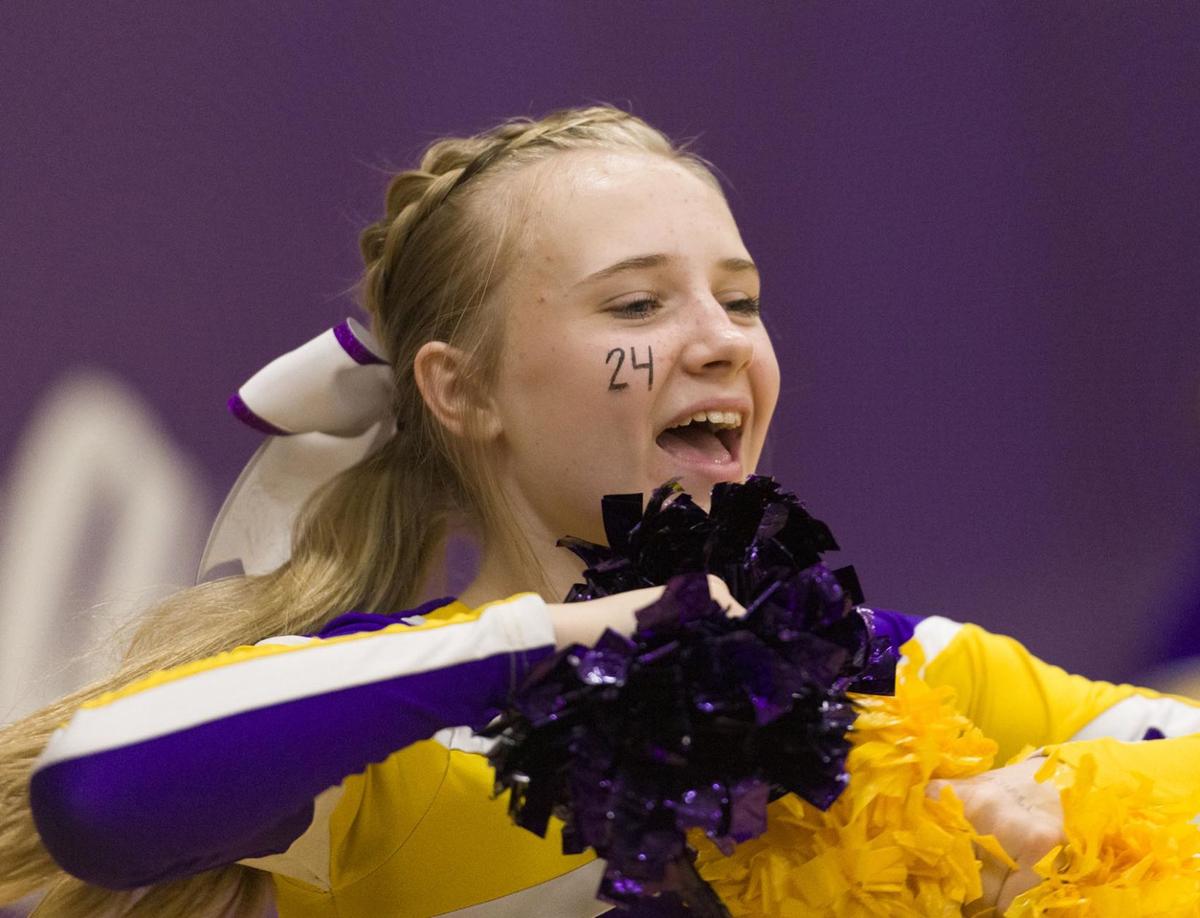 Mesa High cheerleaders wrote “24” on their cheeks in honor of Kobe Bryant during the Jackrabbits game against Skyline Tuesday night.

A Mesa High student wearing a Kobe Bryant jersey looks on during the Jackrabbits’ game against Skyline on a night the late Lakers star was honored.

The Mesa High basketball team joined in on a moment of silence during a 24-second runoff in honor of Kobe Bryant before their game against Skyline on Tuesday night.

Mesa High cheerleaders wrote “24” on their cheeks in honor of Kobe Bryant during the Jackrabbits game against Skyline Tuesday night.

Jackrabbit cheerleaders, with “24” written on their cheeks stood at the far baseline as both Mesa and Skyline basketball teams remained on the floor.

Virgil Schatz, Mesa’s longtime public address announcer put 24 seconds on the clock. The gym fell silent to honor five-time NBA champion Kobe Bryant, his daughter, Gianna, and the seven others who tragically passed away on Sunday in a helicopter crash outside Los Angeles.

Mesa and Skyline both observe a moment of silence and a 24 second runoff in honor of Kobe Bryant, his daughter, Gianna, and the seven others that tragically passed away Sunday #VXLive pic.twitter.com/NdZIcJXsSk

"Everything he meant to the game, I just felt bad for him and his daughter," Mesa coach Scott Stansberry said. "He was one of the all-time greats. He means a lot to everyone in the NBA and he means a lot to all these kids who grew up watching him. It was great to honor him."

Stansberry grew up a fan of the Boston Celtics. Like most Phoenix Suns fans, he relished any opportunity his team had to beat the Kobe Bryant-led Los Angeles Lakers.

Though while he openly shared his hatred for the NBA legend, he also expressed the tremendous amounts of respect he had for the player that had such a great impact on the game of basketball.

"I am a huge Kevin Garnett fan, so those times we got him it was like, 'we beat them, we beat Kobe,'" Stansberry said. "He was the reason I hated the Lakers, but I also had so much respect for him. He's that guy, he brought it. It was a shock this weekend."

He told each player he wanted them to mimic the play of Bryant during his illustrious career.

"We had a pregame talk and prayer about what happened and what we had to do tonight to honor his legacy," Capriotti said. "I wanted them to do what he did and compete. I think the boys got that message and I think they came out here and competed.

"The 24 seconds was a nice touch. Anytime two Mesa schools can come together and do something like that it's special."

Skyline found a rhythm in all facets of the game. The Coyotes swarmed Mesa on defense while they used their speed and sharpshooting ability on offense.

Senior guard Dayton Harris, a Northern Arizona University signee, scored early and often for Skyline while representing one of his favorite players.

"It was a special night, he's been an idol of mine since I could remember," said Harris, who wore lime green Kobe AD basketball shoes during the game. "I remember I would always get in trouble for writing 'Kobe Bryant' all over my room in sharpie. The 24-second moment was emotional. It's just sad what happened."

With Skyline already on the brink of forcing a running clock late in the third quarter, Harris went to the bench and never returned. The senior finished with 12 points, all of which came in the first half.

He scored 18 points in the win while wearing a pair of Kobe 8s.

"I'm a big shoe person and what happened to Kobe was tragic," Dominic said. "It's sad. He's one of the greats."

As it has all season, Skyline received contributions from more than just the two brothers. By the time the first quarter ended, all five of the Coyote starters had recorded points, as Skyline jumped out to a 21-6 lead after 8 minutes.

Tanner Poeschl, Skyline’s 6-foot-8 forward, was a menace on the defensive end of the floor, blocking nearly every shot attempt in his direction. His effort, combined with junior guard Patrick Herrera’s on-ball defense creates several opportunities for Skyline to increase its lead throughout the game.

Mesa, after scoring just 11 first-half points, found a rhythm in the third quarter thanks in large part to junior guard Steven Cervantes and his ability to create open looks for his teammates.

But even as Mesa tried to narrow the gap, Skyline never lost control of the game and cruised to victory.

"We have to learn we can't play a top-five team in the state and not show up in the beginning," Stansberry said. "We just have to keep getting better and learn from it. Westwood is a good team and if we don't show up they'll hurt us."

The loss is the third straight for Jackrabbits (8-14), whose last win came against Dobson a week ago. Mesa faces Westwood on Friday.

Skyline (21-2), meanwhile, is riding a 13-game winning streak that started back on Dec. 20 following a tough loss to Highland. The Coyotes are currently ranked fourth in the AIA rankings, and with four games left until the start of the playoffs, they hope to make one last push toward a higher seed.

"We have a March Madness mentality," Capriotti said. "Every game is important and every game is win or go home for us. We enjoy this win tonight and get ready for Mountain View.

"It's another opportunity for us to get better and win another game."