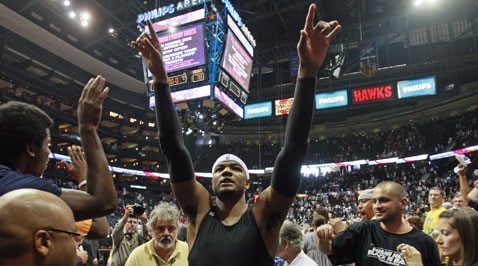 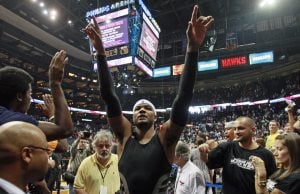 Atlanta Hawks forward Josh Smith reacts to the fans as he leaves the court after defeating the Miami Heat 91-78 in Game 7. May 3, 2009.

Atlanta Hawks forward Josh Smith reacts to the fans as he leaves the court after defeating the Miami Heat 91-78 in Game 7. May 3, 2009.

ATLANTA — Joe Johnson was tired of all the double- and triple-teaming. So he put up a shot before Miami could get an extra defender on him. From about 30 feet away. Swish.

After a mostly disappointing series, Johnson finally showed up when the Hawks needed him most, making six 3-pointers and scoring 27 points to lead Atlanta into the second round of the playoffs with a 91-78 victory over Dwyane Wade and the Heat in Game 7 Sunday.

Atlanta got past the first round for the first time since 1999.

Their reward? A matchup with LeBron James and the top-seeded Cavaliers, beginning Tuesday night in Cleveland.

Johnson, the Hawks' top scorer during the regular season, was held under 20 points in five of the first six games by the Heat. It looked like more of the same when he missed his first five shots of the decisive contest.

Then, suddenly, he found his range. First, a 3-pointer from just outside the line. Then, on Atlanta's next possession, he pulled up near the tip of the winged logo at center court — a good 7 to 8 short of the arc — and launched another one. Nothing but net, even after he got a bit of a hip check from a startled Wade, who looked off toward the stands in disbelief after the ball went through.

"I was just trying to be more aggressive," Johnson said. "I haven't put up a 3 that long in a while. I said, 'Forget it,' and just launched it. Making that got me into a little rhythm."

He finished 6-of-8 from beyond the arc, leading the Hawks to the final blowout in a series that was totally devoid of any drama. Every game was decided by at least 10 points.

After a back-and-forth first quarter that ended with Atlanta ahead 20-18, the Hawks pulled out to a 49-36 lead by halftime.

They might as well have started the celebration right then.

There were only 15 lead changes in seven games — not one of them after the opening period.

The Hawks turned the contest into a laugher in the final quarter. Flip Murray hit a 3-pointer to give Atlanta its biggest lead, 85-66, and both teams cleared their benches in the closing minutes.

Things got ugly late while the Hawks fans chanted "Hey, hey, hey, goodbye!" Zaza Pachulia, who provided more quality minutes off the bench, drove to the hoop and was collared around the neck by Udonis Haslem. The Miami forward was tossed out of the game for a flagrant foul, while Atlanta coach Mike Woodson charged onto the court to make sure no punches were thrown.

The Hawks will need everyone for the Cavaliers, who have lost only two games at home all season.

Miami is done, its finale epitomized by Haslem's inglorious exit. He ripped off his jersey on the way to the locker room, throwing it into the crowd before he disappeared down the tunnel.

Still, it was quite a comeback season for Wade and the Heat, which bounced back from a dismal 15-67 record to make the playoffs as the fifth seed in the East.

"I'm very encouraged by this season," said Wade, who scored 31 points. "The team that won 15 games last year came back to win 43 games this year and took Atlanta to seven games in the playoffs. We've got something to build on."

Wade scored 31 points but the majority of those came after the Hawks had already built a comfortable lead. Bothered by back spasms throughout the series, he didn't have enough help from his young teammates to get through to a matchup against James in the second round.

Instead, it's the Hawks moving on. Red and silver streamers fell from the roof of Philips Arena as the horn sounded, celebrating the team's first playoff series win since a five-game triumph over Detroit in 1999. That team was swept by New York in the next round and then drifted into irrelevance, enduring nine straight losing seasons before this year's 47-35 mark was good enough for home-court advantage in the opening round of the playoffs.

A year ago, the Hawks learned the benefits of playing Game 7 at home. After taking the eventual NBA champion Celtics to the limit, Atlanta was blown out in the decisive game at Boston.

This time, the Hawks got to play at home, and they doled out the same treatment to Miami.

Mike Bibby might have been the Hawks most valuable player in the series. He averaged just under 15 points and 5 assists in the seven games. He even stood up to Woodson when the coach complained about Josh Smith (21 points) putting up an errant 3-pointer from the corner.

When Woodson called his point guard over, Bibby shot back with an expletive. "Y'all tell him to move," Bibby growled.

Woodson simply turned away, rubbing his goattee and smiling slightly.

This was the first Game 7 ever played in Atlanta. As if that wasn't unusual enough, the Hawks had not won a Game 7 since 1961 — when the franchise was still in St. Louis.

"It feel like the monkey's off Atlanta's back," Smith said. "Not just the team's back. The whole city."

Notes: Joey Crawford was part of the three-man officiating crew for Game 7. About two miles away, his brother, Jerry, was the first-base umpire for the Braves' game against the Houston Astros.

Al Horford had 7 points after missing Game 6 with a sprained ankle.

Jermaine O'Neal, who sat out the previous contest with a a concussion, played just 42 seconds after being cleared by doctors before the game.

The late-arriving crowd of 18,864 was just short of a capacity, ending Atlanta's streak of six straight playoff sellouts.