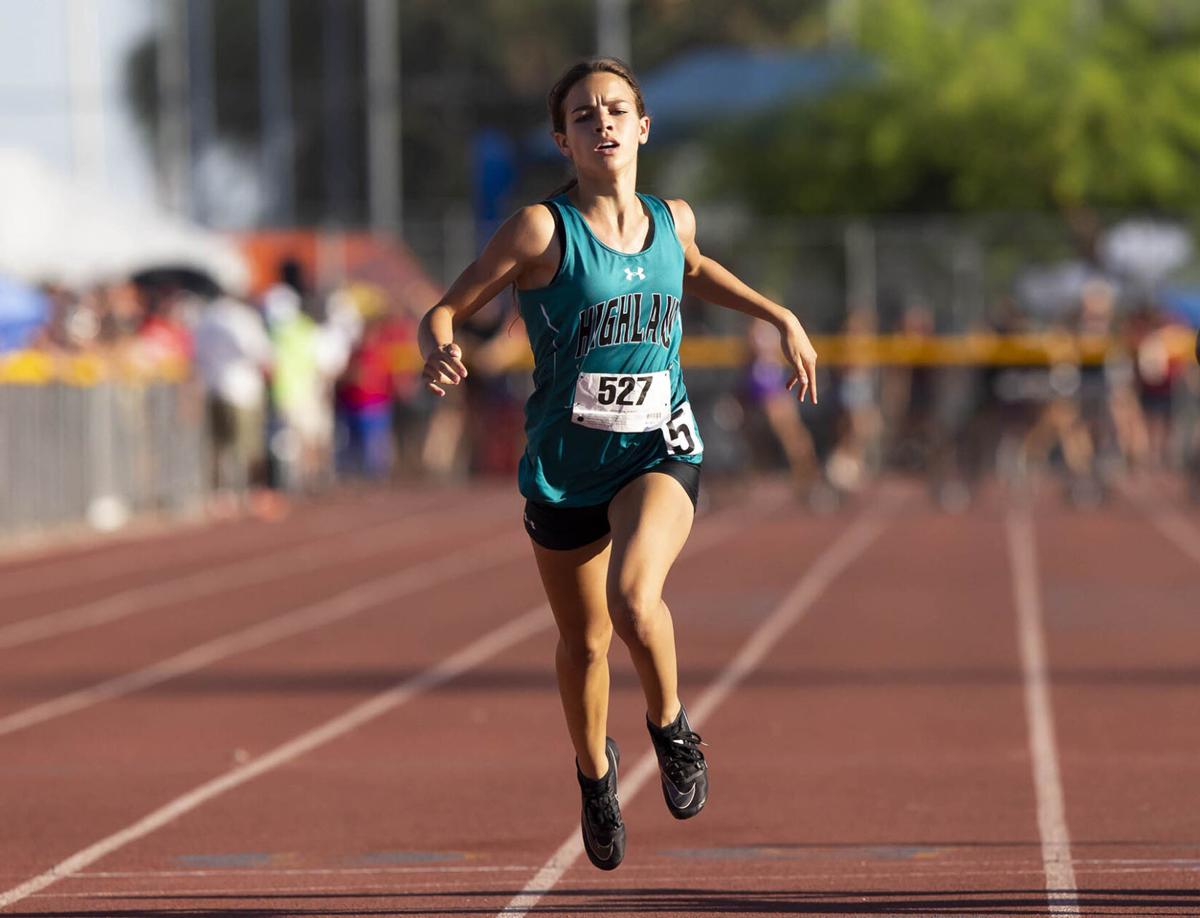 Highland sophomore Lainey Jones has emerged as one of the state’s top sprinters after her contribution to the Hawks’ second-place finish at state. 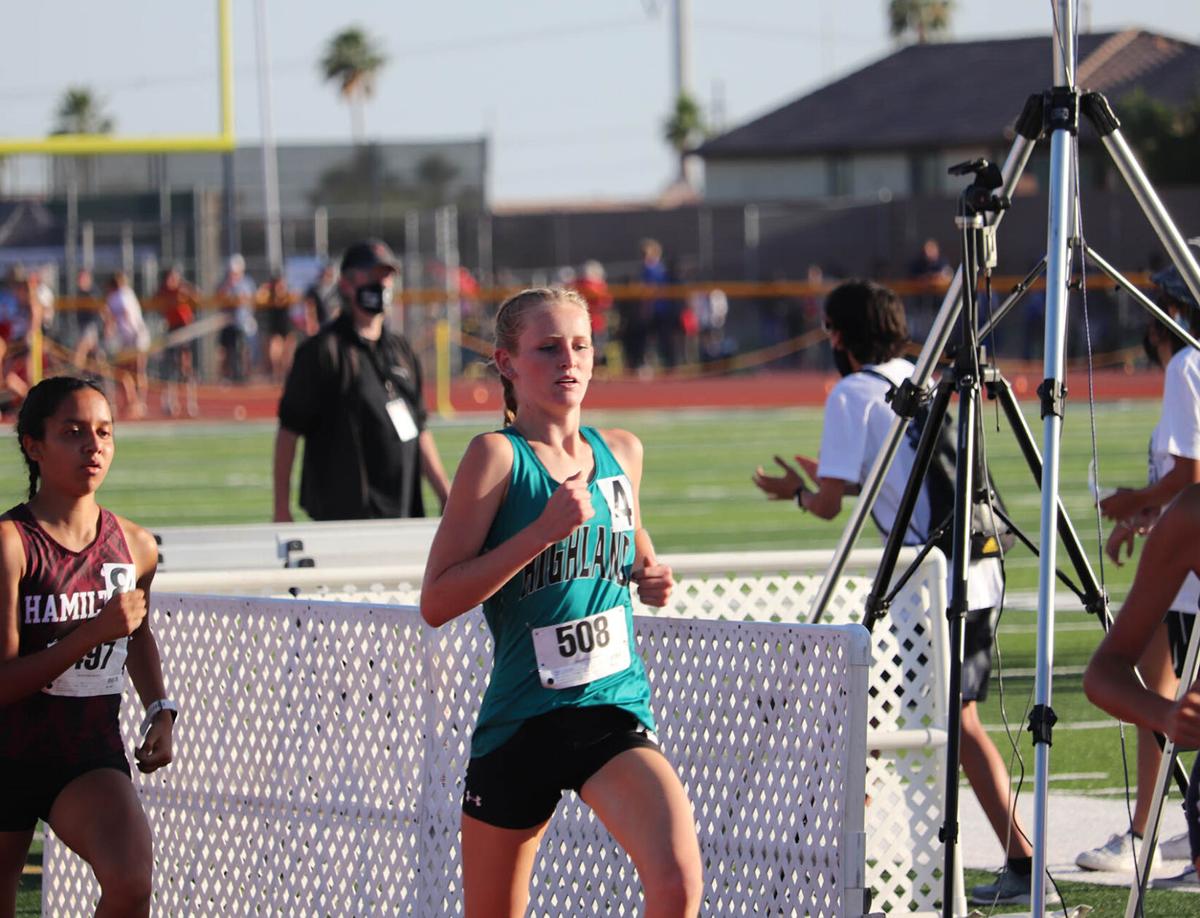 Highland sophomore Emma Baugh took third in the 1600-meter run after finding extra motivation to overtake a Perry runner in the last 100 meters. 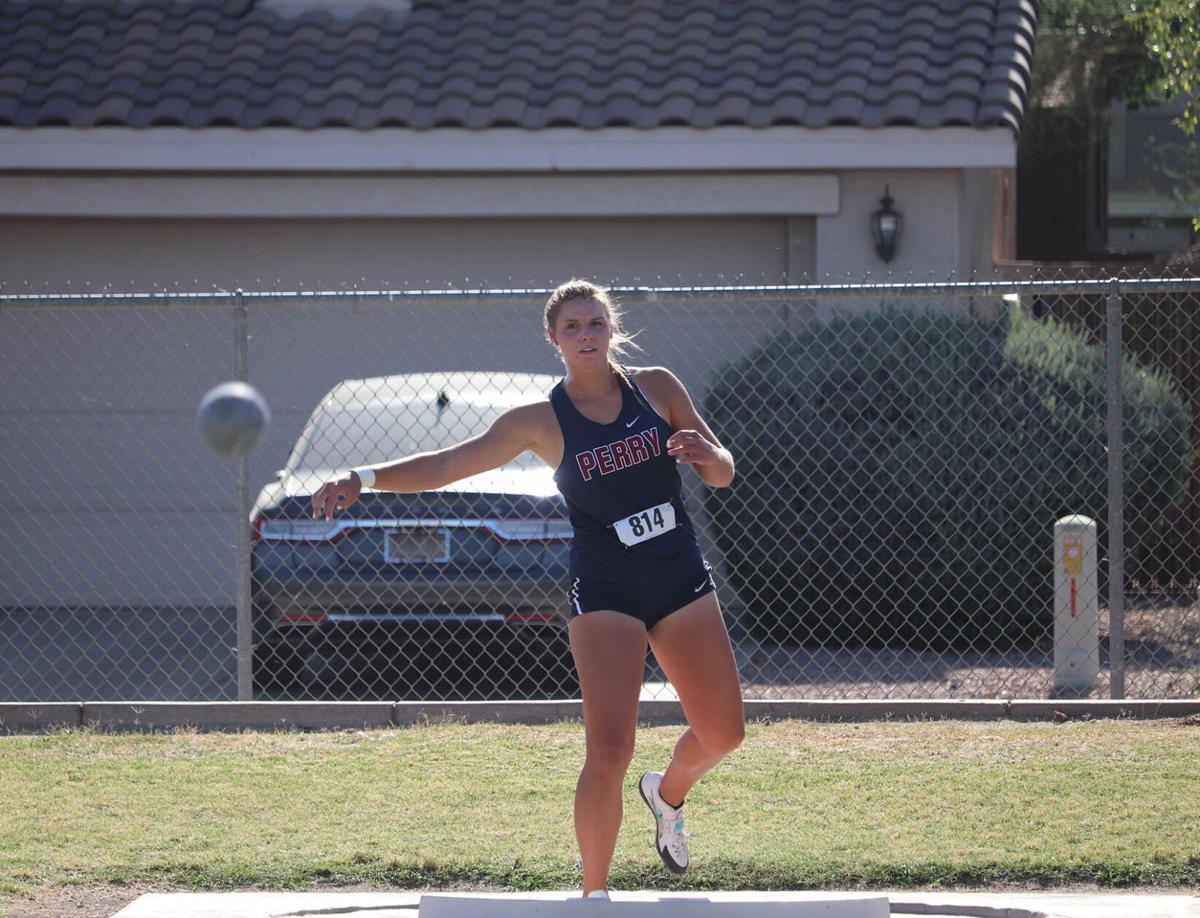 Perry senior Makayla Long capped off her high school career by winning both the discus and shot put state championships. 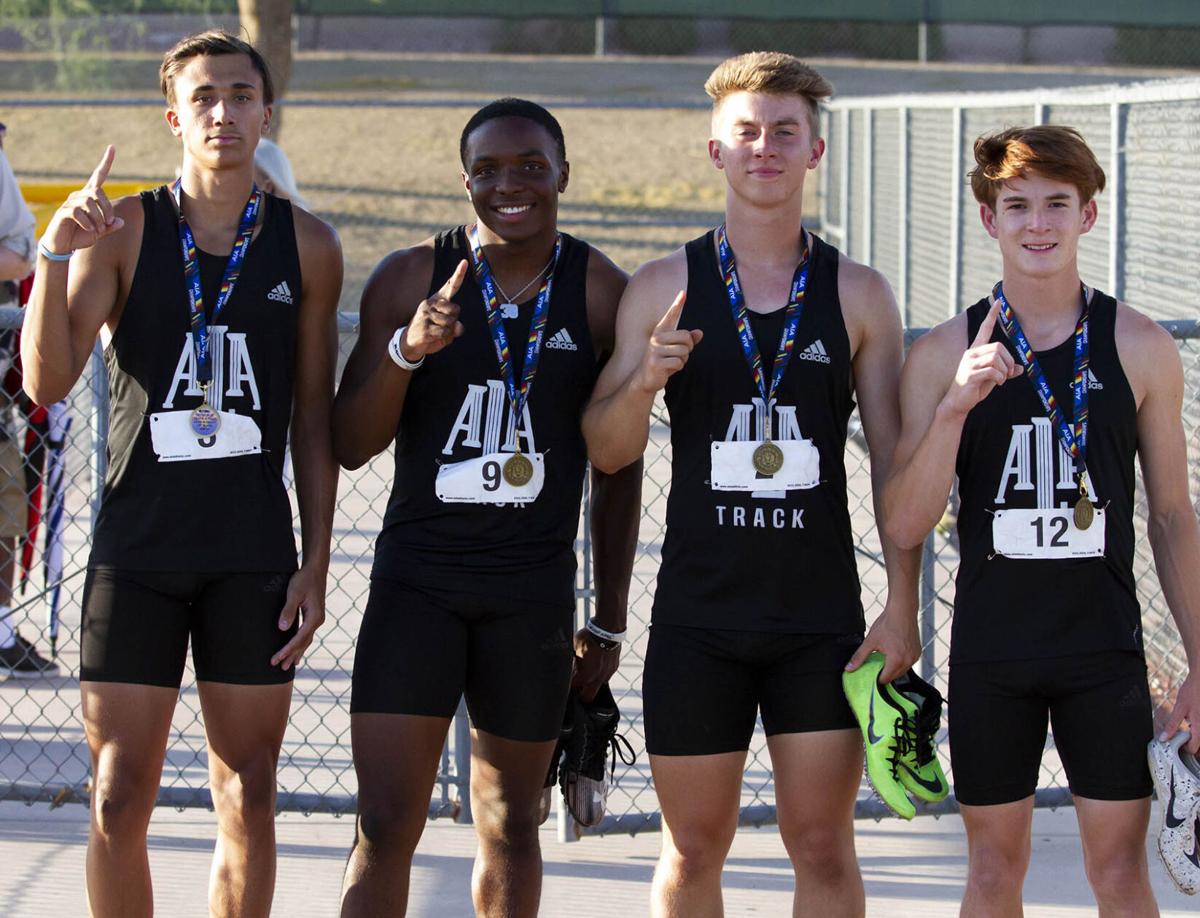 Highland sophomore Lainey Jones has emerged as one of the state’s top sprinters after her contribution to the Hawks’ second-place finish at state.

Highland sophomore Emma Baugh took third in the 1600-meter run after finding extra motivation to overtake a Perry runner in the last 100 meters.

Perry senior Makayla Long capped off her high school career by winning both the discus and shot put state championships.

The 2021 track & field state championships saw the emergence of future powerhouse programs and a star on one of Gilbert’s best teams year in and year out.

Overall, Gilbert schools were well-represented on the championship podiums, with Highland and Williams Field’s girls placing second overall in their respective divisions. But there were plenty of individual honors also handed out during the two-day event.

“I think I’ve only scratched the surface of my potential,” Highland sophomore Lainey Jones said. “It was super cool to be able to compete and I think I will only get better.”

Highland’s track & field program competes for a state championship on a regular basis as head coach Monty Montgomery continuously finds ways to reload his roster with athletes. This year, after the pandemic forced the cancellation of the 2020 season, he unleashed Jones, a super sophomore that has already established herself as one of the top sprinters in the state.

Jones challenged defending champion Trinity Henderson from Chandler in the Division I 100-meter dash championships on Saturday, May 15. Her time of 11.88 seconds was just .6 shy of Henderson’s mark, good for second place and the first medal of her high school career.

Despite her young age, Jones never shied away from the competition or the spotlight. She went on to compete in the 200-meter dash later on and took third overall, medaling once again. She also helped Highland’s 4x100-meter relay team place second overall and the 4x400 team win gold, securing more points for her team that later proved to be the difference in the final rankings.

“I love my team and I’m thankful for the opportunity to help them toward winning state,” Jones said.

Highland’s girls finished the meet second overall with 83 team points, narrowly defeating Desert Vista with 80. Along with Jones’ contribution, Highland also received an added boost from early in the meet from fellow sophomore Emma Baugh, who finished third in the 1600-meter final after overtaking Perry’s Taylor Lovell in the final 100 meters.

Baugh was also racing in the state meet for the first time, and it just so happened she faced arguably two of the state’s best distance runners in Desert Vista’s Lauren Ping and Katie Sigerud. Still, Baugh held her own to finished in 5 minutes, 3.78 seconds. She also went on to place fourth in the 3200.

“I’m really happy, especially with my final kick,” Baugh said. “I was thinking to myself, ‘should I go get it?’ and I figured, ‘why not?’ I had a lot of adrenaline going into the race and I think when I had that straight away I could hear my teammates cheering me on and I went for it.”

Perry senior Makayla Long entered the state track & field meet with a bit of a chip on her shoulder after her personal and state record throw of 53-feet, 3.5 inches still wasn’t made official.

She used that motivations, most of which built up frustration, to capture the Division I girls shot put and discus state titles. Her state-record shot-put throw of 50-feet, 8 inches was nearly 8 feet further than second-place thrower Makayla Long of Chandler, who also placed second in the discus.

Long continues to hold out hope her 53-foot throw at Red Mountain Rampage in April will be officially marked as the record. Nonetheless, she was pleased with her performance overall to close out her high school career.

“It’s been a bit of a controversy in regard to my other throw,” Long said. “I’m not sure if they are going to appeal it or not but it’s great to always improve and be consistent at the 50-foot mark. I’ve come up short in year’s past so to finally have it in the bag feels awesome.”

Sophomore Saira Prince helped the Blackhawks gain early points by winning the 100-meter hurdles. She also placed second in the 300-meter hurdles later on in the meet. Senior Alyssa Colbert, running for the last time, finished second overall 100-meter dash and was part of Williams Field’s 4x100-meter relay team that placed fourth. Prince and Colbert also teamed up with Kianna Jones and Jacklyn Trice to place second in the 4x400-meter relay.

Along with Williams Field, Campo Verde’s girls also had a strong showing at the Division II level, placing fourth overall.

American Leadership Academy Gilbert North’s boys track & field team didn’t see the result it wanted in the overall team scores but picked up a state championship in the 4x100-meter relay in an upset.

The Eagles qualified with a time of 42.70 seconds during preliminaries the Friday before the meet. They were behind only Peoria at 42.62 seconds. The Panthers had been the frontrunners for the state title in the event all season long. But ALA was confident it could walk away with gold medals.

Adam Damante ran the final leg of the race and let out a boisterous cheer when he crossed the finish line at 42.28 seconds, the fastest time ever in ALA Gilbert North program history. He hugged relay teammate Emeka Ogbonna near the finish line before they were joined by Tristan Carrera and Justin Provenzano on the podium.

“We came into it knowing we were going to win that race, we had been preparing for it the entire season,” Damante said.

“We were confident in ourselves,” Ogbonna added. “Peoria gave us a little shock with the time they ran (Friday) but we knew it was going to be a great battle and we would come out on top.

“At the end of the day, our team chemistry has been what helped us all year long. We all trusted each other to be at the top of our game today.”