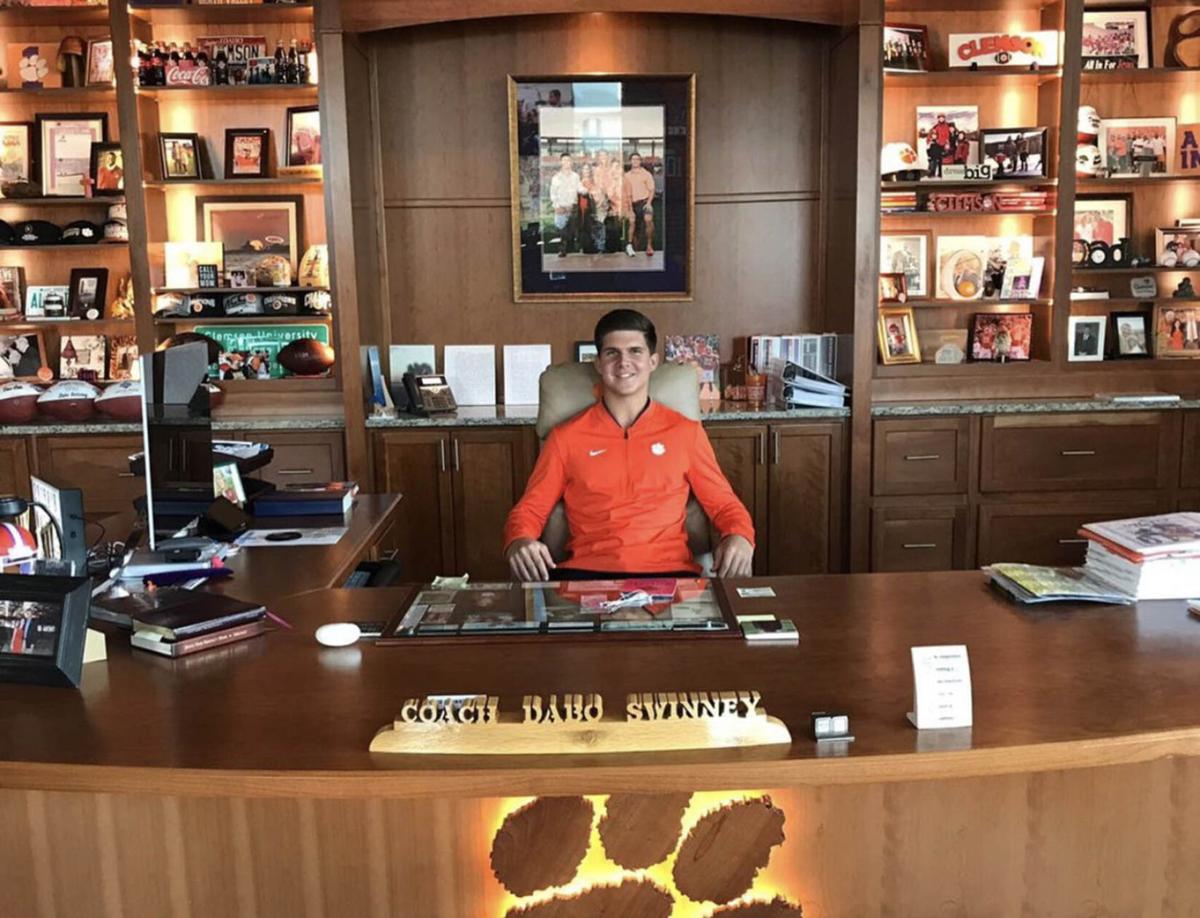 Gilbert High School alum Alex A.J. Gardner, a South Carolina native, fulfilled his dream of putting on a Clemson uniform during his role in the Disney movie, “Safety,” which released Friday, Dec. 11 on Disney Plus. 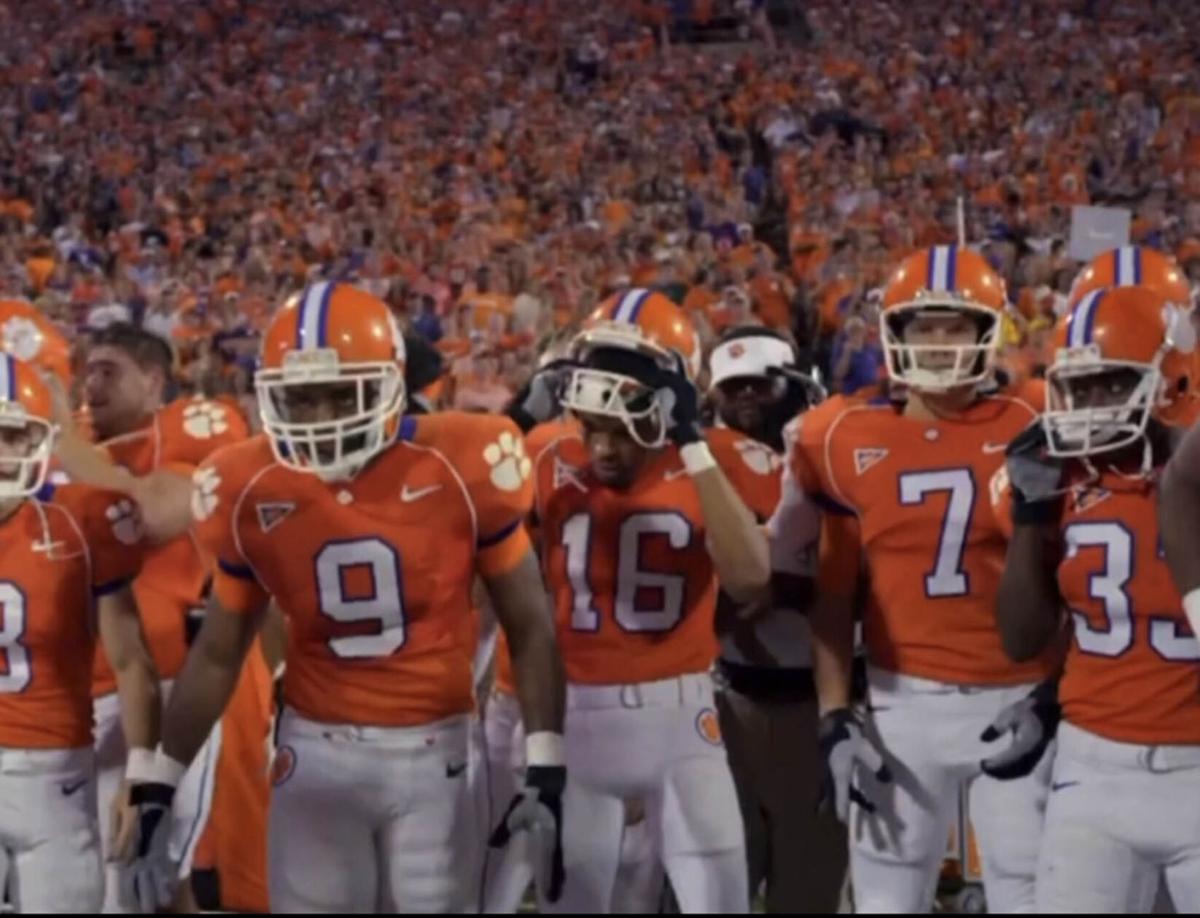 Gardner played the role of a football player at Clemson and wore the No. 7 jersey in practice and game scenes, one of which was filmed at halftime of a Tigers’ game at Clemson Memorial Stadium in South Carolina.

Gilbert High School alum Alex A.J. Gardner, a South Carolina native, fulfilled his dream of putting on a Clemson uniform during his role in the Disney movie, “Safety,” which released Friday, Dec. 11 on Disney Plus.

Gardner played the role of a football player at Clemson and wore the No. 7 jersey in practice and game scenes, one of which was filmed at halftime of a Tigers’ game at Clemson Memorial Stadium in South Carolina.

Alex A.J. Gardner sought a new path when he graduated from Gilbert High School in 2017.

With an outgoing personality, he decided to try his hand at acting. He had never done it before but soon after found himself chasing a role in the movie, “Safety,” which released Friday, Dec. 11 on Disney Plus. The movie depicts the true story a former Clemson football player.

Gardner played the role of one of the Clemson football players, appearing in practice and game scenes. It was special to him for a variety of reasons. But most importantly, it allowed the South Carolina native him to fulfill one of his childhood dreams

“Growing up in South Carolina, you’re either a (Clemson) Tiger or a (South Carolina) Gamecock,” Gardner said. “Putting on the jersey, it kind of left me speechless. I don’t think I was able to really grasp how big of a moment it was.”

Gardner traveled to Clemson, South Carolina for the movie role. He spent several weeks there filming the various practice and game scenes. He was outfitted with official Clemson gear — from the helmet to the jersey, pants and even cleats Tiger players wear on game days.

One scene was filmed during halftime of one of Clemson’s games in 2019. Gardner and the rest of the cast of football players even replicated part of the team’s entrance.

When Clemson enters Memorial Stadium for home games, it often brings chills to spectators both in person and watching on national tv. In 2013, when eighth-ranked Clemson hosted fifth-ranked Georgia in prime time, the ESPN cameras captured every moment of one of college football’s greatest traditions.

The players were bussed from one end of the stadium up the hill to the other. One by one players filed out and entered the gates of the stadium to touch Howard’s Rock — Clemson’s good luck charm. Then, they storm down a hill leading to the field surrounded by fans on either side. Brent Musberger, part of the national broadcast for ESPN that game, called it the “most exciting 25 seconds in college football.”

“It felt like the real thing,” Gardner said. “Running down the hill was a dream. We did it in front of the all the fans at half time, so it was pretty cool. We did a couple of football scenes like a kickoff. All of the fans got to be part of the movie.”

Gardner and his family moved from South Carolina to Gilbert in 2015. He attended Gilbert High School where he played football and soccer for the Tigers. After a season of soccer, he decided to stick to football only. But his career was quickly shortened after an injury that led to his hamstring muscle separating from the bone.

He remained with the team despite his inability to play and began thinking about his next step after high school. He was never involved in the school’s drama department or had interest in acting until after high school, but when he saw the role of being a Clemson football player, he knew it was one he had to go for.

“I wanted to do something new and get out of my comfort zone,” Gardner said. “I didn’t really have an interest until this movie came about and it was about Clemson. I thought I would try it and I just ended up loving it.”

Gardner was called several weeks later for casting, and soon after that was on a plane back home to South Carolina to film. The scenes he is in took a couple of weeks to film. The movie as a whole took a few months.

“Safety” depicts the true-life events of former Clemson player Ray-Ray McElrathbey, who came to Clemson on a football scholarship in 2006. While there as a freshman, he received a call from his younger brother, Fahmarr, who was in a difficult situation due to their mother relapsing and father not at home. McElrathbey took Fahmarr in and had him stay with him at Clemson, ultimately putting his scholarship on the line. He was forced to move to off-campus housing but received support from the Clemson community.

The movie can be streamed on Disney Plus.

“I still haven’t really grasped the fact that I’m in a movie about Clemson,” Gardner said. “I think when I watch it, it’ll really hit. Who would’ve thought I would start my acting career in a Clemson movie? It’s kind of surreal.”

With the coronavirus pandemic still raging on in the United States, the film industry has slowed. Gardner said he has a few potential roles in upcoming productions lined up but doesn’t know when or if they will be finalized.

For now, he plans to enjoy his first movie and see where his career leads him in the future.

“The pandemic has made it hard, but I have a few things lined up,” Gardner said. “But I’m not really trying to force it. If opportunities come to me then they come.”