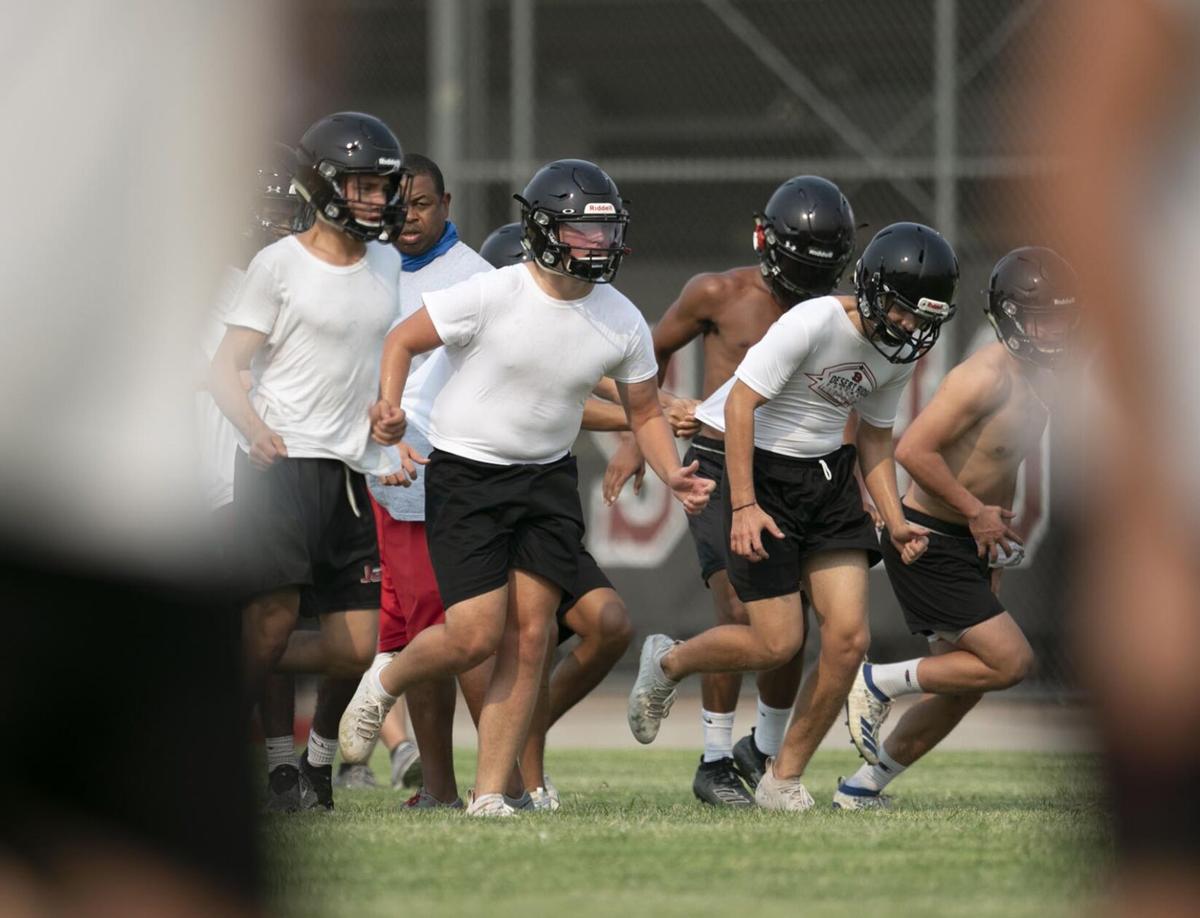 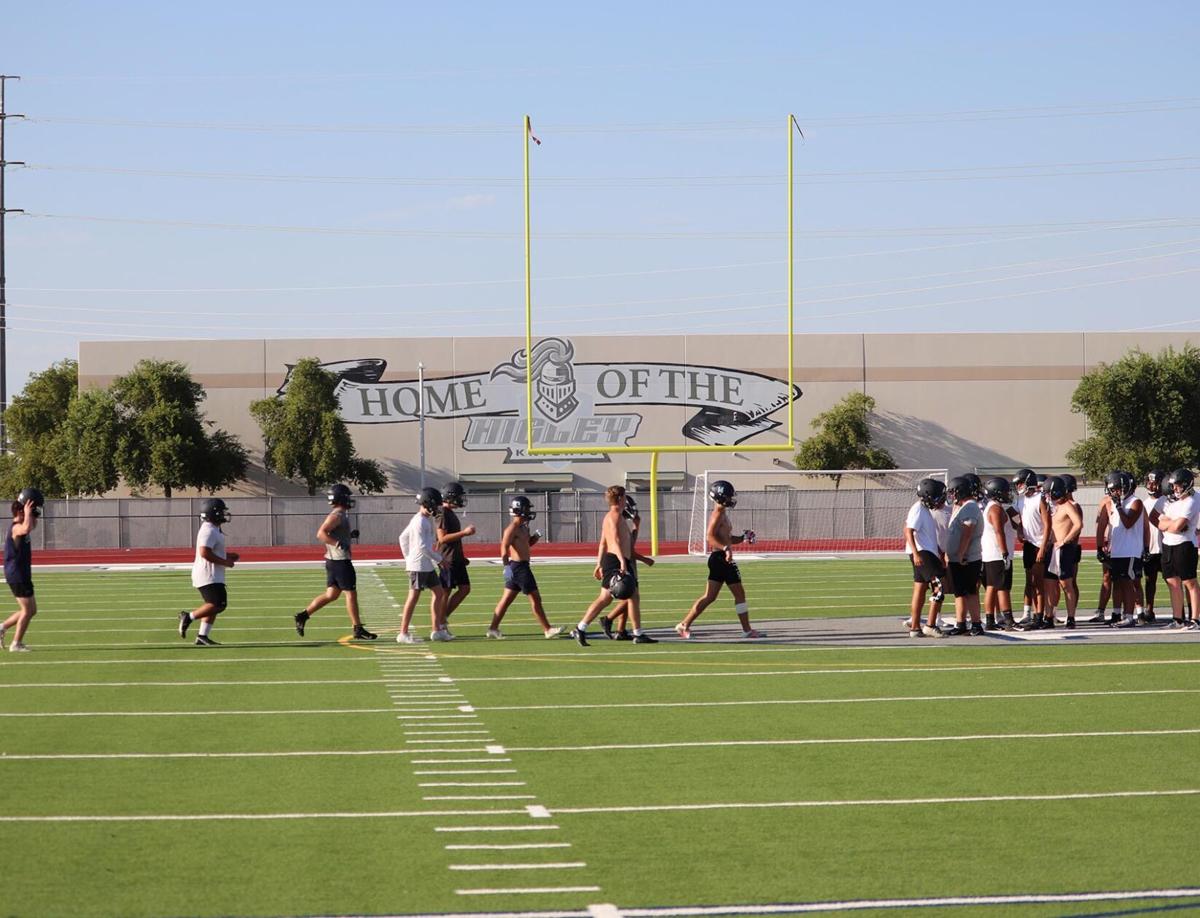 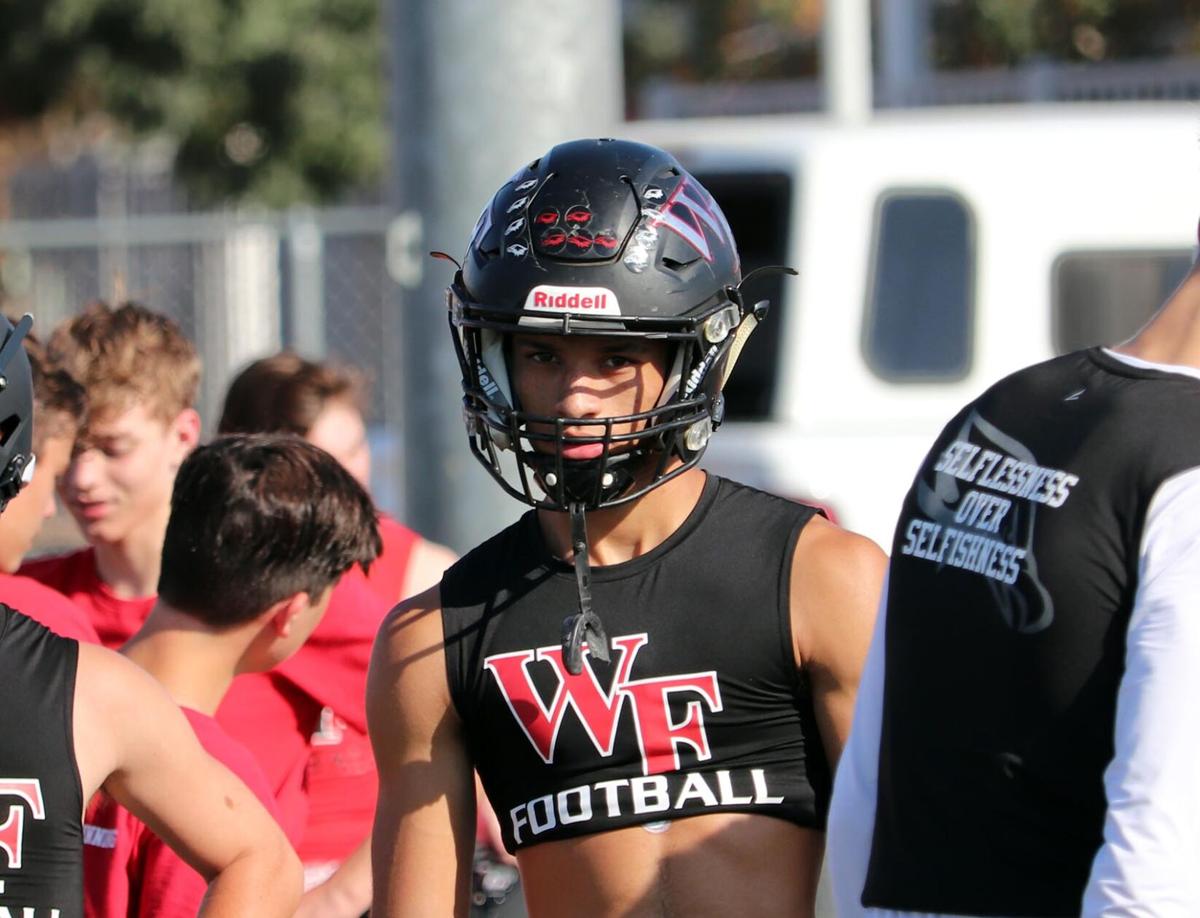 Williams Field senior wide receiver Myles Taylor said the first week of practice still felt different due to restrictions, but overall, he was happy to be in this position. 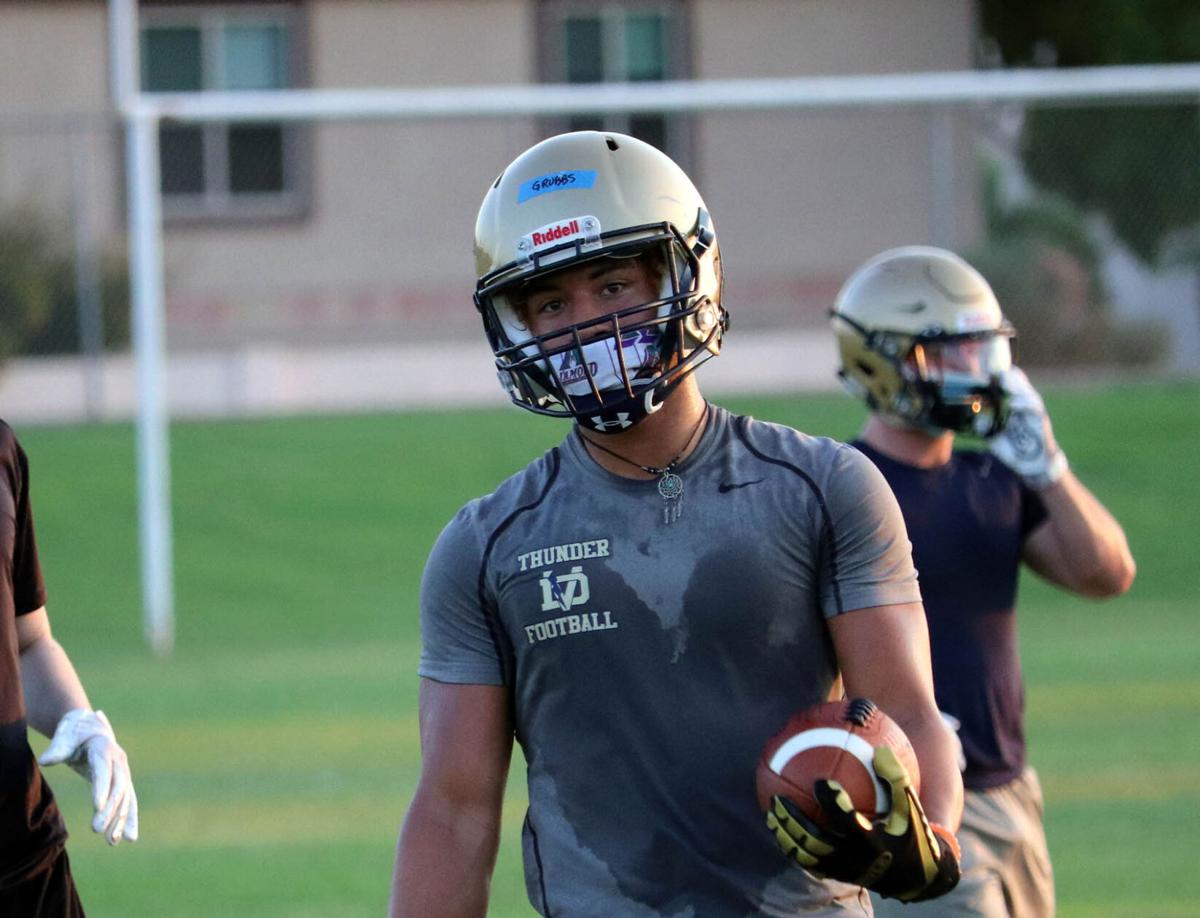 Desert Vista junior running back Devon Grubbs said wearing a face mask under his helmet, as part of a guideline by Tempe Union High School district, is difficult to get used to but is necessary to begin the season. 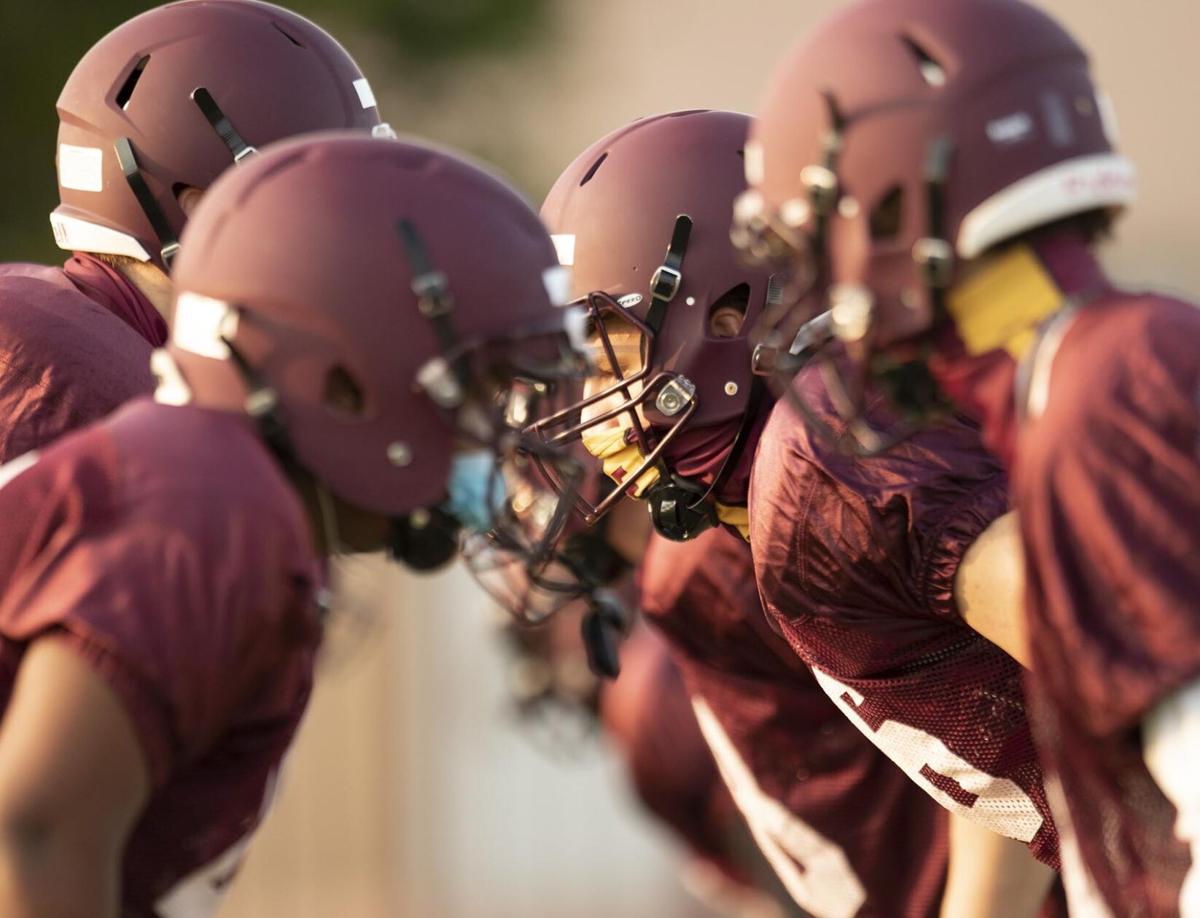 Williams Field senior wide receiver Myles Taylor said the first week of practice still felt different due to restrictions, but overall, he was happy to be in this position.

Desert Vista junior running back Devon Grubbs said wearing a face mask under his helmet, as part of a guideline by Tempe Union High School district, is difficult to get used to but is necessary to begin the season.

The first week of football practice for high school programs across the East Valley has come and gone, offering a slight sense of normalcy for both players and coaches.

But even as players snapped their chin straps and adjusted helmets to their liking, several signs still pointed to a world still in the middle of a pandemic.

“It’s definitely different,” Williams Field senior wide receiver Myles Taylor said. “Everybody is going to do what we have to do in order to play. But it feels amazing to just be out here with my team. It’s almost a relief.”

Water bottles and other personal belongings scattered the sidelines, as restrictions put in place by districts and the Arizona Interscholastic Association prohibit players from sharing a traditional water source. Backpacks, shoes and other parcels of clothing lay nearby instead of tucked away inside a locker like in year’s past.

Without helmets on at Higley and Williams Field high schools, players are encouraged to separate and wear masks. All coaches on the field are also masked up.

This season, coaches have added responsibility. Not only are they preparing for a football season, but also to make sure players stay healthy and follow guidelines.

“It’s a lot of more precautionary things that we have to get used to,” Williams Field head coach Steve Campbell said. “Usually we would have water caddys out here but now if a player runs out of water in their bottle, we have to make sure they get more. When we are inside our facilities, we have to separate them out to make sure there aren’t too many in one space.

“It’s just those types of procedures we are trying handle as best we can.”

Higley head football coach Eddy Zubey echoed Campbell’s comments while he praised his administration and the district for deriving a clear path for all fall sports teams to proceed.

There was no contact amongst players, something that is relatively common when only wearing helmets this early in the season. Players often worked with tackling dummies and other bags, while also doing cardio drills.

Higley senior quarterback Kai Millner, a California-Berkeley commit, said he had been looking forward to putting on his helmet. Especially after a summer filled with uncertainty surrounding football and other fall sports, it raised the bar of excitement for him and his teammates.

“It’s amazing,” Millner said. “I mean, we’ve been out here a little bit but to officially start the season, to come out here and put on the helmets and see everybody working, it’s super exciting.”

On Tuesday, however, the intensity was turned up a notch.

Running backs worked with one another in a forced-fumble drill. Skill players, including senior quarterback Austin Kolb, worked the run-pass-option. Linemen hit the five-man sled with Angelo Paffumi, who was previously the head coach at nearby Skyline.

Hathcock said it was “special” to see his team in helmets for the first time.

“Man, when you realize you’re one of 20, 25 states to do that, it’s a special treat,” Hathcock said. “It’s one of those things where you feel like an 8-year-old in pop warner getting ready to play your first game again.”

Kolb, who is poised for a breakout senior year, said he was grateful to be at this point. Just three months ago, when Arizona was at the peak of the pandemic with nearly 4,000 new COVID-19 cases per day, the possibility of having a fall sports season looked grim.

Now, however, with helmets on and teams preparing for a season despite certain metrics from the AIA’s Sports Medicine Advisory Committee still casting a sliver of doubt, Kolb is eager to keep progressing through the season.

“It feels great to just be with my teammates practicing again,” Kolb said. “We had a lot of uncertainty during this pandemic. To just be back out here, it feels great.

“We know there was a lot of time wasted. We are just using all the time we have every day to get better as a team.”

The AIA Executive Board voted to adopt the recommendations from SMAC for a return to fall activities. Football, being the most at-risk sport for virus transmission, had stricter guidelines put in place for games to begin as scheduled on Oct. 2. Two of the three metrics can be or already have been achieved by several counties. But achieving 10 cases per 100,000, which is recommended by SMAC, is the challenge.

Even so, AIA Executive Director David Hines has said the guidelines can be updated. If and when that happens remains to be seen.

Regardless, some districts have taken on a stricter approach to practice to help meet those benchmarks.

“Spread out,” “6-feet apart,” “masks on” and “keep your distance” are phrases repeated by the minute by Desert Vista’s athletic training staff. There is little to no pushback from players, and coaches often echoed the demands.

The Thunder, part of Tempe Union High School District, are doing everything they can to ensure the safety of players and coaches leading up to the season. Not only are coaches expected to wear masks, they are enforced at all times under a player’s helmet, too.

“If you would have told me we would be wearing helmets with masks underneath them, I wouldn’t have believed you,” Desert Vista junior running back Devon Grubbs said. “It’s kind of hard because it keeps in the heat. But at the same time, it’s what we have to do.”

Desert Vista had one confirmed positive case of COVID-19 in its program when workouts first began in June. Since then, no other players or coaches have reported an illness.

Addressing his players — who were all spaced out from one another — at the end of the first day in helmets Monday evening, Hinds praised them for their efforts to follow the guidelines from the district

“I don’t think enough adults are telling these kids how proud we are of them,” Hinds said. “It’s just great to see this group of guys living through a pandemic and doing everything they have to do to get to this point. I’m so happy for them we are at this point right now with helmets on our heads the first day.

“We just hope to keep moving forward and things work out.”

Mountain Pointe head football coach Eric Lauer echoed Hinds’ statement, saying he and his team had wished the opportunity to put on pads would come.

“We’re thankful,” Lauer said. “Earlier, it was like putting food on the table but not letting you eat it. Now we get to speed things up but do it in the safest way possible. Putting on the helmets, it made us feel like, ‘man, this season might actually happen.’”

Now, he hopes, they can continue to progress through practices toward their first game on Oct. 2 without additional hiccups or delays.

“It feels nice to be back, it feels great to be in helmets and everything,” Pride junior quarterback Amier Boyd said. “It almost feels like things are kind of going back to normal.”