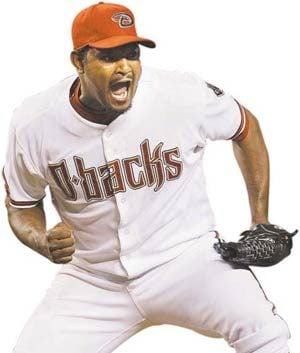 Jose Valverde gets it. Valverde has hit 100 mph on a radar gun, the Holy Grail of the hard-thrower, and still could, if being a pitcher were all about velocity.

Through time, trial, error and a few unwanted trips south on Interstate 10, however, he has come to understand that it is not how fast, but how fine.

Because of that he will join the rest of baseball’s biggest names this evening at the All-Star game in San Francisco.

At this time last year “Papa Grande” was back in Tucson, optioned after losing his closer’s job.

Five miles slower, with a singleness of purpose and a simplified repertoire, Valverde has hit the top of his profession.

Valverde passed Matt Mantei to become the Diamondbacks’ career leader in saves a few weeks ago, and his first All-Star selection seemed a foregone conclusion as the first half wound down.

“Put it this way — we are tops in the league in one-run (victories), and he is the reason,” Tony Clark added.

“He has seized the opportunity. This is his time. A year older, a year wiser. This is a situation where it might have been his last opportunity to win the job, and he’s making the most of it.”

Valverde, 27, is making the franchise single-season saves record seem a minor obstacle over which to hop. Similar to the way he skip-hops over the foul lines when he enters Chase Field from the left field bullpen, or when he leaves the field to return to the dugout after another almost certainly successful — 26 of 29 save conversions — visit.

And the way he hops over the strips of red carpet in the D-Backs’ clubhouse on the way to his locker or to the weight room.

There may be no more outwardly superstitious player in a sport of many idiosyncrasies than Valverde.

Why the carpet leap?

“Maybe later,” said Valverde, a private man, putting off his explanation with a pixie-ish grin.

His pre-appearance ritual is a show unto itself. As he reaches the mound, he throws the game ball toward the D-Backs’ dugout — the ball boys, well aware, run out to take it — and gets a new one from the home plate umpire.

Valverde puts his hand on the dirt portion of the mound, rubs his hand on his right thigh and walks to the back of the mound to say a short prayer. He spits out his chewing gum, slaps his hands together and throws his eight warmup pitches.

He then walks off the left side of the mound, flexes his knees several times, drops his glove and ties his left shoe, then has a short meeting with Hudson before stepping on the mound, once again stopping to put his hand in the dirt.

He is ready to pitch. But that is not all. If he throws two consecutive balls to any batter, he asks for another new ball.

Other parts of Valverde’s game are just as mysterious to hitters, it seems.

Using only a fastball and a split-fingered pitch as an off-speed alternative, Valverde has the second-most saves in the major leagues, trailing only Milwaukee’s Francisco Cordero, who does not live far from Valverde in the Dominican Republic. Opponents are hitting .198 against Valverde.

Valverde retired 15 consecutive batters over six recent outings before his loss to Cincinnati in the 11th inning Sunday, when he was scored upon for only the sixth time in 37 outings this year.

One of Valverde’s failed save conversions came after an outfield error; in the other two, he gave up decisive home runs. Each time he rebounded, running off streaks of nine, 11 and five (and counting) consecutive saves.

“Hosey, you can tell when he’s out there, he has that confidence level,” said Brandon Lyon, Valverde’s teammate since 2004. “He’s more relaxed. He’s calmer. I don’t know if I’d seen that in the past.”

And if you think Valverde has been efficient on the field, get this: Valverde met his wife on Sept. 11, 2001, when he was out for dinner with his relatives and caught her eye. They married the next day.

That is his story, anyway, and he is sticking with it. When she found out he was a baseball player a month later, she was shocked.

“She said she never would have married me if she would have known,” Valverde said. “I said ‘Too bad. It’s too late now.’ ”

Valverde occasionally brings food into the clubhouse cooked by his wife, Luisa, who also has made one of Hudson’s favorite dishes — pork chops, beans and rice — when Hudson’s family is not in town.

Luisa and their young daughter, Monserrat, born in spring training, have made all but one road stop with Valverde this season.

They stayed here for the D-Backs’ season-opening series in Colorado, when Valverde got a save on opening day but failed to convert after giving up two runs, one unearned run, in the second game. He called Luisa the next day and asked her to fly to the next stop, Washington, D.C.

“When I pitch, I want to do my job quickly so I can see my family. You are supposed to have your family around you,” he said. “My daughter changed my life. When I see my baby, I feel so good, so confident.”

“I think last year when he went down and came back, he was a different guy,” catcher Chris Snyder said.

“It lit a fire under him. He wanted to stay, and he proved he can. He’s being aggressive with his stuff more. Hopefully he can keep it rolling. It’s a long season, and we’re going to need a guy like that. That would be huge for us, if he can stay where he’s at.”