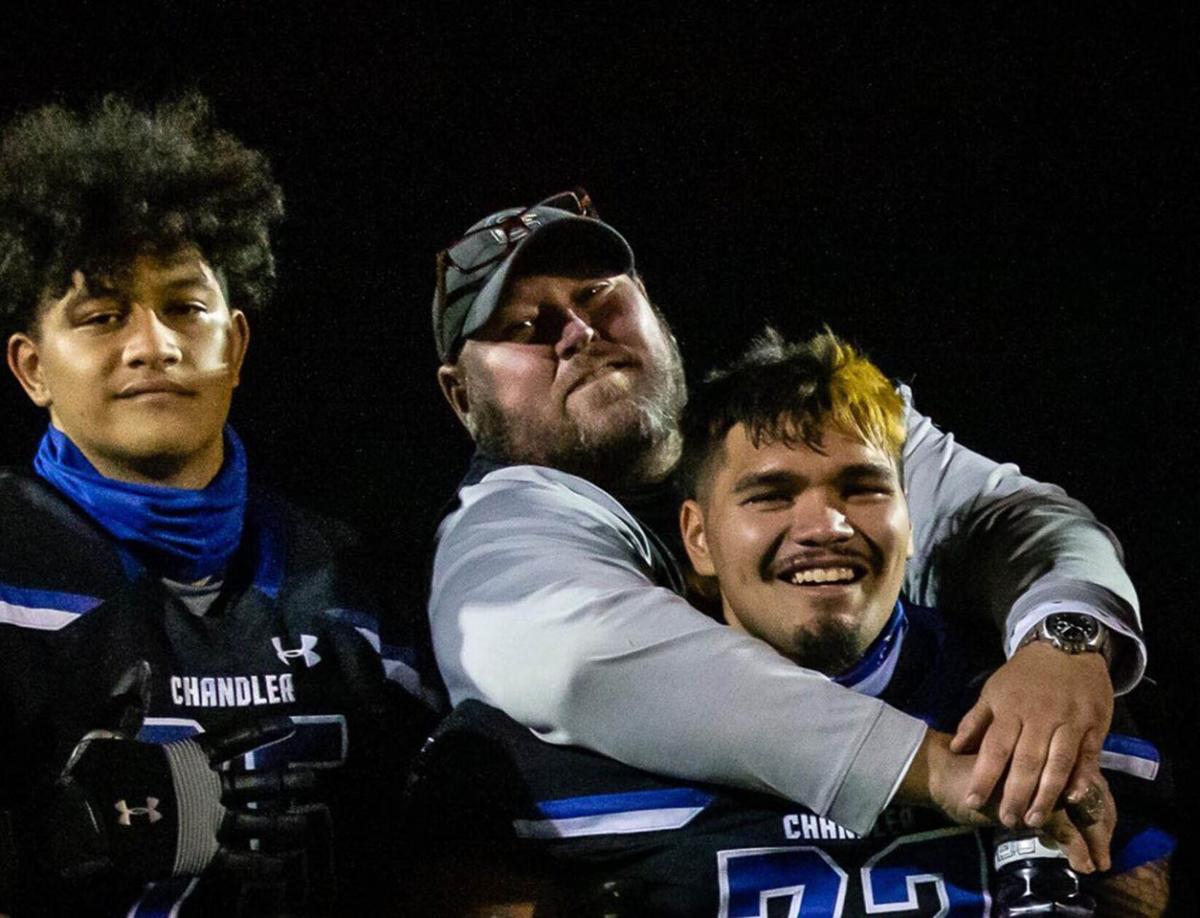 The Chandler Unified School District Governing Board recently voted to rename the Chandler High School weight room after former football assistant Chris Chick, who passed away suddenly in May at 42 years old. 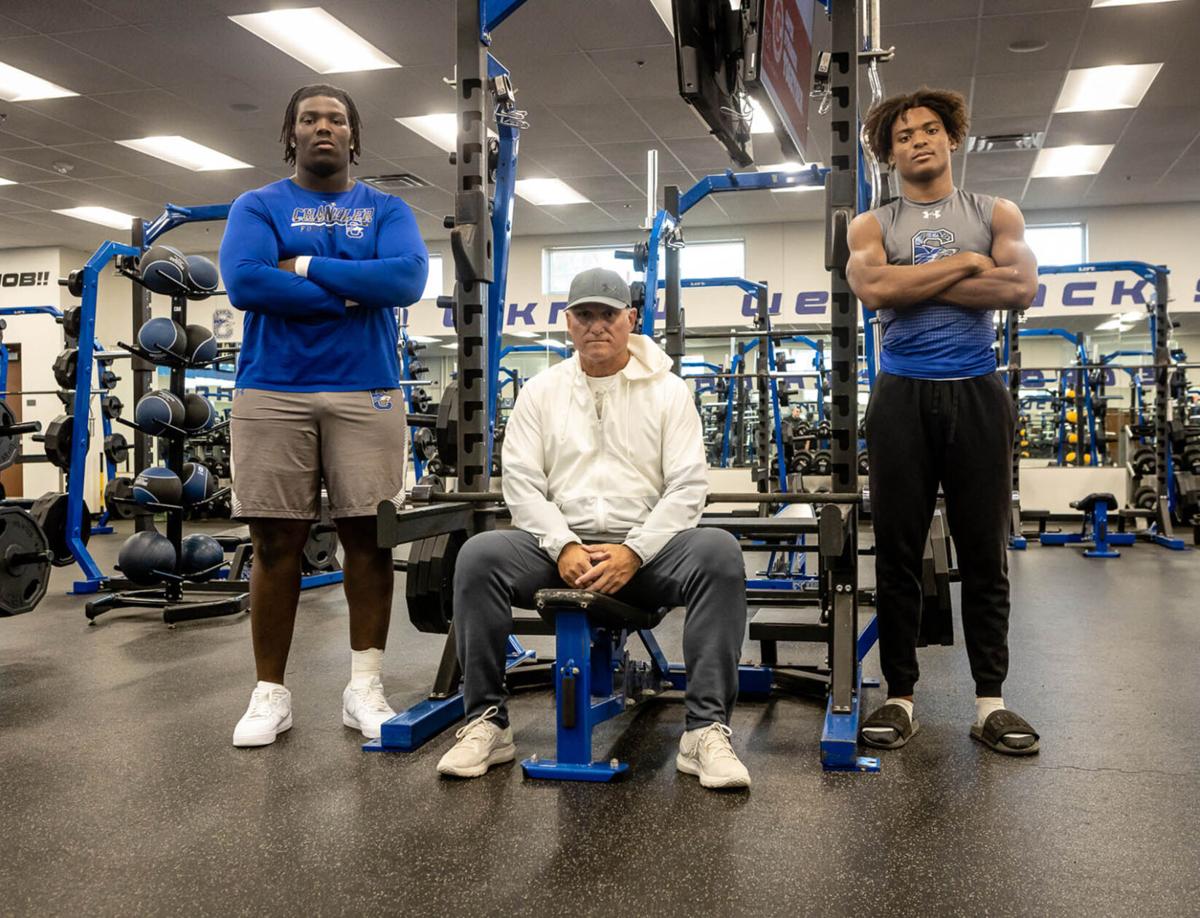 From left: Chandler senior defensive lineman Isaiah Johnson, head coach Rick Garretson and senior safety Devin Dunn said there isn’t a day that goes by where they don’t think of Chick and what he did for them in the weight room and on the field.

He was a friend, a mentor and an overall loving presence on campus. He wasn’t afraid to engage in conversation with anyone. And if you listened, he became even more comfortable with you.

Often, a simple conversation would turn into an hour or longer with Chick. Not only did he enjoy the dialogue — especially when it was about football — but he genuinely enjoyed getting to know people. That, partnered with his football knowledge, is why his unexpected death in May sent shockwaves through the Arizona and Chandler football community.

“It’s still not real,” Chandler coach Rick Garretson said. “There’s not a day that goes by myself or a staff member doesn’t laugh about something with Chris. That was the influence he had on us. We are who we are because of his knowledge.”

Part of Chick’s legacy at Chandler was built in the weight room. He took pride in leading the team’s strength and conditioning efforts and would even help non-football players on campus achieve their weightlifting goals.

It didn’t matter if they played a sport or not, he treated them like one of his own.

To honor that legacy, fellow Chandler football assistant and head track and field coach Eric Richardson drafted a proposal to rename the weight room — which had recently been fully remodeled and built — after Chick. The resolution was brought to the Chandler Unified School District Governing Board at its meeting on Oct. 13. It passed 5-0.

“He deserves it,” Chandler senior strong safety Devin Dunn said. “He really motivated us and pushed us to be great in the weight room. It taught us that nothing in life would ever be easy. I think he taught us a lot of great lessons in this room, off the field and on the field”

Dunn and senior defensive lineman Isaiah Johnson recalled some of their favorite memories with Chick in the weight room. Along with his motivating personality, he also was known to crack jokes.

Often, he would enter the room and start playing his favorite rock music. The players, despite often not knowing who the artist was or the name of the song, would get amped up from the music. If they started jumping around, Chick would join them and at times, head bang.

“The times with his music, yeah, that was fun,” Dunn said. “We had some good times with that.”

Johnson said it still doesn’t seem real Chick is no longer with them. Every day at practice he listens for his infectious laugh or boisterous yell while on the field. But it never comes.

Chick’s impact was felt on all of Chandler’s players, regardless of whether they were directly coached by him or not.

There wasn’t a day that went by Chick wouldn’t gloat about the players he had in the trenches. He was their best friend, but he was also tough on them. But it made them successful.

Johnson, who would routinely go against Chandler’s starting offensive line in practice, recalled on several occasions hearing Chick yell from across the field. Sometimes, he was cheering for something one of his linemen did well. Other times he was scolding a player like most, if not all, football coaches do. But they always responded. They knew he cared about them.

“We would be hitting the bags and hear him yelling and everyone would stop and look,” Johnson said, laughing. “He cared about the game and made sure we knew how important every detail was. He was hard on us but once you talk to him on the side, he was easy to talk to. He’s like a teddy bear.”

This season has been dedicated to Chick. Chandler is currently in the process of chasing its sixth straight state title and is the top-ranked team in the Open Division rankings for the third straight year.

Even with him not physically present, players and coaches know Chick is watching over them. It’s given them an extra level of motivation to continue dominating the way Chick challenged them to do in year’s past.

“(Winning the title) would feel right,” Johnson said, adding what he would say to Chick if he had the opportunity. “I would just say thank you for staying hard on us. He did it because that’s who he is and because he knew it was what he had to do for us to be successful.”

There isn’t a day that goes by that Garretson doesn’t think of Chick. Many referred to him as Garretson’s stepson because of their close bond. They sat together in the press box when Garretson was a coordinator under then-head coach Shaun Aguano. Both and the other coaches made a pact when Aguano left for Arizona State they would remain intact no matter who was picked by school administrators to take over the program.

The Chandler football community has a tight bond. But the bond between coaches on staff may be even stronger.

That’s why when Chick’s name is officially unveiled on the outer walls of the weight room, and his Jersey from his time playing for the University of California, Berkeley is hung up inside alongside the jerseys of former Chandler players who played or are currently playing in the NFL, it will be an emotional moment.

Garretson hopes to honor Chick and invite his family to the Wolves’ final home game this season against Highland on Nov. 5. Details are still being ironed out.

But no matter how the Wolves honor him this season, his name and legacy will live forever inside the walls of the weight room – his paradise.

“Having that cornerstone, having that rock, he was the rock,” Garretson said. “We took off when he took over the strength program.

“Having his name up there, it’s going to be awesome.”