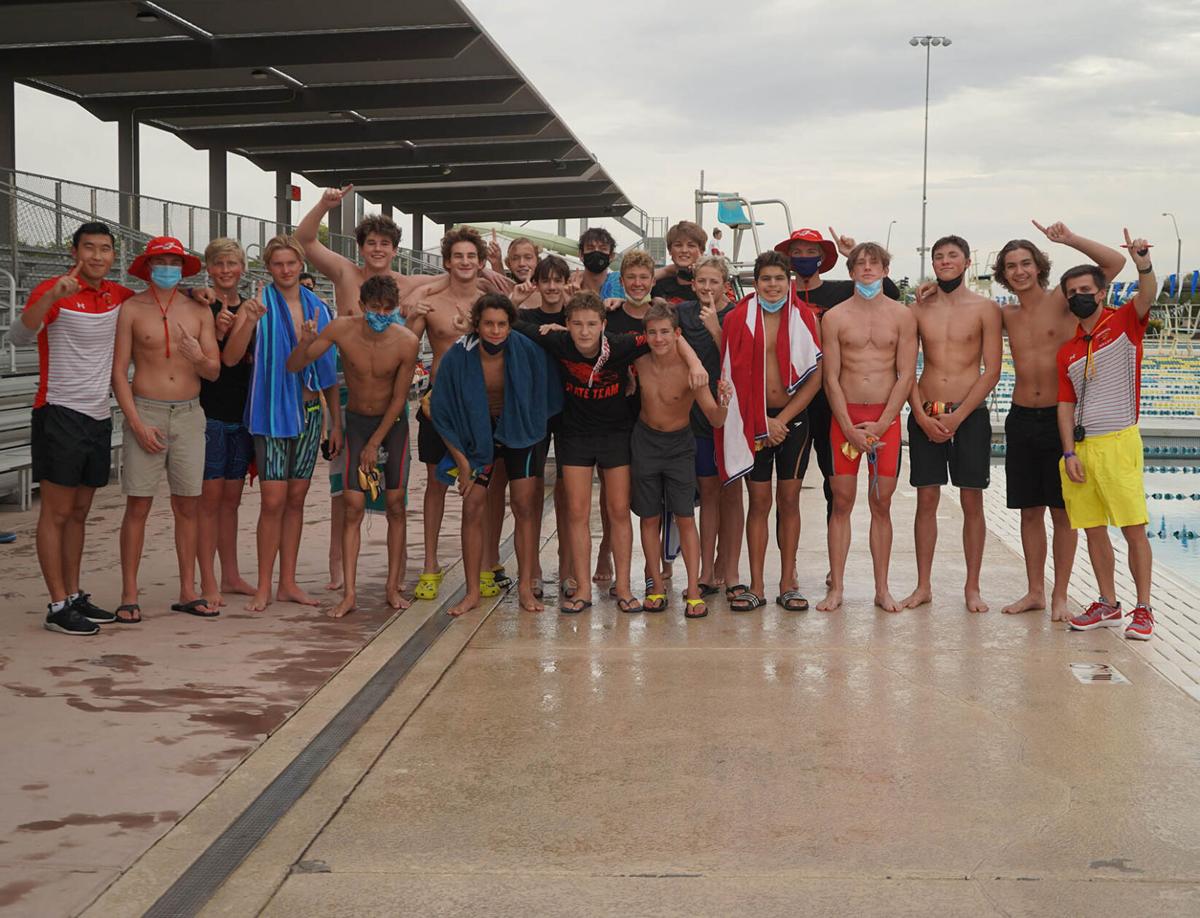 Chaparral’s boys swim team finished strong after a slow start to the 2020 Arizona Interscholastic Association Division I swim championship to claim the title. 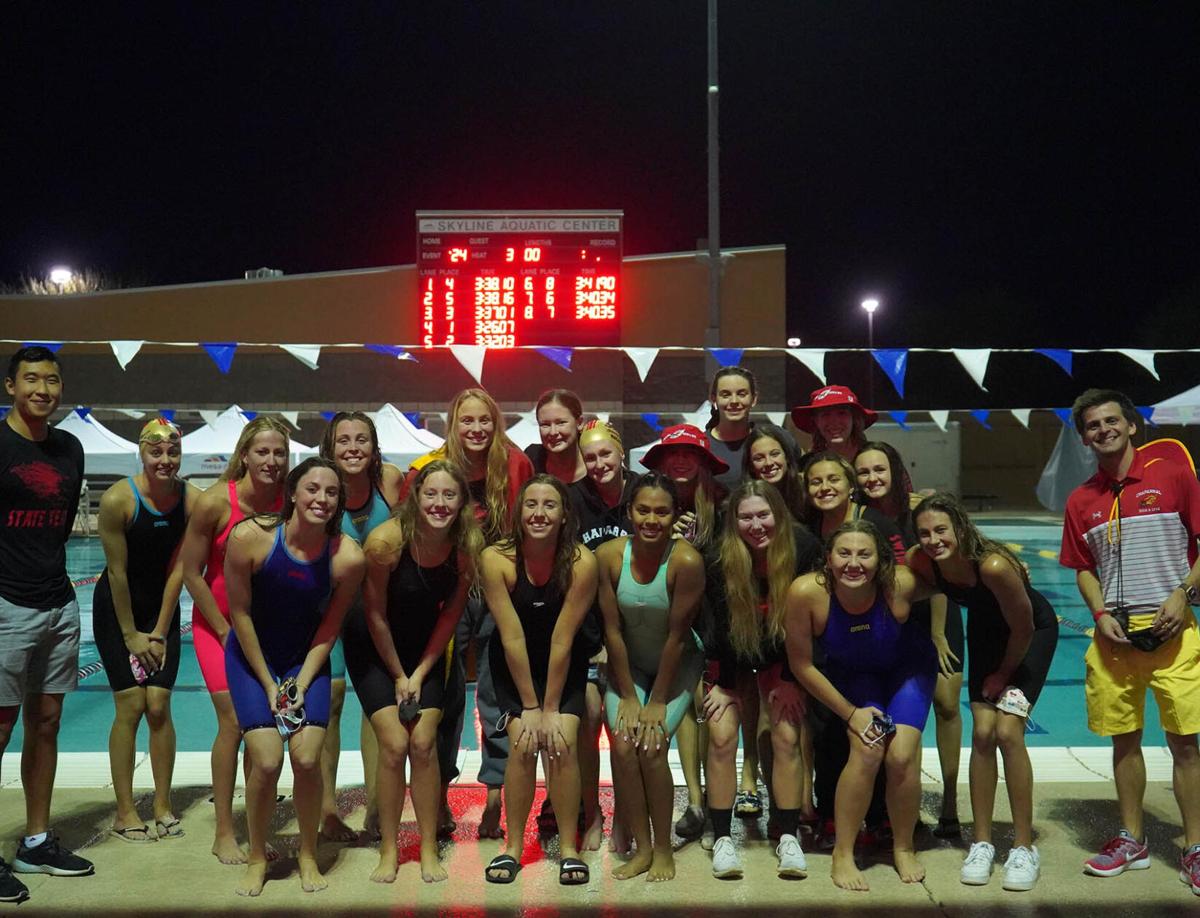 Chaparral’s boys swim team finished strong after a slow start to the 2020 Arizona Interscholastic Association Division I swim championship to claim the title.

A tumultuous 2020 swim and dive season in Arizona has come to a close with Chaparral, one of the state’s most dominant programs, sweeping the Division I boys and girls finals en route to two state titles.

The Firebirds’ boys were the first to capture the championship at the highest division in the state, as they scored 302 total points and held off second-place Desert Vista, which finished the meet with 285 points.

The girls, meanwhile, dominated. Chaparral scored 452.5 points, vastly separating itself from the rest of the field. Xavier College Prep placed second with 267 points.

“The biggest thing is we got them together before the season and the week leading up to state and talked about the opportunities and how it’s an all-team effort,” Chaparral coach Russell Krzyzanowski said. “We explained the importance of making every swim count. For us, the mantra is to just compete. I think we delivered.”

Chaparral started the boys finals in a relatively slow manner in comparison to years past. The 200-yard individual medley relay team, which entered the event with the fastest qualifying time, placed third overall behind Pinnacle and Sunnyslope. In the 200-yard freestyle, a historically strong event for the Firebirds, Chaparral swimmers placed seventh and below.

Braden Walters was able to make up some ground in the 200-yard individual medley with a second-place finish. Reid Brophy placed seventh in the event to secure points for Chaparral.

Krzyzanowski said he felt like the environment may have played a role in his team’s slow start. Due to the ongoing pandemic, the Arizona Interscholastic Association limited attendance to swimmers, coaches and AIA officials. No fans or outside media entities were allowed into the event.

Chaparral seemed to have flipped a switch out of the break. Jasper Brown – who placed fourth overall – Ethan Mindlin, Joel Maldonado and Grey Gartin all scored points in the 100-yard butterfly. The relay team followed that event with a fifth-place finish in the 500-yard freestyle and third-place finish in the 200 freestyle.

Ethan Mindlin’s second-place finish in the 100-yard backstroke was the highest a Chaparral swimmer placed in the meet. Despite no individual champions, the points added up in favor of the Firebirds to win the boys team title.

“No team is ever going to perfect and we definitely weren’t perfect,” Krzyzanowski said. “We got the boys together in the mini break and explained that we needed to regroup. We definitely saw them respond.”

While the boys started slow in the morning session, the Chaparral girls made a statement early on in the afternoon.

The relay team of Greer Pattison, Riley Courtney, Morgan Brophy and Ashley Strouse won gold in the 200-yard medley. Strouse then went on to win the title in the 200-yard freestyle. Samantha Krew, Ava Cunningham and Grace Dunn – all from Chaparral – finished behind Strouse to sweep the medal stand.

Greer Pattison won the 50-yard freestyle, while Brophy won the 100-yard butterfly. Strouse also went on to win the 500-yard freestyle while Cunningham placed third. The relay team also won the 200 and 400 freestyles while the girls placed as high as second in several other events to win the title by a large margin.

The two state championship wins by Chaparral in Division I came with adversity with the team. All year, the school has battled through an outbreak of COVID-19. At one point, more than 200 families at the school had to be quarantined due to possible exposure to the virus.

The football and volleyball programs have had positive cases at different points this year. Members of the swim team were forced to quarantine in the middle of the year due to possible exposure in a classroom. Brophy, which has won the title 32 years in a row, was forced to pull out of the competition just days prior due to an outbreak on the team. Krzyzanowski knows that could have been his team.

“We knew we had to watch ourselves and separate because you never know where it could be,” Krzyzanowski said. “It’s an unpredictable year and that’s what Brophy was faced with. It could have been us in their shoes or any other team.”

Aside from the effects of the pandemic, Chaparral dealt with other adverse situations, including a last-minute coaching change in August.

Richie Krzyzanowski, Russell’s brother, was dismissed by the district after an investigation revealed he had allegedly falsified documents while applying for a principal’s certificate from the state. Richie had previously led the Chaparral girls to six straight state championships before his dismissal. The girls were also named the public high school national champion by the National Interscholastic Swim Coaches Association during the 2018-19 season.

Krzyzanowski was overcome with emotion at the thought of honoring his brother with the state titles. He said Richie was loved by the program and taught him everything he knew to fill his shoes as a successful coach.

“It feels good,” Krzyzanowski said, fighting back tears. “My brother has prepared me for this moment. He’s my best friend. I don’t miss a beat because we’ve gone through it together for five years with me under his wing.

“The reason why I was prepared for this was because of my brother.”