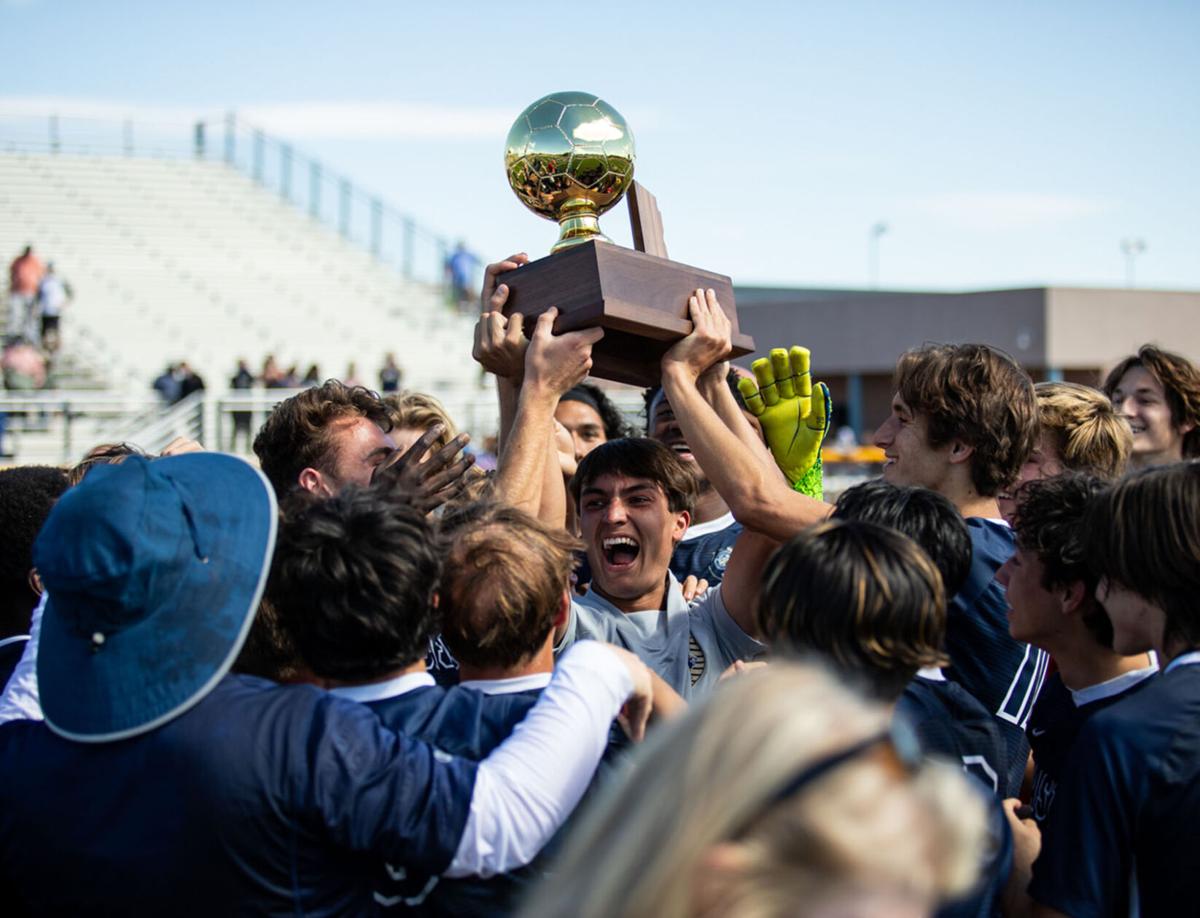 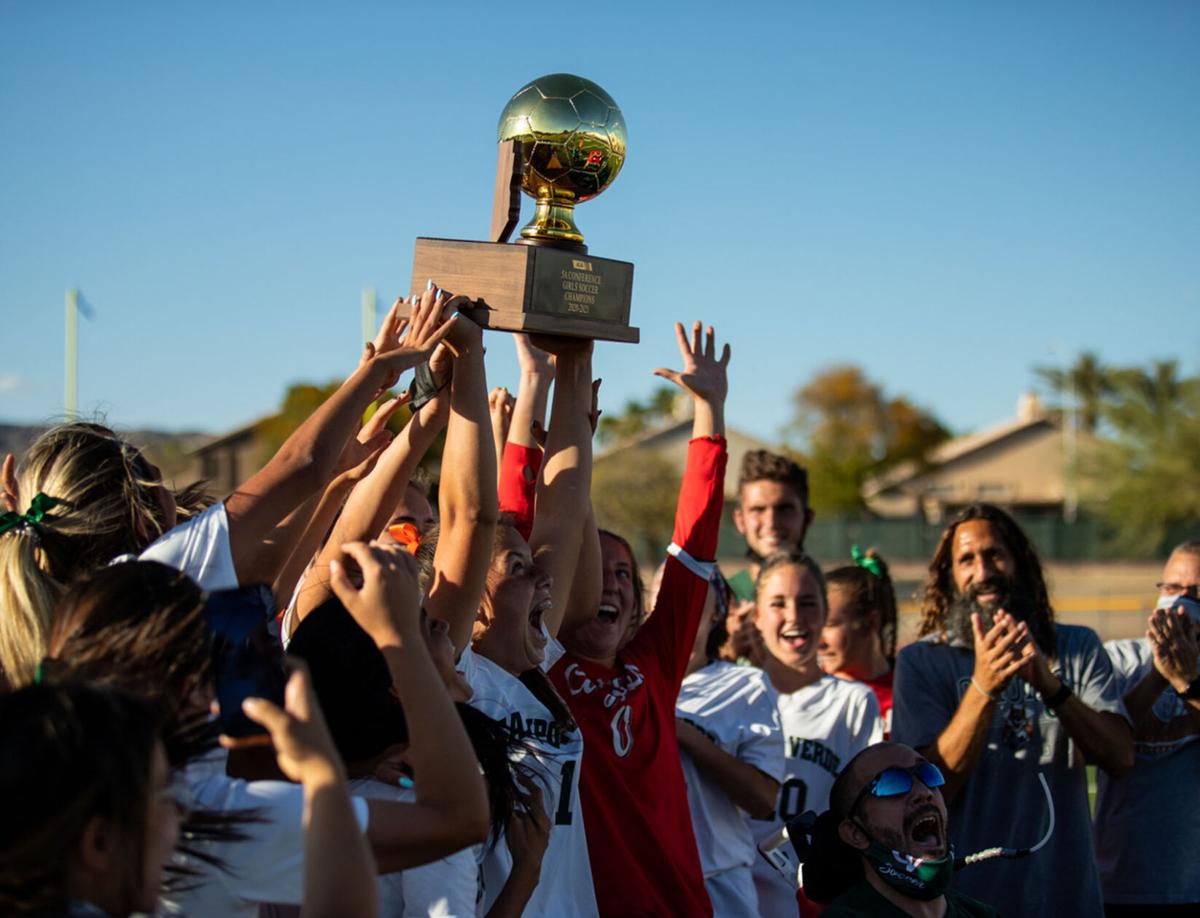 Campo Verde players, led by Graci Brisano, lift the 5A trophy in celebration.

Campo Verde players, led by Graci Brisano, lift the 5A trophy in celebration.

It was goals galore in Ahwatukee as Casteel’s boys soccer team scored eight – including a hat-trick – en route to the 5A title against Ironwood.

As early as nine minutes in, the Colts set the tone. Ethan Calimpong had the ball slipped through to him, and duly delivered with a finish from out right.

“As that through ball was going in, I just knew I was going to beat every single player,” Calimpong said. “I was going to score for the first goal, that I’m going to get this, and I got it.”

Soon, the goals were flying in and Casteel never looked back. Efforts from Jacob Aguayo, Dillon Crowder and Kaden Cameron sent the top seed in up by four at the break.

“I don’t think it could have started any better,” Casteel coach Greg Lanman said. We had a few basic things in our game plan that we noticed what we can do, because they’re a team that gets tucked in. If we can go easy, one-two touch passing, switch point of attack, get the ball down to the endline, have a little cross, someone on the back post. We scored several times that way.

Despite their advantage, there was no desire in the Colts camp to let up.

“We came in and we told the boys at halftime that it’s not even close to being over,” Lanman said.

While Ironwood would find two goals in the second half through Adrian Sanchez and Omar Luna, their defense continued to be leaky enough to extinguish any hope. Danny Ramos and Ryan Sainz both found the net for Casteel as their side advanced the score.

“I had a few chances,” Ryan Sainz said. “It was very close, and I was just thinking that I needed to get that goal.”

The Colts’ real star, though, was Calimpong. With the seventh and eighth goals of the match, he sealed his hat-trick.

“It is a really big deal, especially in the state championships” Calimpong said.” It feels incredible.”

For the Colts’ coach, the victory ultimately comes down to two things: talent, and persistence.

I’m blessed with having all these great players,” Lanman said. “They have the technical and tactical and then you saw what type of work rate this team has. They work their butts off, and they deserve to be state champs.”

When it comes to a state championship match, sometimes you just need a little bit of luck to capture the crown.

In the 5A girls’ soccer title match, Campo Verde found that out as they edged a 2-1 victory over Casteel.

“The ball bounced our way more often than it did for them,” Coyotes coach Andrew Guarneri said. “Our goalkeeper made tremendous saves.

“That game could have gone either way. It could have been 3-3. Both teams had chances, goalkeepers did a good job on both ends, some kids missed some that they probably should have put away, and we managed to find the back of the net more than they did.”

Campo Verde had taken an early lead through a curling Amber Thompson effort within seven minutes. Yet Casteel worked their way back into the game, and eventually found favor as Morgan Fiedler broke away of the pack on a free kick to level the score.

From there, it was neck-and-neck. Either side could have broken the deadlock, with Thompson continuing to threaten the Casteel goal and Morgan Lewis’ top corner-bound strike tipped away by Coyotes keeper Kayla Caballero.

It definitely wasn’t a match for the faint of heart in either net.

“The one, the cross came in and it hit my face, but whatever works when you have to save it,” Caballero said.

With ten minutes to go, the sides remained deadlocked and the threat of overtime loomed under the afternoon sun.

“We were prepared for all that,” Guarneri said. “We knew who our penalty kickers were going to be if we got to that stage. We were a little deeper than they were, so I felt comfortable if we went to overtime.”

As the clock counted down to just six minutes left, the fear of a lengthy conclusion soon disappeared.

“I was on the side, and no-one was really marking me,” Mallory Miller said. “My teammate Graci Briseno passed me the ball when I was wide open, so I just took the shot and it went in.”

With a state championship on the line, what was going through the sophomore’s head at that point?

A tense ending ensued, with Casteel pushing everything forward in search of an equalizer. With just moments left in the match, Jenna Custer was standing over a Casteel free kick within shooting range.

“At the beginning of the season, my coach said: ‘don’t set up the wall until the ref says wait for the whistle.’” Caballero said. “So, I just waited in the goal, and I saw she was going to kick it so I was just ready for it.”

Her effort fizzed off the crossbar, and a waiting Renee Sainz, pressured by Caballero, was unable to keep her follow-up attempt on target.

With no time left for another attack, that sealed the Coyotes victory. A bench that had vocally supported its side throughout the match rushed the field in joy.

“We all just had amazing energy,” Miller said. “We all were just so connected with each other, and we all were cheering everyone on. We were all just lifting each other up through everything.”

It wasn’t just a state title that was worth celebrating then either.

“We’ve had a rivalry with Casteel now since they joined 5A,” Caballero said. “It’s just an amazing feeling to finally get the win against them.”