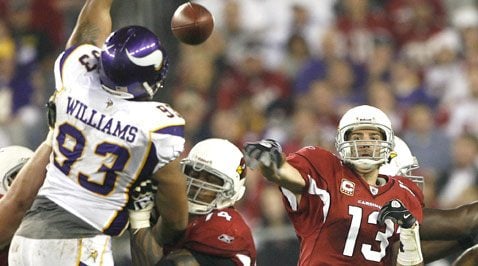 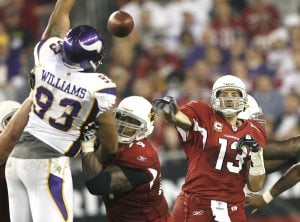 Scott Bordow: The perfect Sunday for the Arizona Cardinals ended at 9:35 p.m.That’s when quarterback Kurt Warner took a knee and the Cardinals began to celebrate their 30-17 victory over the Minnesota Vikings before a sellout crowd, a national television audience and, let’s be honest, skeptics everywhere.

The perfect Sunday for the Arizona Cardinals ended at 9:35 p.m.

That’s when quarterback Kurt Warner took a knee – is there a sweeter phrase in football? – and the Cardinals began to celebrate their 30-17 victory over the Minnesota Vikings before a sellout crowd, a national television audience and, let’s be honest, skeptics everywhere.

Raise your hand if you thought the Cardinals would dominate a Vikings team that was 10-1, had won four straight and arguably was the best team in the NFC, if not the NFL.

But there are Sundays when Arizona makes you dream all over again, and this was one of them.

The day couldn’t have gone better.

In the morning, word emerged that Warner would play unless symptoms of his concussion flared up before game.

The Cardinals then received an unexpected gift about 75 minutes prior to kickoff when the Seattle Seahawks beat San Francisco on a last-second field goal. That eliminated the possibility of the 49ers creeping within one game in the NFC West heading into their Dec. 14 Monday night game in the Bay Area.

Finally, Arizona played its best game of the season, dismantling the Vikings and making Brett Favre look like an old man instead of a MVP candidate.

It was the football equivalent of nailing the Sunday New York Times crossword puzzle on the first try – in ink.

“It says a lot about our football team and how far we’ve come,” coach Ken Whisenhunt said.

The two quarterbacks were the featured attractions coming into the game, but Warner deservedly received the glare of NBC’s bright lights throughout the contest.

Simply put, he was brilliant.

Showing no ill-effects from the concussion he suffered against St. Louis two weeks ago, he carved up the Vikings, completing 22 of 32 passes for 285 yards and three touchdowns.

It wasn’t until Friday – after meeting with a neurologist – that Warner was certain he would play. Even then, he had to make sure during the pre-game warm-ups that he was symptom-free.

But if he was worried about taking a hit and rattling his brain, he sure put on a good act. Early in the second quarter, with Vikings safety Madieu Williams coming straight at him, unblocked, he hung in the pocket and took a vicious hit so he could deliver a 19-yard strike to Anquan Boldin.

Right then you knew Warner was OK and the Vikings were in trouble.

“I don’t think Kurt gets enough credit for his toughness,” Fitzgerald said. “The guy is just a fierce competitor.”

It took longer than normal for Warner to make his way to the interview room, but only because he was getting treatment for a shot he took to his hip. He said his head felt fine and that he wasn’t experiencing any “symptoms or issues whatsoever.”

For that, he had his offensive line to thank. The Vikings, who led the league with 40 sacks, didn’t get to Warner once, and defensive end Jared Allen spent most of the night getting turned every which way by backup tackle Jeremy Bridges. Allen not only failed to sack Warner; he didn’t make a tackle.

“When our line protects (Kurt) like that, and our receivers make those plays, he’s a hard man to stop,” Whisenhunt said.

The win all but sewed up the NFC West – Arizona has a three-game lead over San Francisco with four games left – so the focus turns to the bigger picture.

Did the Cardinals establish themselves as one of the NFC’s elite teams, or was the inspired performance just misdirection?

Remember, we’ve been here before with this team, including earlier this year when it followed its road win against the New York Giants with a stinker against Carolina.

“Any time you can beat one of the best teams in the league it gives you confidence moving forward that you can play with the big dogs,” Warner said. “But we’ve had these games for the last couple of years. The key for us will be to stack them.”

That will be a lot easier as long as Warner is chucking the football around. He reminded us again Sunday how valuable he is to the organization.

But if he’s healthy and he has time to throw, anything seems possible.