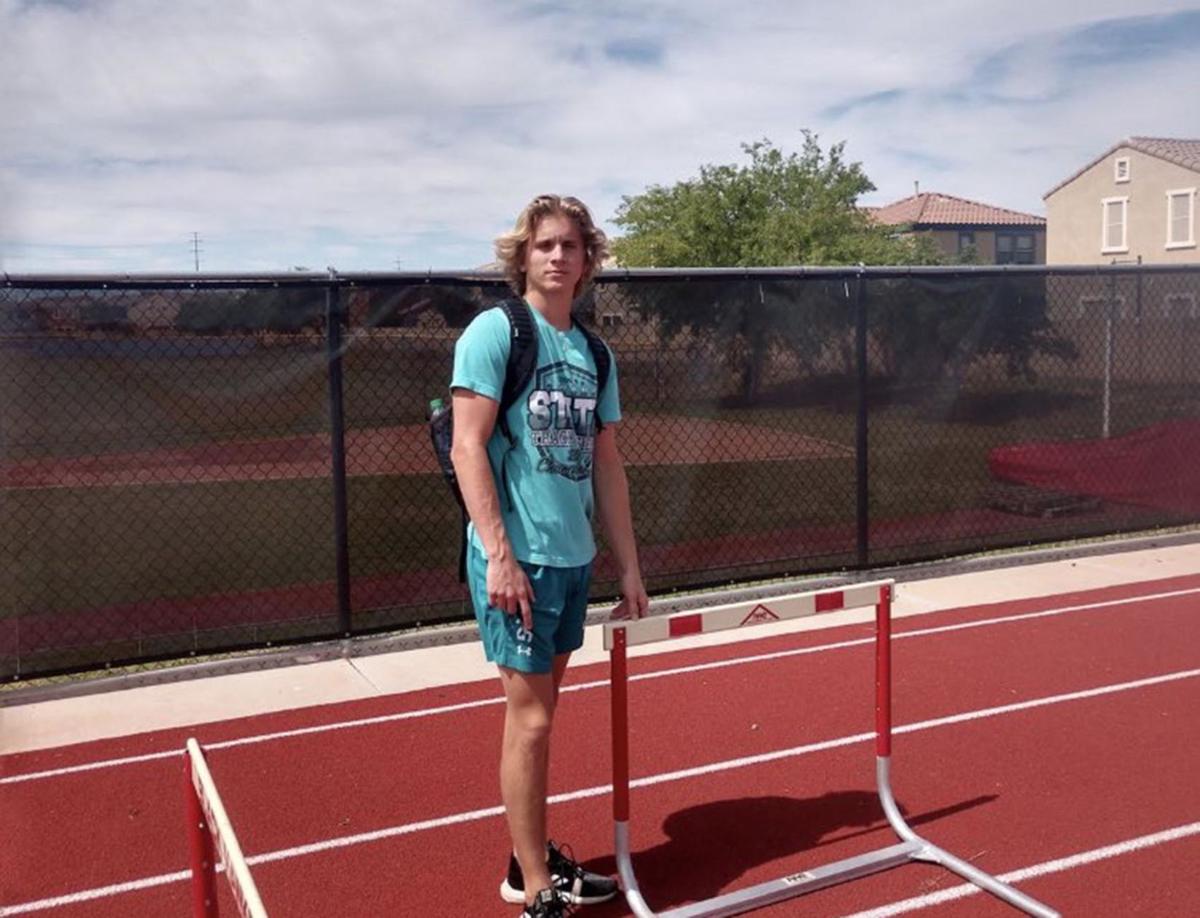 Highland senior Zach Schroeder had planned to make a statement this spring on the track, but that opportunity was cut short due to the cancellation of all sports. 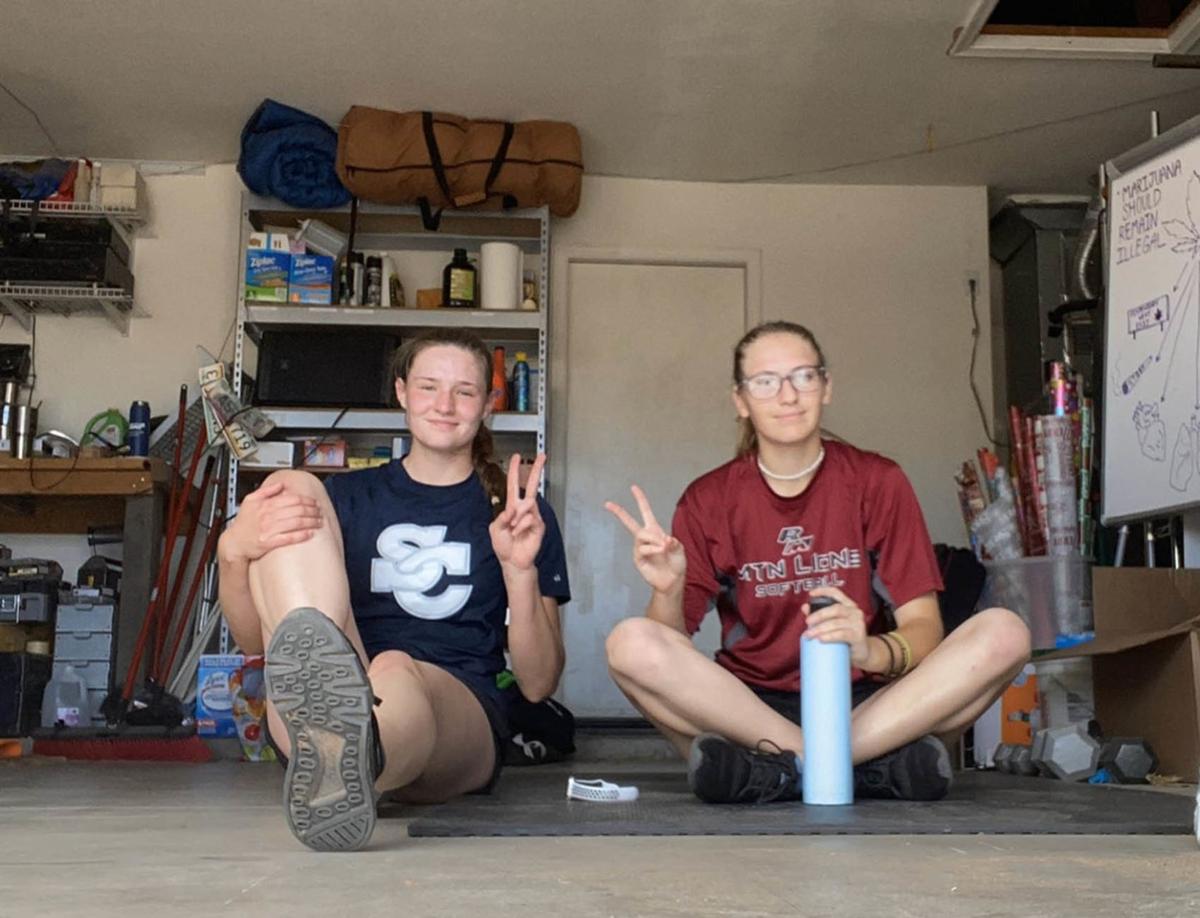 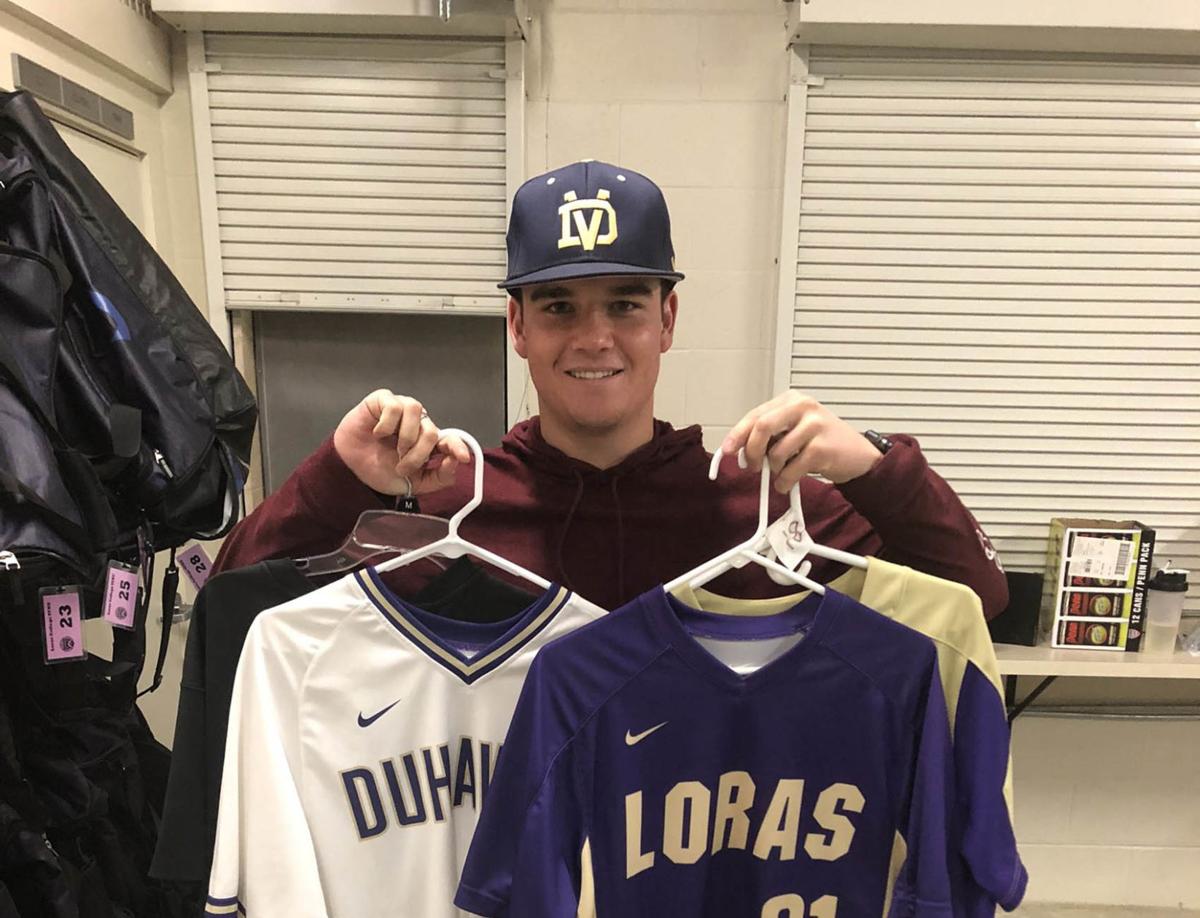 Desert Vista senior JD Mettham found a silver lining in the cancellation of the spring sports season as he committed to continue his baseball career at Loras College in Iowa. 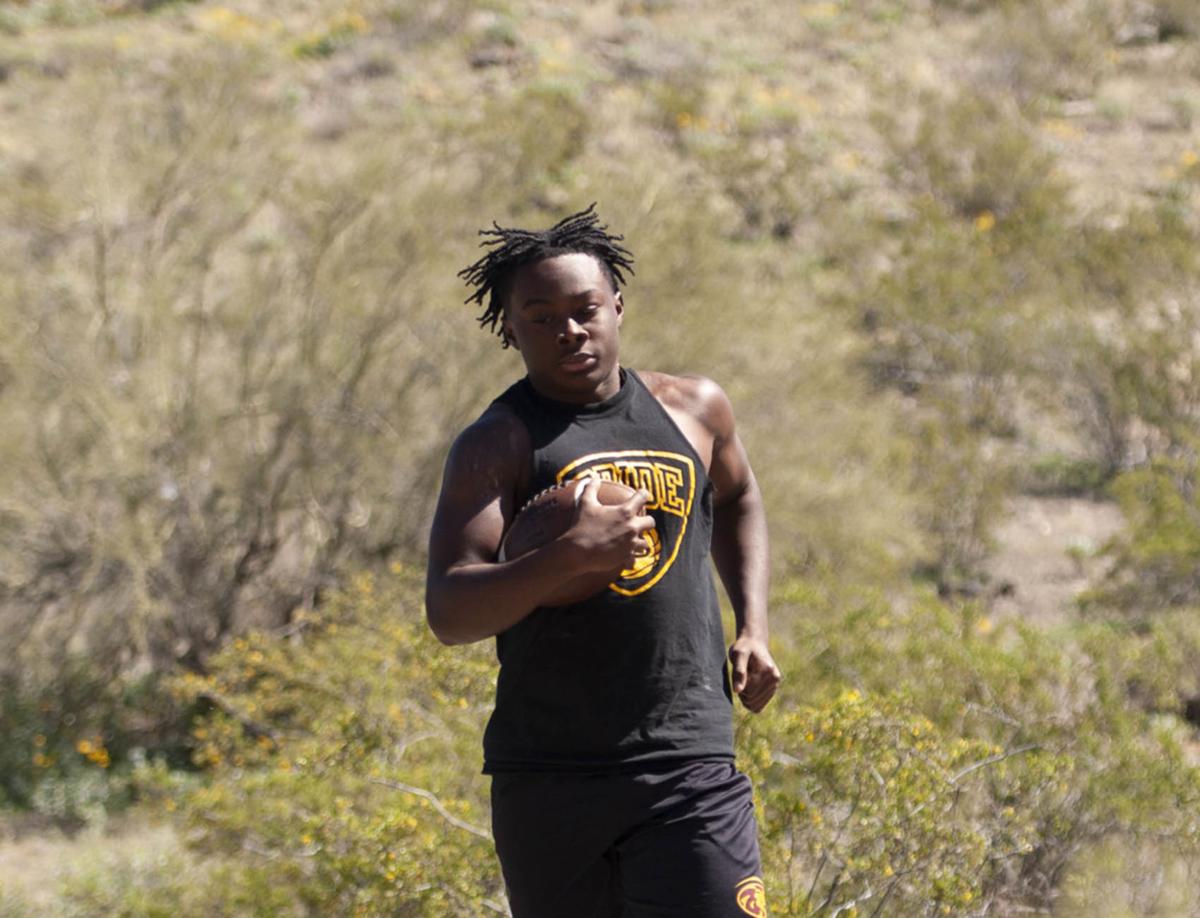 Mountain Pointe freshman Robert Moore III is doing what he can to stay active for football season, running mountains and working out at home with homemade barbells. 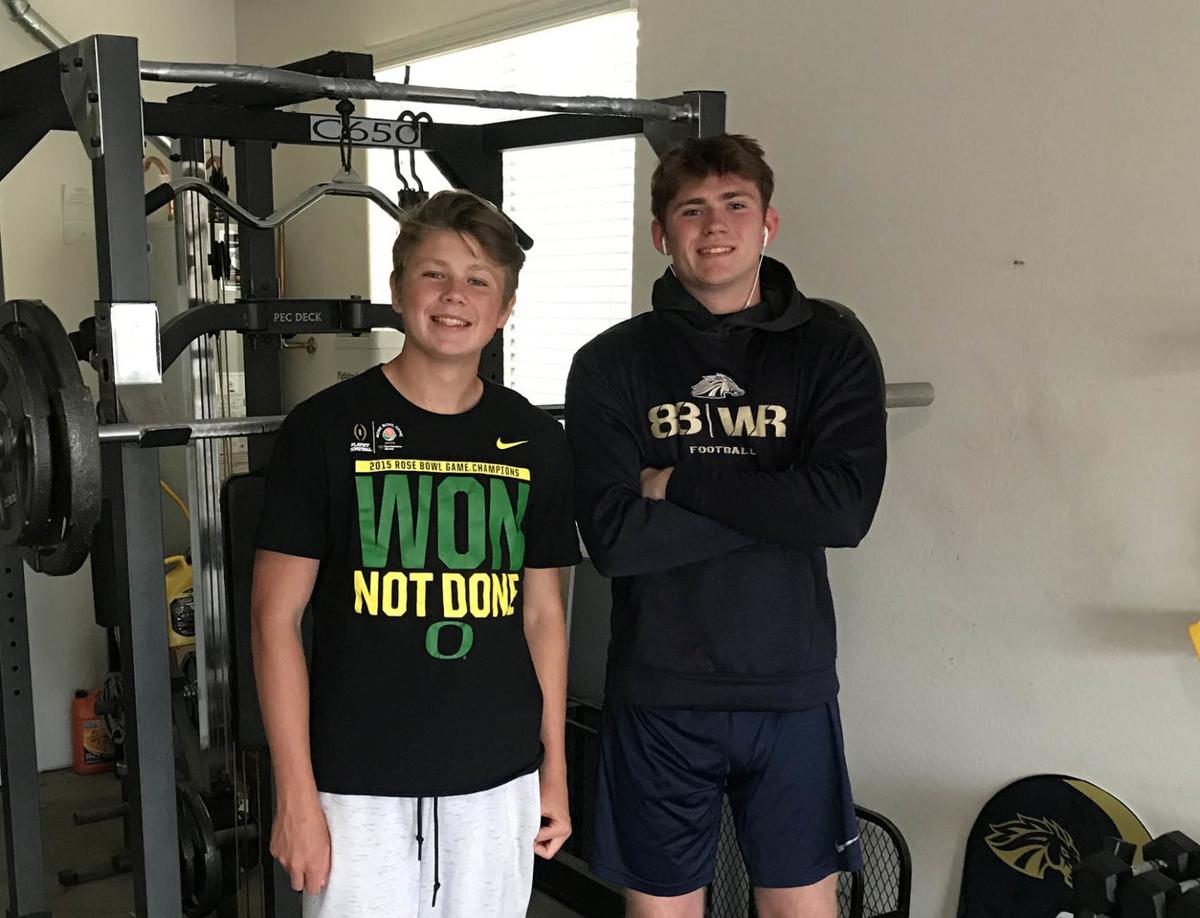 Casteel junior Gavin Jury (right) has spent his time away from volleyball this spring focusing on a return to football after a season-ending injury his sophomore year. He often works out at a field or in his garage with his little brother Landon Jury, who is a freshman quarterback for the Colts.

Highland senior Zach Schroeder had planned to make a statement this spring on the track, but that opportunity was cut short due to the cancellation of all sports.

Desert Vista senior JD Mettham found a silver lining in the cancellation of the spring sports season as he committed to continue his baseball career at Loras College in Iowa.

Mountain Pointe freshman Robert Moore III is doing what he can to stay active for football season, running mountains and working out at home with homemade barbells.

Casteel junior Gavin Jury (right) has spent his time away from volleyball this spring focusing on a return to football after a season-ending injury his sophomore year. He often works out at a field or in his garage with his little brother Landon Jury, who is a freshman quarterback for the Colts.

The spring track season was supposed to be special for Highland senior Zach Schroeder.

He had already shown his speed and skill on the football field, leading the Hawks with 33 receptions for 599 yards and six touchdowns. As one of the top hurdlers in the state, he was banking on a strong showing this spring to potentially continue his career at the next level.

But on March 30, when the Arizona Interscholastic Association announced it had canceled all spring sports activities due to the shutdown of schools from coronavirus, his high school track career came to an abrupt end.

“It’s very stressful,” Schroeder said. “I had colleges looking at me. I’m just trying to stay in track shape as much as I can right now.”

Schroeder shares the same sentiments as other seniors across the East Valley who saw their final seasons come to an end.

The likelihood of the season being canceled began to dawn on Schroeder shortly after sports were suspended on March 16. Even then, however, he found outlets to stay active.

“I’ve been doing more power stuff,” Schroeder said. “I’ve really been trying to get my endurance up. Just doing anything I can.”

For a short time, Schroeder managed to find open tracks to set up hurdles and conduct workout sent to him by Highland’s coaching staff. But as more schools locked their gates, he realized he had to be creative.

Using extra materials laying around his house, he made a handful of hurdles to set up in a park near his house. It’s an unconventional way for him to stay active should an opportunity present itself for him to continue playing either football or competing in track at the next level.

“It’s all about staying positive,” Schroeder said. “All I can do is continue training and see what happens.”

Makayla Donahoo has also found ways to be creative in the absence of the spring season. The Red Mountain senior softball player routinely works out, juggling online schoolwork at the same time.

If she isn’t at a park fielding ground balls or taking batting practice in the cage in her backyard, her and Mountain Pointe senior Theresa Wilsterman are running and doing other exercises.

“My college sent me monthly workouts to help stay in shape,” Donahoo said. “It’s a lot of body weight stuff and running. We usually try to meet up Mondays, Wednesdays and Fridays. If we can’t meet up in person then we Facetime on the phone.

“She keeps me motivated.”

The two are best friends and play on the same club softball team, so training together has become a ritual. But even then, she still can’t help but miss her teammates at Red Mountain.

“It’s just weird not seeing them when I used to see them every day,” Donahoo said. “I think this whole situation shows them they have to expect the unexpected and things can always change. That’s why it’s important to always play your hardest always because you never know what could happen.”

For athletes like Donahoo who have already signed to continue their academic and athletic careers in college, the cancellation of the spring sports season allows them time for extra training.

Desert Vista senior Tyson Grubbs has used his time away from track and field to shift his focus back to football, where he will play for Northern Arizona University in the fall.

Grubbs gave himself a break when the track season was initially postponed two weeks. But as it became clear the season would likely not continue, he’s gotten back into it and when schedules align, has worked out with his sister, younger brother, Devon, and fellow senior Colton Grover.

“We felt our bodies kind of getting out of shape, so we got going again,” Grubbs said. “We started going on hikes or working out at a field. We will sometimes go to Colton’s because he has a gym setup in the garage.”

“We are trying to put a gym together at our house, too. It’s not a lot but it’ll work for now. We just try to do anything we can.”

Fellow senior JD Mettham found a silver lining in the cancellation of the spring sports season, as he announced his commitment to Loras College to continue his baseball career.

“The coaches and the team have been very welcoming to me,” Mettham said. “I wasn’t ready for my baseball career to end.”

Mettham played just eight games as a junior catcher for the Thunder, recording 18 put outs in limited action. In seven games this season before it was canceled, he recorded 30. Since the season was canceled, Mettham has spent his time working out on his own to prepare for college ball.

He has set up his own gym at his home, working out there at least once a day. He also heads to a local park, where he and a couple of his friends will meet to hit and do field work in order to stay loose. But still, the thought of losing his senior season weighs heavy on him at times.

“When I first realized my senior season was taken away, I was upset especially since our previous game did not go how we wanted it to and our game scheduled 2 days later was canceled due to rain,” Mettham said.

While seniors are using the spring cancellations to prepare for the next level, younger players are doing so to prepare for breakout seasons in high school.

Robert Moore III wakes up every morning and completes online schoolwork to maintain his 4.0 GPA. He then heads outside for workouts, where he has become creative.

“It was difficult at first to find workouts, but I just thought of different things and looked up stuff on Twitter,” Moore said. “Usually I’ll eat, do some schoolwork then start a workout in the afternoon.”

The Mountain Pointe freshman plays baseball, football and basketball for the Pride, transferring from Chandler in January. He rotates his workouts through the week. If he isn’t taking batting practice, he is running at a local. His father even made a homemade barbell for him to lift weights while gyms are closed. If that isn’t an option, he can strap himself into a harness and pull the family’s Ram pickup truck behind a local shopping center.

“It helps a lot,” Moore said. “My favorite place to run mountains is at Sunray Park. I also have a VertiMax trainer that also helps. I do a little bit of everything.”

This spring was supposed to be a comeback tour for Casteel junior Gavin Jury. The 6-foot-4, 205-pounder suffered a season-ending injury to his hand as a sophomore playing football. It led to him being diagnosed with Kienbock’s disease, where blood flow to the lunate bone in his hand is interrupted.

He was told he may never be able to play football or volleyball again, but his condition improved, and he was cleared to play on Feb. 12.

“I was really happy, I had the biggest smile on my face,” Jury said. “When my parents said I was cleared to lift and get back into sports again, I realized I was able to do something I love.”

His volleyball season was cut short, but that hasn’t deterred him from preparing for the fall. He anticipates putting up big numbers for Casteel as a senior. He’s been working out on the field with his freshman brother, Landon Jury, a quarterback for Casteel. He’s also worked out on the field and in the garage with Tyler and Brady Shough, his cousins. Tyler will likely become the starting quarterback at Oregon next season while Brady enters his senior year at Hamilton.

He’s doing everything he can to prepare for the upcoming season in hopes of earning a scholarship offer to continue his athletic career in college.

Even as the spring sports season has been taken away, he remains positive for the future.

“I’ve really used this time to focus on football,” Jury said. “I’m excited to get back into it.”