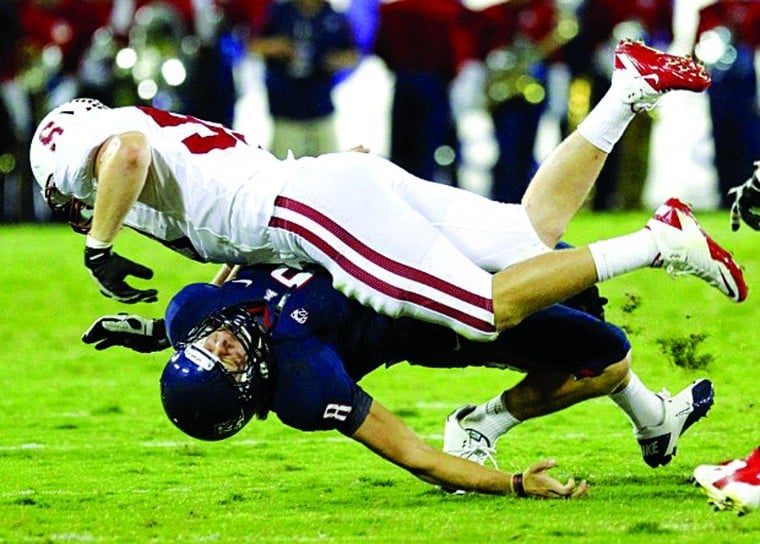 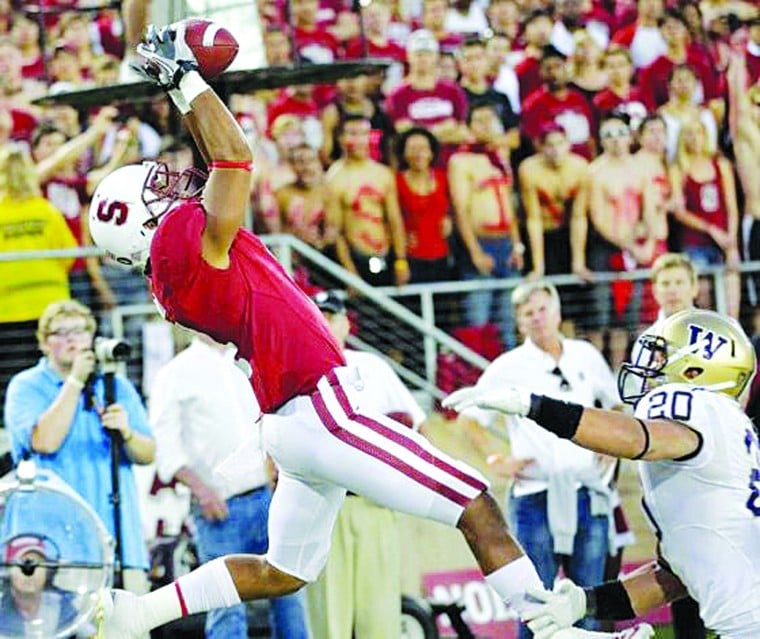 Stanford receiver Drew Terrell leaps to make a touchdown catch during a Cardinal win over Washington on October 22. Terrell was an All-Pac-12 honorable mention pick as a punt returner.

Stanford receiver Drew Terrell leaps to make a touchdown catch during a Cardinal win over Washington on October 22. Terrell was an All-Pac-12 honorable mention pick as a punt returner.

Drew Terrell and Trent Murphy have lobbed barbs at each other for years while discussing postseason football in Arizona.

Maybe the Fiesta Bowl is enough incentive for an uneasy alliance.

The former high school rivals have teamed up at Stanford and could play key roles in the fourth-ranked Cardinal's matchup with No. 3 Oklahoma State on Monday at University of Phoenix Stadium. Murphy has 39 tackles, nine tackles for loss and 5 1/2 sacks this season at outside linebacker, while Terrell was an honorable mention All-Pac-12 punt returner with an average of 11.9 yards per return.

But get them talking about the days of Hamilton (Terrell) vs. Brophy (Murphy), and they can't help themselves.

"That was some crosstown beef," said Terrell, who played defensive back and wide receiver for the Huskies in high school.

When both were juniors in 2007, Hamilton was the 5A Division I title favorite, but was upset by Brophy in the semifinals. The game was played in a steady rain, which Terrell naturally uses as an excuse.

"I come up with all kinds of stuff," Terrell said. "Our team speed, we couldn't use it because it was all wet and soggy. That field played to their advantage. I pull out all the stops."

"They went in and changed their uniforms at halftime because they were all wet," said Murphy, who played defensive end for Brophy. "I always tease him, saying that they were pretty boys. He denies those claims at all costs."

Terrell evened up the score in 2008 when Hamilton beat Brophy in the 5A-I title game, and he's been quick to remind Murphy about the location of that game.

"The last time we came to this stadium, my team got the best of his team," Terrell said. "That's the last memory I have of here."

Said Murphy: "I'd like to make excuses for that one, but it's hard to find a good one."

Terrell laughs at how seriously he used to take the rivalry, noting that he wouldn't really talk to Murphy in high school even though he knew they would one day be teammates.

But both were drawn to the Cardinal by the enthusiasm of then-coach Jim Harbaugh, who took the program to new heights before leaving last offseason to take over the San Francisco 49ers.

When Terrell and Murphy signed, Stanford was coming off 4-8 and 5-7 seasons. College coaches can be notorious for speaking negatively of opposing schools to prospective recruits, but the Cardinal were met with indifference.

"At the beginning, no one thought of Stanford as someone that would steal their recruits away," Terrell said.

Both Terrell and Murphy considered Arizona State before settling on Stanford, and the decision has paid off.

Last season, the team made the Orange Bowl.

This year, behind quarterback Andrew Luck - the expected No. 1 pick in the upcoming NFL draft - Stanford was in the BCS national title conversation before tripping up against Oregon. It is the team's lone blemish, and although the loss torpedoed the team's Rose Bowl chances, the Fiesta Bowl was a solid consolation prize.

Murphy has played at University of Phoenix Stadium three times in his career, winning the title over Desert Vista as a junior and beating Las Vegas Bishop Gorman to begin his senior year before the title loss to Hamilton.

He said he can't wait to play in front of family and friends, although this appearance will be a little more complicated than the high school games.

"The biggest struggle has just been finding enough tickets," Murphy said. "But I've been in Arizona my whole life, and everything I know is here, so it's pretty exciting."

Murphy has started all 12 games for Stanford and will be one of several players intent on slowing down a prolific Oklahoma State attack. Terrell spends his time at wide receiver and returning punts, and if this game is as high-scoring as some expect, he could be in line to have an impact.

And if either Terrell or Murphy makes a big play, the other will be on the sidelines cheering them on.

It's something their 17-year-old selves would have looked at with disgust.

"Back in the day we thought it was so serious, that the rivalry was so sincere," Terrell said. "We knew we were both going to Stanford and we'd be teammates one day, but at the time our programs didn't like each other too much. We were so focused on those games.

"Now we just laugh about it."

Where: University of Phoenix Stadium