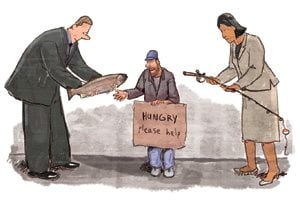 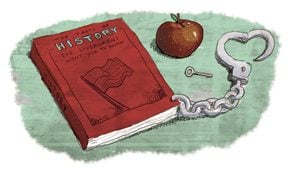 Our company’s founder, and the descendants who continue to lead Freedom Communications Inc., come at the world with an idea: to advance human liberty.

How would R.C., whose birthday we marked on Saturday, grapple with today’s seemingly intractable problems? In the essays below, the opinion staff of the Orange County Register, our sister paper, makes proposals with little or no consideration for political feasibility. The writers suggest policy goals consistent with concern for personal liberty as the ultimate political good. We believe that “freedom works” because it is the natural state of human beings. Social arrangements that corrupt this state, that force individuals to behave against their own best instincts, cannot work in the long run.

We acknowledge that Utopia is not an option in an imperfect world filled with imperfect people, a world of trade-offs, where every policy has costs as well as benefits. Nonetheless, to think boldly about freedom in human affairs is not just a talking point or discussion-starter to us (although it serves that purpose as well). In the end, even small steps toward freedom are worth working toward, because human beings are meant to be free and because … freedom works.

The most effective way to neutralize terrorism against the United States is to pull the military back from all its overseas outposts and institute a foreign policy of nonintervention abroad and defense strength at home. Terrorists may “hate us for our freedom,” but they are able to recruit people to attack us because we are in “their” countries, trying to run them. Most Americans don’t have the desire, knowledge or patience to run a global empire, and doing so produces more resentment than appreciation. We don’t need military forces in oil-producing countries; they need to sell oil more than we need to buy it, and they will, whether they like us or not.

It would take a while for the world to believe we are sincere in such a policy, and even then people will have grievances, real or imagined, so this policy wouldn’t mean nobody would seek to do us harm. So small-scale, special forces-type actions against whatever active terrorist cells remain after instituting such a policy might be necessary. We should have learned by now that large-scale military action is more likely to provoke terrorism than to wipe it out.

Effective anti-terrorist policies, as the British learned in Northern Ireland, will look more like police work than battle — we may need spies and informants and a strong defense when necessary, but if we are a beacon of liberty, scrupulous about due process and respectful of the rights of all rather than a world enforcer, they will flock to us.

For almost 150 years the United States had no laws restricting immigration; the first such law, the honestly named Chinese Exclusion Act, was passed in 1882, and comprehensive restriction didn’t come until the 1920s. The decades of mass immigration coincided with remarkable economic growth and the development of the United States into the world’s leading industrial and economic power.

If human rights are universal, the right to decide where one wants to live and move there through one’s own resources doesn’t belong only to those born in America. The most effective and just way to regulate immigration is through market forces. Actual employers know how many workers are “needed” in the country better than any bureaucracy in Washington, and they adjust to changing conditions.

If the economy ever dries up, or goes through recessions, fewer people will be hired, word will get around, and fewer people will want to immigrate. We’re already seeing it today as the construction industry faces trouble.

To be sure, immigration now is different than in previous eras for two reasons: We have created a welfare state and an entitlement mentality, and our schools no longer do much to Americanize the children of foreign-born residents.

So let’s stipulate that open immigration will work better and create fewer hard feelings if we reduce or eliminate the welfare state and reprogram schools to teach the fundamental American principles found in the Declaration of Independence, the Constitution and other founding documents.

Most people through most of history have lived in poverty. It has only been in countries where something resembling market capitalism has been instituted that enough wealth has been produced that significant numbers of people have been able to lift themselves out of poverty. Therefore the most effective way to fight poverty is not through government programs, subsidies or make-work jobs, but by making the market as free as possible from government regulations, licenses and barriers to entry into business. Even health and safety regulations can be, and usually are, overdone.

Income levels in this country increased most dramatically during the latter half of the 19th century, the closest we have come to having a laissez-faire economic policy. Government intervention doesn’t alleviate poverty. U.S. unemployment stood at 17.4 percent in 1931, before various federal programs were launched to combat the Great Depression. Seven years later, after doubling federal spending and years of New Deal programs, unemployment was 17.4 percent. From 1965-95 the federal government spent $5.4 trillion on anti-poverty programs, yet poverty levels hardly budged. Government programs also crowd out private and faith-based charity, which is more effective than the government because it usually addresses behavior and relationships — “teach a man to fish” — as well as the mere money aspect of someone’s life.

The principle applies globally. Free markets and free trade, leading to “globalization,” are the most effective anti-poverty programs for individuals and countries as well. Because abilities and luck vary, freedom won’t bring about equality, but it’s the best way to reduce poverty.

Personal responsibility may be undermined more in health care than in any other aspect of life. When people are responsible for the cost of their unhealthy lifestyles, they’re more likely to avoid doing what brings on costly consequences. But when others assume the cost, people are inclined to engage in riskier behavior. Consequently, many take better care of their cars than their health.

Health care, however, took a wrong turn during World War II when personal responsibility was replaced on a large scale by corporations, which were prevented by the government from giving raises and instead received tax credits if they provided employees health insurance. Third-party payments have accelerated to the point now that we find, unsurprisingly, they are reaching their limit paying for what others demand.

Despite this arrangement so egregiously undermining market constraints, there’s a growing insistence that the government, the ultimate third-party payer, must take over. Rather than douse the fire, some want to throw gasoline on it.

Were only calamities covered, this might work better. But third-party paying has conditioned people to think that health insurance should cover routine checkups as well as major surgery. No reasonable person would apply such a catastrophic solution to automobile care.

In the developed world, America is known for high rates of both crime and incarceration. In one respect, this makes sense; the greater the number of people breaking the law, the greater the number of people facing the consequences. But if incarceration is meant to be a solution to crime, rather than a function of it, then those statistics are a sign that the solution isn’t working. Here’s how we can fix it:

First, the definition of crime should be narrowed to those acts that harm others. The solutions to victimless “crimes” like missing bureaucratic paperwork or private drug use are sentencing reform and decriminalization. Reducing the number of so-called crimes and the severity of corresponding punishments will reduce the strain on our overcrowded prisons — whose 2 million-plus population includes hundreds of thousands of nonviolent drug offenders — and allow “criminal justice” to focus on criminals who actually threaten public safety.

Second, that justice system needs to focus on rehabilitation, not just retribution. The good done by taking criminals off the streets is offset when they are released still more violent and maladjusted, as is attested by the two-thirds of California’s parolees who end up back behind bars. The $60 billion spent on prisons should be shifted away from paying salaries of union employees guarding human warehouses and to funding transparent, competitive facilities for rehabilitation and work reentry — in fact, in line with some of the reforms under way in California today.

Being tough on crime shouldn’t mean more of the same; it should mean fixing the vicious cycle of crime and incarceration by redefining both.

R.C. Hoiles was famous — or infamous — for his objection to the very premise of schools run by the government. America would be better off, he believed, if private institutions arose, funded by various sources, to meet the incredibly varied learning needs and aptitudes of individuals.

Education, of course, as Hoiles knew, is fundamental for society’s prosperity, a culture’s perseverance and individual achievement. We’re never more than one generation from eviscerating either, or both.

The problem is public education, Hoiles wrote. Government schools don’t dare teach liberty or independence because at essence, they operate by denying both.

“They dare not teach the spirit of the Constitution as set forth in the … Declaration of Independence,” Hoiles wrote, “because it says that all men, not just the majority, are endowed by their Creator with certain unalienable rights.”

Majority rule endows government-run education. It obligates “compulsory education” and forcibly assigns costs even to those who’d rather not pay. It’s understandable the product is wanting.