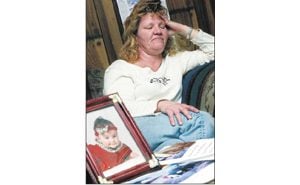 Sandie Emery of Phoenix gathers her thoughts Monday while talking about her sister, Patricia Emery-Wade, who was found dead in her car, holding her 3-year-old daughter, Angelica.

Sandie Emery of Phoenix gathers her thoughts Monday while talking about her sister, Patricia Emery-Wade, who was found dead in her car, holding her 3-year-old daughter, Angelica.

Sandie Emery didn’t get a chance to make things right with her sister before she died. But she has vowed to do right by her 3-year-old niece — a dark-haired beauty who survived five days trapped in a wrecked car, eating crackers and snuggling with her mother’s dead body.

Angelica "Angel" Emery-Wade spent Monday night in intensive care at Maricopa Medical Center in Phoenix for frostbite to her fingers and feet. The toddler was found by an Arizona Department of Public Safety officer at about 11:30 a.m. Monday in a car off U.S. 60 between Globe and Show Low.

DPS officers and family members said the toddler’s mother, Patricia Emery-Wade, 44, of Phoenix, left Wednesday afternoon for a two-day visit to her youngest brother in Show Low. When she didn’t show up by 11 p.m., she was reported missing.

On Monday, a motorist spotted what appeared to be a car in a ravine about 20 miles north of Globe and told officers they needed a taller vehicle to see it. A DPS officer, standing atop a snowplow, found Emery-Wade’s 2002 Kia smashed into a tree and her body inside, said DPS spokesman Frank Valenzuela.

"The little girl was found in the vehicle," Valenzuela said.

"She was sitting cuddled up next to her mother," Valenzuela said

It appears that sometime after Emery-Wade crashed, she got her daughter out of her car seat and covered herself and the child with a blanket, Valenzuela said.

It’s unclear when Emery-Wade died or what caused her death, Valenzuela said.

"Angel was able to give the officer her name and her age, and she was able to articulate that she’d been out there a few days," Valenzuela said. "She had been eating crackers."

The girl may require surgery because of the frostbite but is expected to make a full recovery, Valenzuela said.

Since the day the two were reported missing, low temperatures in that area have been in the high 30s to low 40s, with the low dipping to 28 degrees Monday, a National Weather Service spokesman said.

Emery-Wade’s brother John Emery, 42, traveled the route between Phoenix and Show Low three or four times in the hours after his sister disappeared.

He told Sandie Emery what happened.

"I lost it," Sandie Emery said. "The first thing that came to mind was that I didn’t get to tell her how sorry I was. ‘Let’s forget about the past. Let’s start over.’ Maybe Angel will be our new beginning."

After Emery-Wade lost custody of her two oldest children, she drifted away from four of her siblings and their parents, Emery said. She stayed in touch with her youngest brother. The last time the sisters spoke was about two years ago, when Angelica was 1.

One of the five siblings will likely raise Angelica now, Emery said.

They will have plenty of stories to tell the girl about the six of them growing up together.

"I’ll tell her about when we used to ride a bananaseat bike, and she’d cover my eyes," Emery said, laughing. "We’d fall over, and I’d laugh so hard I’d pee all over the both of us."

The little girl will also grow up knowing how strong and how nurturing her mother was, Emery said.

"There should be more moms out there like her," Emery said. "Until her last breath, she was taking care of her."