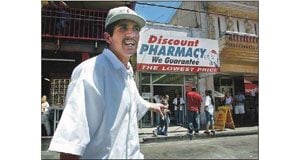 STREET SELLER: A peddler for the Discount Pharmacy store in Nogales, Mexico, tries to sell the muscle relaxant Soma.

STREET SELLER: A peddler for the Discount Pharmacy store in Nogales, Mexico, tries to sell the muscle relaxant Soma.

NOGALES, Mexico - Here, just across the border, neon-colored signs in the windows of dozens of pharmacies scream "Soma for sale."

Salesmen in white lab coats battle for business on the sidewalks and will readily fill orders for several thousand of the muscle relaxant pills.

"About 60 percent of the people who buy Soma are the younger people," said Israel Sandoval, a manager at Con Vida pharmacy.

Pharmacy workers said they fill Soma orders several times a week for American teenagers, a trend that has been going on for years.

But the Soma pipeline from Mexico has been largely hush-hush in the East Valley until police broke up a couple of Soma drug rings recently at local high schools.

A 16-year-old Gilbert girl was arrested last month and later charged with two drug-related crimes, and seven other teens could face similar charges after Soma was found at five Mesa and Gilbert schools. Twenty-nine Gilbert students were suspended in March for buying, possessing or selling the drug on campus.

As the prescription drug trend has come to the forefront, Mexican officials say they are cracking down on pharmacies that sell the drug without authorized prescriptions, while U.S. Drug Enforcement Administration officials plan to propose placing the drug under federal control.

Soma, or carisoprodol, is a muscle relaxant that requires a prescription in Arizona. In Mexico, it is sold under the name Somacid, a less expensive brand manufactured in Guadalajara.

Last month, the Mexican federal Secretariat of Health sent a letter to Nogales pharmacies warning that Soma was a controlled substance and was illegal to sell without a prescription from an American or Mexican doctor, pharmacy employees said.

But Dr. Jaime Leon, an official with the Secretariat of Health in Hermosillo, Mexico, could not confirm if Soma has been officially reclassified under the country’s General Health Law.

"Unfortunately, a revision would still make it hard to control," Leon said. "It would still be sold freely."

And that’s apparent. Most pharmacies continue to sell the drug with no questions asked.

"I can write a prescription for $20 extra," offered one salesman from Discount Pharmacy, the city’s largest pharmacy chain. "It will say your name and take once a day or once an hour, whatever you want."

Soma is not only easy to purchase in Mexican pharmacies, but it is legal to bring across the border in small amounts without a prescription.

All prescription medications from Mexico require a prescription from an American doctor, said Joyce Jarvis, a supervisor with the U.S. Customs and Border Protection.

But the customs agency and DEA allow travelers to bring back up to 50 pills per person of any FDA-approved medication from Mexico without a prescription, federal officials said. The DEA considers that to be a reasonable amount of pills for legitimate personal medical use.

The pills must be declared to customs officials, or officials can seize the drug and fine violators the domestic value of the medication.

"We are seeing in recent years the regulations being exploited by some people bringing the drugs into the U.S. for illicit use," said Ramona Sanchez, a spokeswoman for the DEA in Phoenix.

The concern has prompted DEA officials to look at making Soma a federally controlled substance, which would place enforcement duties with the DEA instead of local police. A federal jurisdiction would mean harsher sentences for Soma buyers, distributors and traffickers.

Sanchez said the DEA is beginning the process by gathering information on Soma for a report to be presented to the Department of Health and Human Services to reclassify the drug.

"When we see teens abusing a drug like this, you can bet it will slowly creep into our radar. We take it very seriously," Sanchez said. "Hopefully it will prompt Mexican authorities that the problem is filtering in through the U.S."

• Soma is a prescription muscle relaxant manufactured in the United States.

• Abuse of the drug can result in addiction, seizures, coma or death.

• Somacid is a Mexican brand manufactured in Guadalajara.