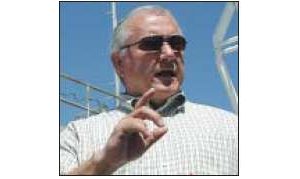 East Valley lawmaker Russell Pearce angered the Hispanic community this week when he called for the reinstatement of a pre-civil rights era program that called for the mass deportation of illegal immigrants.

Rep. Pearce, R-Mesa, said during an interview on “Morning Edition” on KJZZ (91.5 FM) that he would support bringing back a controversial federal program dubbed “Operation Wetback,” which was designed to apprehend and deport illegal Mexican immigrants in the mid-1950s.

Pearce has made it a priority to fight for new laws that would increase border security and reduce the flow of illegal immigrants. He blames the country’s current immigration policy for high crime rates, low wages and the deterioration of American culture.

“We know what we need to do,” Pearce said on the radio show. “In 1953, Dwight D. Eisenhower put together a task force called ‘Operation Wetback.’ He removed, in less than a year, 1.3 million illegal aliens. They must be deported.”

The term “wetback” is widely considered derogatory. It was first used to describe those who swam across the Rio Grande to cross the border into the United States.

The Arizona Democratic Party pointed out Pearce’s comments in a news release Thursday that contained expressions of anger from Hispanic activists.

Roberto Reveles, the president of Somos America, called Pearce’s comments “outrageous” and said his support of such a policy reflects “a sense of insecurity on his part and his fear and loathing of undocumented immigrants.”

“(Pearce) is on a constant campaign of demeaning people and creating an imagery of them in the public’s mind as being somewhat less than human,” Reveles said.

Pearce defended his comments on Thursday and accused immigration activists of supporting “lawbreakers.”

It would cost more than $40 billion a year to round up and deport the millions of illegal immigrants living in the U.S., according to a study last year by the liberal think tank Center for American Progress.

Pearce said he was only referring to the term “wetback” in its historical context. He said he would never refer to somebody by that word because he knows it could hurt feelings.

“In the ’50s it was common. In the ’60s it was common. You don’t use it today because people have tried to make it offensive,” Pearce said. “Things change, and you know what? Who cares? Whatever they want to be called, I’m OK with that.”

Pearce said nobody has the right to “break into this country, whether it’s the Irish, the Asians or the Latinos.”

He said he likes to use terms “that are very graphic” to make a point, and that he frequently gets calls from constituents who want the government to adopt more aggressive anti-illegal immigration policies. Pearce is running for re-election with Rep. Mark Anderson, R-Mesa, against Democratic challenger Tammie Pursley. They are vying for two seats on the state House of

Anderson said he was surprised that Pearce was so overt about his support for the program.

“I’ve never heard him say that before in such a direct way,” Anderson said.

Anderson added that he supports securing the borders, but opposes mass deportation.

“It’s not realistic,” Anderson said. “Once the border is secure, we can come up with some way for people to earn their citizenship.”