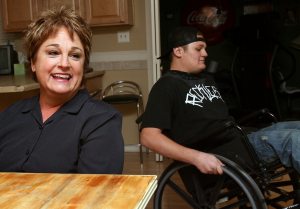 FAMILY: Pam Kazmaier talks about living with bipolar disorder while her son, Zack, does a wheelie in brother Mike’s wheelchair at the Kazmaier home in Mesa on Dec. 14. Mike used the wheelchair while recovering from a broken leg. 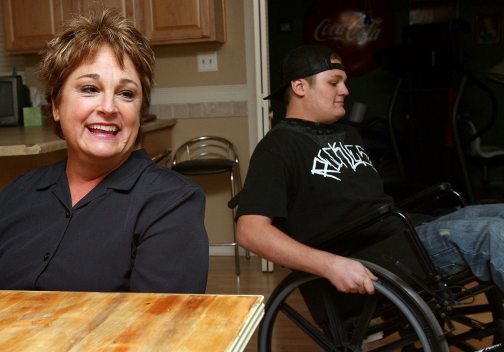 FAMILY: Pam Kazmaier talks about living with bipolar disorder while her son, Zack, does a wheelie in brother Mike’s wheelchair at the Kazmaier home in Mesa on Dec. 14. Mike used the wheelchair while recovering from a broken leg.

On a sunny Sunday morning in early fall, Mesa police Lt. Kevin Kazmaier drove his wife and youngest son home early from church, before 12-year-old Zack could disrupt the Mormon service and embarrass his brother again.

Today: Together in death

Wednesday: “I am not their servant”

Zack had been spiraling out of control for weeks, but no hospital would take him. Years of psychiatric medications and advancing puberty were buffeting his mind and body. He was manic, attacking brother Mike with a paper-towel rod and threatening to kill himself at every turn.

Sixth grade at Field Elementary School began with such promise, but now his teachers were saying they just couldn’t handle him.

His longtime psychiatrist adjusted Zack’s medications three times in September, then told Pam and Kevin Kazmaier to get used to their son’s bizarre behaviors. The family would learn later she was battling her own demons.

Pam was spiraling, too, but in the opposite direction. Her bipolar disorder, undiagnosed for most of her life, was banking dangerously low. The family’s one solace — a small cabin in Taylor where the boys rode all-terrain vehicles — was threatened by neighbors complaining about the noise.

As Kevin drove back to join his older boy at church, Pam started changing into more comfortable clothes. She moved slowly, methodically. Like she was pushing through a fog.

Her obsessive-compulsive side, along with the mania of her bipolar illness, accounted for her neat-as-a-pin house and had served her well as a detail-oriented obstetrics nurse at Banner Mesa Medical Center.

A little mania would have come in handy now. But it had abandoned her, leaving only the black hole of depression. She looked up as Zack walked into the bedroom.

“Mom, let’s kill ourselves,” he suggested, grinning from ear to ear.

He had tried so many times before. In fact, the boy had been trying to end his life for most of it. He’d put ropes around his neck, cut himself with knives, leaped from moving cars and nearly threw himself off the roof of a parking garage at Fiesta Mall.

His mother kept a blue suit handy for his funeral, fully expecting him to one day succeed, like his 14-year-old cousin before him, just a few months earlier. He shot himself with a gun that Pam and Kevin had given to his father.

Now, as she considered the burly, brown-eyed boy, it seemed like the only choice they had left.

Together in death, Pam thought, they would be free.

Released from the tangled web of the mental illnesses that bound them, that they couldn’t escape and that consumed all of Pam’s time and energy. Drugs, doctors, therapy sessions, teacher conferences. None of it was working. Zack was getting worse.

Pam was drowning, neglecting her own mental illness and shouldering the burden of caring for Zack. She hadn’t worked since he was born, or slept much either, in the same house with a boy who had night terrors and regularly threatened his life and theirs. She had dedicated her life to her family, her Mormon church and, most of all, Zack’s illness. She had completely lost herself.

If they were gone, Pam thought, Kevin and Mike would be free to live their lives without the burden of a mentally ill mother and son.

No more calls from school. No more worries about how their “crazy” family looked to Mike’s junior high classmates or the neighbors or Kevin’s colleagues at the Mesa Police Department, where he commanded the bomb squad.

No more of Zack’s outbursts at their Mormon Church ward and at Boy Scout meetings.

Pam was too tired to bother with killing herself. But the boy was bent on it, and she couldn’t let him go alone. In her psychosis, she reasoned she needed to protect her son on his journey to the other side, like a loving mother holds her child’s hand while crossing a busy street.

They would take their medicine — more than they should — and then drift off to sleep together. Zack gathered his pills. Pam collected her own, and began swallowing handfuls.

She didn’t need to help Zack take his; he’d been doing it four times a day for years.

Zack taped a note to the master bedroom door: “We are taking a nap.” They locked the door and pushed an antique oak dresser in front of it.

They wrote their goodbyes to Kevin and Mike and slipped the paper inside one of the pillow cases.

“Mike and dad we love you!” Zack wrote. “life iss to hard”

“Mike — Kevin — Your life will be better (without) us. Charlie — we’ll be seeing you!” Pam wrote. Charlie was her nephew, Zack’s cousin, who had killed himself.

“Do not take us to the hospital. Let us go,” read another note, tucked inside the Book of Mormon. “We can’t live in your world. Zack said give all my swords to Quentin. Mikey we love you with all our heart.”

Pam took a picture of Jesus off the wall and placed it between them on the quilt as she lay down on the bed next to Zack. They held hands. The room swirled, then went black.

Finally, she would get some rest.

Today: Together in death

Wednesday: “I am not their servant”

Information contained in these stories comes from court records and hearings, hospital and medical records, police reports, school records and interviews with the family and others involved in Pam Kazmaier’s case and her life.

Bipolar disorder (also called manic depression, bipolar affective disorder) is characterized by periods of excitability (mania) alternating with periods of depression. The mood swings between mania and depression can be very abrupt.

It occurs equally among men and women, and there is some family connection. Bipolar disorder results from disturbances in areas of the brain that regulate mood. There is a high risk of suicide with bipolar disorder and a tendency to abuse alcohol or drugs, which can worsen symptoms.

The depressed phase may bring feelings of anxiety, low self-esteem and suicidal thoughts. Symptoms include persistent sadness, listlessness, sleep and eating disturbances, loss of self-esteem, feelings of hopelessness, worthlessness and guilt, withdrawal from friends and activities or persistent thoughts of death.