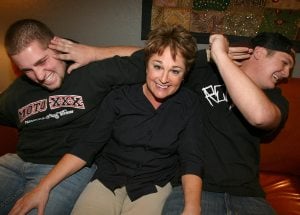 Pam Kazmaier is stuck between her two sons Mike(left) and Zack Kazmaier as they fight with each other at the Kazmaier home in Mesa. 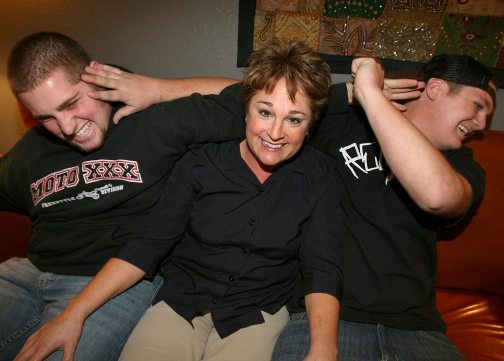 Pam Kazmaier is stuck between her two sons Mike(left) and Zack Kazmaier as they fight with each other at the Kazmaier home in Mesa.

Pam Kazmaier’s skin was crawling. For the first time in 12 years, she was without psychiatric medication.

Sunday: Together in death

Today: “I am not their servant”

After a few days at a Mesa hospital recovering from an intentional drug overdose, she was taken by ambulance to a locked ward of St. Luke’s Behavioral Health Center in Phoenix, arriving barefoot in her hospital gown.

Her 12-year-old son, Zack, who had tried to OD with his mom, was in the same place, on the pediatric ward. He’d been suicidal since he was 4, but his mom always stopped him. This time, however, while her husband and older son, Mike, were at church, Pam went along with their double-suicide plan and was being investigated by Mesa detectives. She’d already refused a police interview and her husband had hired an attorney.

Suicide seemed like a good idea at the time, since both struggled mightily with bipolar disorder. Zack had been deteriorating drastically in recent weeks and Pam was deeply depressed. Now she was locked up, cold, paranoid, facing child abuse charges and frantically worried about her son.

Zack was doing fine. Better than ever, in fact. His doctors at St. Luke’s were weaning him off the antidepressants that had made him want to die. For the first time since anyone in his family could remember, Zack seemed to be looking forward to the future.

“At times, I feel sad that I did not die and sometimes I feel happy that I am back with my family,” Zack told a psychiatric nurse.

But he was eating and sleeping and even making friends in the children’s unit. The staff there noted that Zack was making good progress during his stay.

They worried, however, that “he seems to share a belief system with his mother which seems somewhat unhealthy at this point.”

Indeed, as they shared a diagnosis, mother and son had melded in other ways, too. It was sometimes hard to tell where Zack ended and Pam began.

She included quotes from teachers, doctors and Zack — “I want to strangle myself slowly” — and even recorded lists of reading scores and books he’d read.

While they were at St. Luke’s, one of Zack’s therapists visited Pam and told her how well he was getting along. He’d be released and be back at Field Elementary School in a few days. It was time for Pam to focus on her own recovery.

During two weeks of group therapy, with lessons on anxiety and anger and self-awareness, Pam learned many things about herself.

She learned she was obsessive compulsive.

She learned she had become enmeshed with Zack, beginning with his difficult birth, and, because of her mental illness, her nurse’s training, her maternal guilt and the daily grind of caring for everybody, she’d been unable to break free.

She learned she had lost herself so completely — buried under the weight of Mormon Church requirements, cleaning up after three messy macho males, obsessively focused on Zack’s every move — that she didn’t know how to get back.

Now, in addition to being a failure as a mother and wife, she was looking at more than 30 years in prison. Not that she cared. Her self-esteem was ground down so low that Pam probably would have willingly done the time.

“Dr. Holland grabbed me: ‘You’re going to be arrested at discharge.’” she wrote during her stay at St. Luke’s. “I feel so sorry for Kevin. Fitting justice for me though.”

Kevin was her husband, a Mesa police lieutenant and commander of the department’s bomb squad. In addition to juggling Zack and Pam’s attempted suicide and hospitalization, and looking after their 14-year-old son Mike, he was waiting for his colleagues to arrest his wife.

“The social worker called me a ‘mother-murderer.’” Pam wrote. “At the time, I thought I was helping Zack, Mike and Kevin. I had a real break from reality when I gave Zack his pills.”

During her two-week hospitalization, Pam wrote furiously on loose-leaf paper, in the margins of pamphlets, on the backs of handouts. She began making her recovery plan. She would exercise, get her hair cut and colored, drink herbal tea, take 15 minutes of sun every day, pray, do her nails, erase computer “research files” on Zack and get a new therapist, “just for me.”

While the staff at St. Luke’s worked on Pam’s self-esteem and she repeated a daily affirmation, “I am not their servant,” investigators were building their child abuse case.

Suicide notes found during a search of the Kazmaier home, Zack’s statement the morning after and a pediatrician’s opinion that he could have died from the pills provided probable cause to arrest Pam and, 10 days later, found sufficient to get a grand jury indictment.

Later testimony would indicate Zack had taken his regular night medication, four pills, for his bipolar disorder, hyperactivity and sleep problems and was never in any real danger. Still, she faced 30 years in prison.

Word of her pending arrest reached her longtime Mesa psychiatrist, Dr. John Jarvis, who wrote a letter on her behalf.

“This alarms me, since the dynamics of that behavior were more reflective of her compassion for her son, while nevertheless reflecting a moment of a serious lack of judgment at that point,” he wrote.

Her treating psychiatrist at St. Luke’s, Dr. Donald Holland, added his opinion: “Due to her psychiatric illness, it is my opinion that incarceration would be detrimental to her continued mental health care.”

During group therapy a few days before she was released, Pam scrawled on the handout: “I WANT TO STAY HERE.”

She was discharged from St. Luke’s Oct. 14 to police, who took her to East Mesa Justice Court and booked her on child abuse charges. Kevin picked her up and took her home.

Remarkably, the family was holding together.

Zack was shaky, but rebounding. Kevin and Mike were angry, but careful.

Pam still wasn’t sure if she wanted to live. She feared going back to the life they had. So many things had to change.

Information contained in these stories comes from court records and hearings, hospital and medical records, police reports, school records and interviews with the family and others involved in Pam Kazmaier’s case and her life.