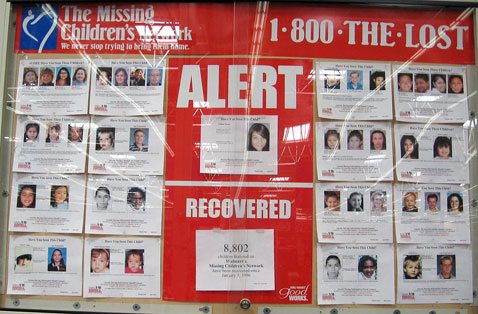 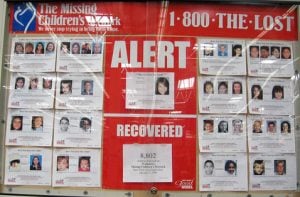 The Missing Children’s Network board inside a Walmart store.

The Missing Children’s Network board inside a Walmart store.

The faces of Baby Gabriel and his now-jailed mother, Elizabeth Johnson, have been mainstays locally and nationally in newspapers and on television screens nationwide. But as much as this one missing child case has been in the spotlight, the cases of 10 other missing East Valley children have faded into the background with the passage of time.

TIMELINE: The search for baby Gabriel

It’s been four months since the disappearance of Baby Gabriel first captured the attention of the Valley and the nation.

CNN’s Nancy Grace focused several episodes of her show on the story of the missing 11-month-old Tempe boy, authorities launched a nationwide investigation, and a San Antonio landfill was searched for evidence of the child’s remains.

The faces of Gabriel and his now-jailed mother, Elizabeth Johnson — who still refuses to reveal the baby’s whereabouts — have been mainstays locally and nationally in newspapers and on television screens nationwide. But as much as this one missing child case has been in the spotlight, the cases of 10 other missing East Valley children have faded into the background with the passage of time.

Timeline: The search for baby Gabriel

There are six missing children from Tempe and five from Mesa, according to the National Center for Missing and Exploited Children based in Virginia. Some of them have been missing so long they would now be adults if they are alive. They are among 64 missing children from Arizona alone, according to the center, which lists such cases on its website, www.missingkids.com.

A number of the disappearances occurred before the days of mass distribution of missing children photos on milk cartons, Amber Alerts, cell phones, DNA evidence and the Internet. Today, missingkids.com is able to use age-enhanced photos to show how the missing look now, even decades later.

But their children remain forever young in the minds of parents who last saw them before they went to a party, walked siblings to school, or left the house to wait for an ice cream truck, never to return.

Sisters Jackie Leslie, 13, and Cynthia Leslie, 15, disappeared within a three-block area while walking along Baseline Road near Power Road from their east Mesa home on July 31, 1974. They were on their way to a party.

“There’s never a day that I don’t say a prayer where I’ll find out what happened to my daughters,” said Erma Prue, 78, who now lives in Henderson, Nev., to be close to her oldest daughter, her only other child. “You never give up hope.”

In a recent interview with the Tribune, Prue said she doesn’t believe the girls would have abandoned their family, especially given their father’s medical condition at the time. Albert Jack Leslie died of cancer on Feb. 21, 1975, about seven months after the girls disappeared.

Authorities, Erma Prue and her daughter, Linda Herring, believe Jackie and Cynthia met with foul play somewhere between their home and their destination.

“I’ve tried to keep the story of their disappearance alive so nobody forgets about it,” Prue said. “I think there is someone out there who knows what happened to them and never came forward.”

There were conflicting statements as to whether the sisters attended the party.

Some people questioned by police said they did; others said they stopped by briefly and left.

“I believe they got in with the wrong crowd,” Prue said.

Herring said that after her sisters disappeared none of the people who often called Cynthia and Jackie on the phone ever called the house again.

“I thought that was strange,” Herring said. “We believe something happened to them ... and we hope that someone who knows what happened will say something.”

The sisters’ disappearance was in an unincorporated area of east Mesa at that time under the county’s jurisdiction.

Although no remains were ever found, the case is considered a homicide because of outstanding suspicious circumstances.

Many people were questioned, but no one was ever a suspect, according to Maricopa County Sheriff’s Office Detective Steve Gurlach, who has investigated leads in the case for several years.

The most recent tip received by the sheriff’s office came from out of state in February 2009, and actually led to the excavation of a backyard of a Cottonwood home last summer, according to Gurlach.

However, the excavation turned up nothing.

“Two healthy teenage girls just don’t disappear and aren’t heard from again,” Gurlach said. “Something happened, and there’s a great fear that they met with foul play. ... Somebody somewhere knows something.”

‘We never want to give up’

Since it formed in 1986 with the help of “America’s Most Wanted” television personality John Walsh, the National Center for Missing and Exploited Children has recovered hundreds of children and returned them to their families, according to Bob Lowery Jr., executive director of the center’s missing children’s division.

Acting on a firm belief that someone out there knows what happened in each incident and that time is the enemy of a missing children’s case, the center follows a case until it is known what happened to that child.

When tips come in to the center’s hotline, they are shared with the local police department in that case’s jurisdiction.

In many cases, representatives from the center provide assistance to police departments.

“We never want to give up the possibility that missing children are out there waiting to be found,” Lowery said. If a child were to be killed by their abductor, it likely would happen in the first three hours of their disappearance, Lowery said.

“Mobilizing everything in the first minutes or moments that a child is realized missing is critical.”

But even then, some cases are never solved.

This year marked 11 years since Mikelle Biggs, 11, of Mesa, disappeared in a high-profile case that received national attention.

Mikelle was last seen riding her bicycle near her home on Jan. 2, 1999.

It was a little before 6 p.m. when Mikelle heard the bells of an ice cream truck and asked her mom, Tracy Biggs, for money. Mikelle and her younger sister, Kimber, then 9, went to the corner of El Moro and Toltec to wait for the ice cream truck, according to police.

But Kimber got cold and went back to their home four doors away on El Moro to get a jacket.

A neighbor driving by saw Mikelle standing alone on the corner under the street lamp with her sister’s bicycle.

Tracy Biggs sent Kimber back outside to fetch her sister, but Mikelle was gone.

Her bike was discovered a little closer to the house, lying on its side with the wheel still spinning, police said.

Police dogs picked up her scent but lost it within a few feet, leading investigators to believe she was placed into a vehicle and driven away.

But all ice cream truck drivers in the area were cleared in the case, and Mikelle was never found.

She would now be 22 years old.

Certain that Mikelle is dead, the Biggs family buried a white casket on Jan. 2, 2004.

“It’s logical to think that after cases go on for an extended amount of time, the outcome is not going to be a good one,” Lowery said. “We don’t want to provide false hope, but we don’t want to abandon it, either.”

It’s been four months since Gabriel Johnson was last seen after his mother, Elizabeth Johnson, took him to San Antonio in the midst of a custody battle with the boy’s father, Logan McQueary of Gilbert.

At one point, Johnson told McQueary she had killed their son; she said she stuffed his body into a diaper bag and threw him in a Dumpster, according to court documents.

But a landfill search turned up nothing. She told an FBI agent that she had given the child away to a couple at a San Antonio motel a day after meeting them in a park.

Meanwhile, McQueary believes his son is alive and has been conducting his own investigation to find him.

“A lot of emotion goes on in these cases,” Lowery said. “Parents believe they are providing a better home and better lifestyle for their child, or they want to get revenge on their spouses during a divorce, and the child is often used as a token of that revenge.”

Regardless of the circumstances, when a child is missing, parents hold onto hope for a long time that their family will be reunited, or that they will at least finally have answers.

Nearly 36 years since her daughters vanished, Prue believes the truth is out there and that she will find it.

“The only thing I can tell parents of missing children is that they have to trust God, and have faith in him — I know I do,” she said. “That’s what has kept me going.”