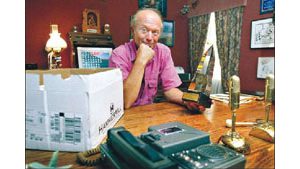 Valley radio talk show veteran Preston Westmoreland is off the air after 26 years.

Westmoreland and a local media observer say his departure likely was part of a movement toward younger hosts to attract advertisers — a charge his former employer, KTAR (620 AM), disputes.

The move comes on the heels of a sports reporter’s departure from the station after more than 20 years.

The award-winning Westmoreland said he was taken off his drive-time slot after a meeting Monday with management. “I'm really just devastated,” he said, adding that he thought a youth movement at the station is probably to blame.

“I can't believe something like that would happen. In the business, it's always younger, younger, younger. But in the business of news and talk, I would question it. From my own experience, I've found really young kids are not obsessed with news and talk radio. I don't think they're going to listen. For a music station, I can understand the trend toward younger, but not for a news talk show host. I was never given a reason, but that seems to be kind of the direction they're going.”

The station said Ted Simons will replace Westmoreland from 3 to 7 p.m. It's Simons' second stint as afternoon drive-time host, and the station promised that he and partner Larry Gaydos would “keep the information delivery fresh.”

Bruce St. James, a program director at a KTAR sister station, will move into a slot from 12:30 to 3 p.m.

KTAR offered Westmoreland, 57, a shift from 7 to 10 p.m. on days when the Arizona Diamondbacks and Phoenix Suns don't play. Program director Tisa Vrable said the station hoped Westmoreland would offer listeners nighttime news and talk, especially during the presidential election season. “We feel that after 26 years, he's had a great run,” Vrable said. “He's actually been in different day parts before. He's not been in afternoon drive (time) forever. He's actually probably been there two years. We just thought it was time to do something different in afternoons again.”

Westmoreland turned down the night job, saying his pay would be cut by two-thirds, and he could be off the air for as long as two weeks at a time because of the Diamondbacks' schedule.

Westmoreland, the longest-running radio personality in Phoenix at one station, told the Tribune last year that he had done more than 26,000 interviews, including ones with Milton Berle, Jimmy Carter, Bob Hope and Hillary Clinton.

Last year he was given the Marconi Award, radio's acknowledgment of the best large-market personality in the United States. He was recently nominated for the Radio Hall of Fame, but he was not inducted. Craig Allen, an Arizona State University professor of journalism and telecommunication who follows Valley media, called Westmoreland a “pillar of radio in Phoenix for almost 30 years.”

He said the station appears to be hiring younger hosts who are perceived as more hip in an effort to boost ratings and increase advertising. The perfect demographic for advertisers is those from 18 to 49, he said.

Al McCoy, Suns broadcaster for 34 years, was let go earlier this year after 28 years at KTAR. “KTAR . . . has not taken the approach of so many other local stations around the country of going the syndication route,” he said. “That's an important decision they've reached, but that introduces the next problem of how you arrange those local figures in a way that's going to bring them back up to No. 1 ratings. . . . I credit them for taking the high road of keeping their programming local, but it introduces decisions that can be difficult and that can be second-guessed by a local community.”

“Al McCoy was a wonderful brand, obviously, great heritage, great name,” she said. “But Paul Calvisi does a lot for the radio station.” Vrable said she did not know how old Ted Simons and Bruce St. James are.

“I honestly don't make decisions based on that,” she said. According to Arbitron, KTAR's overall ratings are on the increase. In the spring, the station ranked second in the market behind KOOL (94.5 FM) with 5.2 percent of the listening audience. In the winter, it was fifth with 4.9 percent. Westmoreland said his show is ranked fourth in the entire market and is still leading its time slot among news and talk stations despite dismal years for the Suns and Diamondbacks, which are often are wrapped around his broadcasts.

Last year, he said, the show was No. 1 in the entire market for most of the year, he said. Vrable said the decision wasn't based entirely on Westmoreland's latest numbers.

“There's many things that go into a decision like this,” she said. “It's a long-term strategy that allows us to make this kind of decision.”

Allen said station's lineup changes may be caused by a number of factors, including the attention given to the presidential campaign.

“KFYI, their main competitor, benefits by that because it attracts kind of the Fox (News Channel) audience, the more conservative-type people,” he said. “KTAR has no image or no service that counteracts that. KTAR is pretty much the Life magazine of talk radio stations, a one-size-fits-all, cover-the-waterfront approach. ”

KFYI (910 AM) moved up in ratings from fourth in the winter to third in the spring.