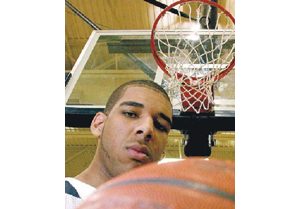 Xavier Kilby of Desert Vista High School, who was a second team All-Tribune basketball team selection, helped lead the Thunder to the state title game, where they lost to Mesa High on March 4. FILE

Xavier Kilby of Desert Vista High School, who was a second team All-Tribune basketball team selection, helped lead the Thunder to the state title game, where they lost to Mesa High on March 4. FILE

In addition, a former Desert Vista football player told the Tribune he did homework for teammates and was paid by the Tempe Union High School District.

These developments come when the district is facing a lawsuit by former assistant principal Jane Jones, who claims the school wrongfully terminated her after she uncovered evidence of improprieties, including grade changing and preferential treatment for athletes.

Sources who spoke on the condition of anonymity said Kilby's absences reached a high point in the third quarter of the school year, the peak of the basketball season. His class absences ranged from a high of 24 in a social studies course during the 45-day quarter to a low of nine in a math class. He had 95 total absences in that quarter.

Kilby, a second team All-Tribune selection, helped lead the Thunder to the state title game where they lost to Mesa High on March 4. He missed one game this season while serving an automatic suspension for a double technical foul.

Desert Vista principal Joe McDonald could not be reached for comment and district Superintendent Jim Buchanan said privacy laws prevent him from discussing any student's records. However, district public information officer Nicole Greason said the special-education department has been asked to look at the situation.

District policy states: “The eleventh total absence will result in loss of credit for the class, unless there are extenuating circumstances."

"We have a district attendance policy that applies to regular education students, and students who have excessive absences can fail courses as a result," Buchanan said. "If you fail courses, then your eligibility to participate in extracurricular activities is obviously very restricted."

However, Buchanan said different rules may apply to students enrolled in special education.

“It depends on what is going on in that student's (individualized education plan)," said Buchanan, who would not confirm Kilby is a special-education student. “Their situations are very specific to their particular disabilities and their sets of circumstances. Our requirements for extracurricular activity participation . . . are grade-based. Are you passing or failing your classes?"

But Arizona Department of Education spokeswoman Amy Rezzonico said it would be highly unusual for any plan to permit 247 absences.

“Never in a billion years would (a plan) say attendance is unimportant,” Rezzonico said. “In my experience in a year-and-a-half here I have never heard of this many absences with a student that is still passing his courses. Good attendance is pivotal for student achievement."

“It would be a rare case if the student were actually (absent) from school and that was fine," said Tom Zello, special-education director for the Mesa Unified School District.

In a separate incident, former Thunder football player Chris Snow said Tempe Union paid him to tutor other athletes on the football team, including former standout tight end Elton Johnson, who played with Snow on the 1998 state championship team.

Greason said the district has a peer tutor program, but does not pay tutors.

Snow said the arrangement was to ensure that Johnson remained eligible for football. The arrangement and the source of payment were confirmed by two other sources.

“I was hired on as a tutor to help him get through it because he couldn't do it himself, and I use the term ‘help’ loosely. I'd say I did 70 (percent) to 80 percent of the work for Elton," Snow said. "Yeah, it seemed a little weird, but my grades were good so I figured that would be the reason they wanted me to help. Obviously they wanted him to play."

Snow said he could not remember how much he was paid, but said he was paid by check.

Join our inside sales team!