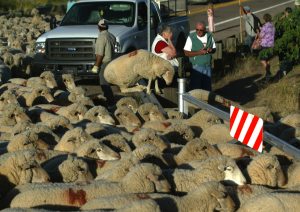 Sheep belonging to Dwayne Dobson cross over and under a gate near the Blue Point Bridge in April on their trek up north for the summer. 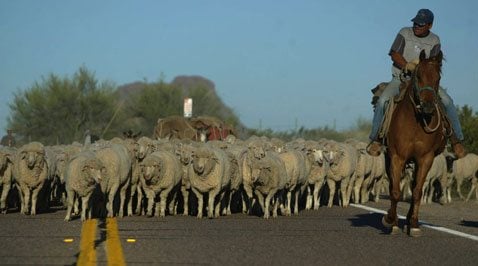 Sheep belonging to Dwayne Dobson cross over and under a gate near the Blue Point Bridge in April on their trek up north for the summer.

An environmental group filed suit last week to stop a century-old sheep drive from going through Tonto National Forest on its way to the southeast Valley.

An environmental group filed suit last week to stop a century-old sheep drive from going through Tonto National Forest on its way to the south East Valley.

The drive, which moves about 4,000 sheep between San Tan Valley and Heber in the spring and back in the fall, could lead to the deaths of herds of bighorn sheep, according to the lawsuit, filed Thursday by The Western Watersheds Project. The organization has fought to keep domestic sheep away from the wild bighorn sheep in other states.

Domestic sheep carry respiratory diseases that are fatal to the bighorn sheep, which "are gregarious, curious animals and are known to approach and make physical contact with the domestic sheep," the lawsuit states.

"It just takes one contact to potentially destroy a herd (of bighorn sheep)," said Eric Ryberg, the WWP attorney who filed the suit.

According to an Arizona Game and Fish Department risk assessment in 2008, the agency could not confirm large-scale die-offs of bighorn sheep due to respiratory diseases.

The Sheep Springs Sheep Co., owned by Dwayne Dobson of Chandler, is the only company that has a permit to use the trail, known as a driveway and officially known as the Heber-Reno sheep driveway.

The trail has existed since the 1890s and at the turn of the century it was designated a driveway by Presidential Executive Order, according to U.S. Forest documents.

Every April, Dobson drives the herd 220 miles to pastures on the north side of the White Mountains near the New Mexico border to spend the summer in cooler temperatures foraging and mating.

The flock, attended by dogs and herders with donkeys, begins its return trip to the East Valley in mid-August and travels about six miles a day.

Such driveways were common throughout Arizona and at one time there were as many as 400,000 sheep herded along the Heber-Reno driveway.

He is suing the U.S. Forest Service because the agency has never completed an environmental impact assessment as it is required under federal law and he wants it done before another sheep steps onto the driveway.

Ryberg said the Forest Service has promised for years to do the study and appeared to be ready to do it this year, but he got word it was put on the back burner.

"We want them to take a look at the risks this driveway poses to the bighorned sheep, to suggest ways to conduct the driveway that would not present those risks to the sheep, we want them to implement some protocols for what happens if a bighorned sheep is found to have commingled with a domestic sheep," Ryberg said.

He said he also wants the Forest Service to present the plan to the public so it is not just sheepherders making the calls.

Paige Rockett, a spokeswoman for the Tonto National Forest, said there is already an assessment under way and the goal is to have it completed by April 2010.

Rockett said the process moves slowly because the driveway goes through two national forests and the staffs from both have to coordinate the work. Staffing and funds have also been drastically reduced, she said.

Ewes are the ones that typically attract the bighorn sheep and only when they are in heat, Luhrsen said.

The ewes aren't in heat when they travel north and they are pregnant when they return, Luhrsen said.