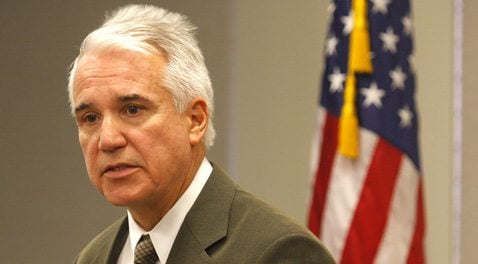 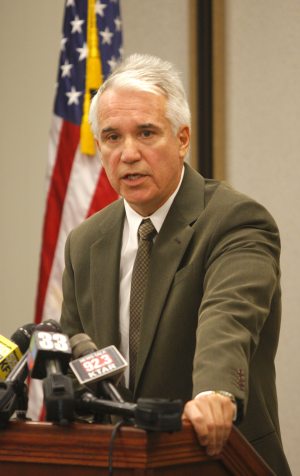 Outgoing Mesa police Chief George Gascón confirmed Tuesday that he was on the verge of being fired after his April trip to Washington, D.C., where he testified that illegal immigration enforcement should not be left to resource-strapped local police departments.

Outgoing Mesa police Chief George Gascón confirmed Tuesday that he was on the verge of being fired after his April trip to Washington, D.C., where he testified that illegal immigration enforcement should not be left to resource-strapped local police departments.

Serious crimes drop in Mesa since 2006

Gascon to pay back costs of congressional trip

Ending weeks of speculation by police union members and his own allies that he was forced out, Gascón told the Tribune he was informed following his return from the nation's capital that he was about to be terminated. Gascón declined to identify that person.

"I was not pressured to resign," Gascón said. "I was told I would get terminated."

Mesa City Manager Chris Brady told the Tribune that at no point did he ever tell Gascón he was being fired. "There were comments that there were many people who would want to see him terminated, but I never suggested he would be terminated," Brady said.

Brady did, however, add that he had expressed "a lot of disappointment" to the chief after he returned from the trip. "I think I said I was very disappointed. Maybe he interpreted that as me saying it was making me very hard to support him, that termination could be the ultimate consequence."

Brady said he was uncomfortable even before Gascón left for the trip, concerned that the chief would stir up controversy related to Maricopa County Sheriff Joe Arpaio because of the differences the chief and Arpaio have over illegal immigration, especially following the sheriff's national headline-making sweep of Mesa City Hall.

Brady said he had urged Gascón not to bring up Arpaio or his immigration policies during the testimony, to stay "professional." Brady even previewed Gascón's testimony to Congress. But upon questioning from a congressman specifically about that raid, Gascón criticized Arpaio's tactics, something Brady said could well have been avoided, even upon being asked specifically.

"You betcha I had some strong conversations with the chief about how disappointed I was," Brady said. "I wanted him to be judicious. We didn't want him speaking on policies of other agencies. But he did that anyway."

Brady also said he was taken by surprise upon finding out that Gascón's trip was paid for by an immigration activist group.

"I'll agree that when that came out, I absolutely had a strong conversation about how inappropriate it was," Brady said, adding that he was OK once Gascón paid the group back for the costs.

"I never, ever said anything and I don't know anyone who said his position would be in danger," Smith said. "Did he and I have honest discussions about responses from the community? Sure we did. If he perceived that as his position being in danger, I don't know."

Gascón's original congressional testimony was related to immigration laws and how he felt they needed to be enforced by the federal government and not just left to local law enforcement to deal with on a daily basis. Gascón said he was surprised by the reaction from city leadership when he returned from Washington.

He said he was told the City Council was not supportive of him, including the mayor.

Gascón believes that senior city leaders were being pressured by a vocal minority of extremists against illegal immigration.

In May, the Mesa Police Association, a union, came out in support of the chief.

"The Mesa Police Association (MPA) is outraged at the atmosphere created by the city manager, Chris Brady, within the police department and their police chief, George Gascón," the union said in a prepared statement.

Brady termed the association's statement as "completely untrue and baseless."

Gascón doesn't deny that the San Francisco position is a step up for him career-wise, but he said all of the political pressures and machinations made him take "a hard look" at his Mesa position, and pushed him to move on much sooner than he had initially planned.

Gascón declined to divulge details about his conversation with Smith and another council member over the Washington trip.

"It's all water under the bridge," Gascón said. "We resolved some differences."

He said he hopes there are lessons learned in this process by the city leaders, that they not get overtly influenced by political blogs or feedback that comes from "a vocal minority," who he said often misrepresent facts and work toward a political agenda.

Gascón has maintained that as a local police chief, with the limited resources he has, his focus will always stay on going after criminals, legal residents or not.

U.S. Marshal-Arizona David Gonzales, who worked with Gascón on a regular basis to deal with violent criminals, recently threw a farewell party for him, attended by top law enforcement officials from across the Valley. Gonzales said it was clear that the "political issues Gascón dealt with in Mesa and Maricopa County may have forced him to speed up the process to move on."

Former Maricopa County Attorney Richard Romley said there was a feeling among Gascón's peers in the Valley that the city management did not give him the "full" support "that they should have."

Romley cited Gascón's success in bringing the crime rate down in Mesa, and said when it came to policing, Gascón was admired for his achievements and intellect.

"It defies logic as to why his own city management would not be supportive. The only thing I can think of is politics," Romley said.

They maintain they've always heard from both Gascón's critics and supporters, but that none of that has been a factor in any policy decision-making, or their attitude toward Gascón.

"George's trip to Washington and the fact that it was paid for by a special interest group caused a lot of consternation and council members were concerned about that, absolutely. But if questioning the wisdom of (taking money from) a special interest group is perceived to be a hint that we wanted him out, that's not true," said Smith. "If the goal was to fire Gascón because of things he said about immigration, the Washington trip and that issue with the travel costs would have been the perfect out."

Smith also denied there was any direct pressure on him or anyone else to get rid of Gascón, or any political effort to rein in Gascón to please the anti-illegal immigration crowd, a strong presence in conservative Mesa.

"The City Council is in a political world and they get pressure," Smith said. "If Gascón perceived those discussions or pressures as dissatisfaction and lack of support on our part, I don't know what to say to that. That's a normal part of the game."