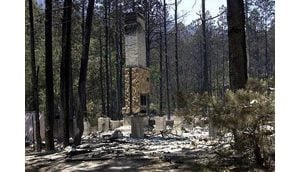 The charred remains of a cabin destroyed by wildfires is seen in Summerhaven Monday.

The charred remains of a cabin destroyed by wildfires is seen in Summerhaven Monday.

TUCSON - Firefighters fanned out above and below a raging wildfire on a mountaintop north of Tucson in an attempt to beat back flames that have destroyed more than 250 homes in a vacation community.

Crews used bulldozers to fight the blaze's northward spread on Mount Lemmon by digging a firebreak connecting roads, thinner vegetation and an area that already was burned over last year.

Firefighters also cut a line across the fire's southern flank, where crews battled all weekend to protect homes after burning embers started fires across earlier lines.

The blaze has charred more than 19,500 acres of pine forest on the mountain and was only 15 percent contained early Tuesday, firefighters' spokesman Gerry Engel said. About 950 firefighters had been deployed.

Firefighters faced more dry, windy weather Tuesday, with gusts expected to hit 25 mph and temperatures forecast in the mid-70s. By contrast, the temperature was expect to hit 98 in Tucson, about 6,000 feet below the fire-ravaged mountain community of Summerhaven.

Firefighters' efforts along the southern front got a boost when the blaze was twice repelled as it approached an area southeast of Summerhaven, where the fire had raced through Thursday and charred hundreds of homes.

"We made good progress today," fire commander Larry Humphrey said Monday. "We had no slop-over. It's just taking us time and it's slow because the wind is against us. So it's going slow but steady."

The fire swept through pine trees ravaged by years of drought and a beetle infestation, wreaking havoc atop 9,157-foot Mount Lemmon and heading down the north side in a wilderness area.

"The thing that hurts the worst is the loss of the forest," said Patty Kirchner, whose family has had a one-room cabin on Mount Lemmon since 1949. "Structures can be rebuilt, but the forest takes so long."

Elsewhere Monday, about 300 firefighters attacked a blaze in northern New Mexico's Jemez Mountains, which are dotted with communities and laced with hiking and biking trails. The 300-acre fire was not yet threatening any homes or other structures in the area 60 miles north of Albuquerque, officials said.

"We're trying to get a handle on this fire and keep it small at this point," said Charlie Jankiewicz, a fire information officer with the Santa Fe National Forest.

New Mexico firefighters battled another fire that burned about 255 acres of private ranch land near Fort Union National Monument, said John Harrison, a spokesman for the state Forestry Division. He said the fire, which was sparked by lightning, was 10 percent contained late Monday.

Firefighters also were battling a number of lightning-sparked fires in the Gila National Forest.

In Alaska, a 36,500-acre fire southeast of Fairbanks continued burning south Monday toward cabins on the lower Goodpaster River. About 120 firefighters were trying to stop the blaze, which was sparked by lightning June 14.

In a remote area northwest of Fairbanks, another fire grew to 30,000 acres Monday, but it was being monitored, not fought.