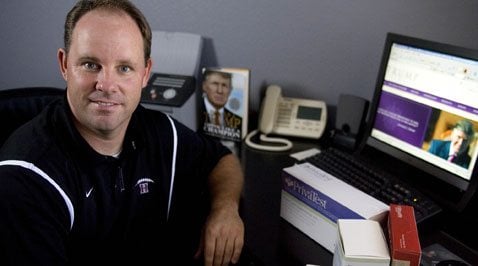 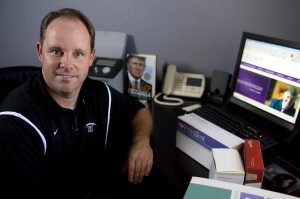 Or, more specifically, a vitamin supplement company that Trump recently acquired and renamed the “Trump Network.”

Johnston, a 14-year teaching veteran who works with “at-risk” students who are falling behind in school, has spent the last six weeks learning how to market and sell Trump’s product and trying to recruit other salesmen.

“I’ve never really gone out on a limb like this,” he said. “I’m learning quite a bit, never having sold anything before.”

He began looking for business opportunities to supplement his teacher’s wages when the Chandler Unified School District voted in April to freeze salaries for the upcoming school year, 2009-10, because of the state budget crunch.

The state is cutting millions in aid to the district for the next school year to help compensate for a potential $3.3 billion state revenue shortfall. Though the governor signed the education budget last week, district officials are still sorting out the final figures. District spokesman Terry Locke has said it could be October before a better picture is known.

Johnston said he and his wife, Cindy, a physical therapist, were hoping for a little more spending money so the family could do things like take a vacation once in a while.

“We were just tired of where we were, finally,” he said.

Johnston was recruited into the Trump Network by friend Michele Rogers. Rogers said that after she gave birth to her now 18-month-old child, she wasn’t inclined to return to her business management position with Banner Desert Medical Center.

She described the Trump Network as a “network marketing” company. People who participate are tasked with selling a customized vitamin supplement program and conducting their own individual marketing.

Essentially, the company, formerly called Ideal Health, conducts a urinalysis on each customer to gauge that person’s metabolism and vitamin deficiencies, and then creates a personalized supplement, she said.

“It’s trying to get your body, basically, back into balance,” Rogers said.

Product sellers make money in two ways: in commission on sales, and for recruiting other people to sell, she said. Rogers said she’s recruited about 30 people personally and now has a total of about 200 people on her ladder.

“With the Donald Trump name, people are more open to it,” she said.

The company ships the products directly to the customers, Rogers said.

“You don’t store any products. You don’t have to have inventory,” she said.

According to a flyer billed as “A note from Donald Trump,” containing the mogul’s photo and purported signature, Trump argues that his network marketing concept is headed for substantial growth and is a good opportunity in tough economic times.

“We’re in the midst of an economic meltdown created by Wall Street greed, financial industry ineptitude, and a multibillion-dollar government bailout of the financial system that isn’t working,” the flyer states. “The American dream has been hijacked by complacency and incompetence.”

Johnston said many of his apprehensions about the venture were allayed because of its association with Trump. He said he’s hoping to receive his first small check from the company by the end of the month.

“I think everybody right now is looking for a little extra income,” he said.