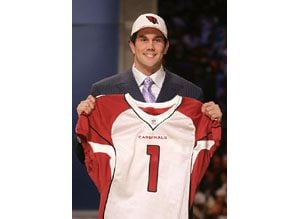 Matt Leinart, quarterback from Southern California, stands with a jersey after being selected by the Arizona Cardinals as the 10th overall selection during the first round of the NFL Draft, Saturday at Radio City Music Hall in New York.

Matt Leinart, quarterback from Southern California, stands with a jersey after being selected by the Arizona Cardinals as the 10th overall selection during the first round of the NFL Draft, Saturday at Radio City Music Hall in New York.

The Arizona Cardinals got their future quarterback in the first round of Saturday’s draft, after the perfect storm of events in the nine picks ahead of them dropped former Heisman Trophy winner Matt Leinart into their laps with the 10th selection. “We really look at this as a gift,” coach Dennis Green said.

Leinart, who would have been the first overall pick of the 2005 draft had he left the University of Southern California after his junior season, will be the heir apparent to incumbent starter Kurt Warner.

“I fell to Arizona for a reason,” Leinart said. “I think it’s a great situation for me.”

The Cardinals selected East Valley product Taitusi “Deuce” Lutui, a guard and Leinart’s teammate from USC, in the second round. The 6-foot-4, 334-pounder attended Mesa High and his family still lives there. An excellent run blocker, Lutui provides needed depth on the offensive line and could battle for a starting spot.

“We really feel like we have helped ourselves,” vice president of football operations Rod Graves said. “We’ve created good competition and good depth and we are happy with that.”

The team has four more picks Sunday, beginning with the fourth selection of the fourth round.

Leinart flew in to Phoenix Saturday and will be introduced to the local media in a press conference Sunday morning.

The Cards were expected to consider a quarterback in the first round, but they never thought Leinart would fall all the way to the 10th choice. But Tennessee selected Texas quarterback Vince Young third overall, and then Oakland, another team that might have picked a signal-caller, decided to take Texas safety Michael Huff.

When Buffalo made a surprise pick of Ohio State safety Donte Whitner and then Detroit took Florida State linebacker Ernie Sims, Leinart was there for the Cards.

Green and Graves said they had Leinart dropping to them in their final mock draft Friday night, so it wasn’t a complete shock to see Leinart there.

Leinart will sit for now. Green said he will compete with John Navarre, a 2004 seventh-round pick, for the backup role.

His arm strength is considered to be average, but Leinart dismissed his critics and insisted “there’s not a lot to prove.”

Warner called Graves after the pick to congratulate the team on the pick, and while he remains aware of the pressure for Leinart to get on the field, Warner is taking the team’s word that he will be the starter.

“We expect to win with with Kurt Warner this year,” Graves said.

Green made Leinart laugh when he talked to his newest player on the phone right before the pick was announced.

“I told him we were lucky,” Green said. “We feel lucky, we are excited about being lucky, that we were fortunate to get Edgerrin James, that we got Larry Fitzgerald and Anquan Boldin as receivers, we will improve our whole offense and that we think he will fit in perrfectly.

“It is short trip over the mountain from L.A. to Phoenix and we think (Leinart) couldn’t have ended up in a better place.”

There is significant debate over which of the top three quarterbacks will be the best pro, including Vanderbilt’s Jay Cutler. But most teams were believed to grade Leinart the highest of the trio. Leinart was believed to be third on the Cards’ board.

“I’m not that familiar with (the Cardinals),” Leinart said. “I was prepared (to drop), knowing all the different needs teams had, but I am so excited to be an Arizona Cardinal.”