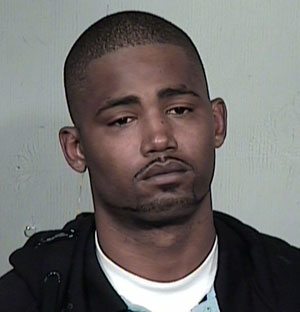 Police found one suspected pimp and four underage girls at the Homestead Suites Hotel near Dobson Road and U.S. 60.
1 of 2

Police found one suspected pimp and four underage girls at the Homestead Suites Hotel near Dobson Road and U.S. 60.

A teenaged girl fed up with life as a prostitute led police Thursday to a suspected pimp and three other girls operating out of a Mesa hotel.

Phoenix police arrested Deon Antawn Richerson, 25, of California, on suspicion of child prostitution and kidnapping. The officers placed all the girls into protective custody to be returned to their home states of California and Oregon, said Sgt. Joel Tranter, Phoenix police spokesman.

Tranter said the group arrived Tuesday from Las Vegas, where -- according to one of the girls -- Richerson complained that police were too vigilant.

Tranter wasn’t certain whether the prostitution ring came to the Valley to take advantage of major events such as the Fiesta Bowl, FBR Open and the Super Bowl.

“In all likelihood, that was in the mix,” Tranter said.

The arrests serve notice that a special task force will be in place beginning about two weeks before the Super Bowl to specifically address child prostitution, Tranter said.

Thursday’s arrests unfolded at 1 a.m. at 27th Avenue and McDowell Road, where a former vice cop on patrol saw a young girl standing on a street corner.

The officer developed a rapport with the girl and found out she was a runaway who just turned 15.

“She basically opened up to him,” Tranter said.

Maryvale Justice Court records indicate the girl ran away from a California group home on New Year's Eve with two other girls. She told police that Richerson sent a taxi to pick them up and bring them to his hotel room in California, where he had sex with at least one of the girls.

He then took the girls to Las Vegas and then to Phoenix. The 15-year-old told police that Richerson instructed her to lie about her age and give a false name if officers ever questioned her.

The girl told police she earned $350 as a prostitute on Tuesday and gave the money to Richerson, who worked with an unknown female. The girl worked again as a prostitute on Wednesday, and then told Richerson she wanted to return to her home in Oregon.

Court records indicate Richerson refused to let the girl leave. He "told her that he needs more money and needs to get on his feet prior to her going back home," the records state.

The girl said she secretly kept some money from her "johns" to buy a bus ticket home.

The girl told the patrol officer that her pimp was in the area and pointed out his vehicle, which officers pulled over on a traffic stop.

By 3 a.m., investigators were staking out two rooms at the Homestead Studio Suites Hotel, 1920 W. Isabella Ave. near Dobson Road and U.S. 60 in Mesa.

They are typically runaways or girls with unhappy home lives lured away by pimps — usually young men — who entice them with money, nice clothes and promises of a luxurious life.

They make the girls feel like part of a family, but Schemers said the pimps inevitably use threats and physical abuse to enslave the girls.

Police said the girls in Thursday’s bust were relieved — especially the oldest.

“You could see it in her eyes, it was like, ‘save me,’” Schemers said.

A judge set bond for Richerson at $22,000. He is scheduled to appear 8:30 a.m. Jan. 10 for a status conference in a Glendale courtroom. A preliminary hearing in the case is scheduled for Jan. 14.