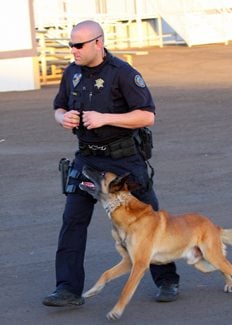 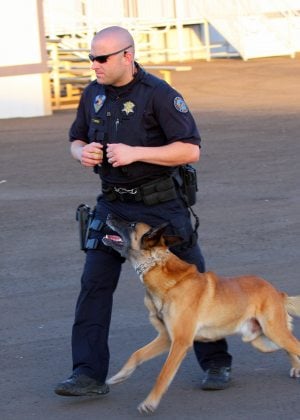 But despite drugs turning up only a few times, school and police officials say the program is a good deterrent for students.

The Scottsdale Unified School District governing board approved bringing police narcotics dogs to campuses for random locker searches in May 2005. Since then, the school district has scheduled 10 searches a year, two on each of the four high schools located in Scottsdale city limits and two at Sierra Vista Academy, the district's alternative school.

The program came in response to a high-profile report on a drug ring involving 146 Valley students, teens and young adults released by the Maricopa County Sheriff's Office earlier that year. Most of the people involved lived in Scottsdale.

The random searches generally involve an officer and a dog going to a school at 3 p.m., once school has let out for the day, said Scottsdale police Sgt. Chris Coffee, who is in charge of the department's K-9 unit. They meet school officials and then search a row of lockers designated by administrators.

While two searches per campus are penciled in a year, the actual number of checks depends on the department's scheduling, Coffee said.

Schools aren't charged for the service. The police department doesn't have a cost breakdown for the program because it doesn't charge for any services and schools are treated like any community member, said Sgt. Mark Clark, police spokesman.

During the 2007-08 school year, drug-sniffing dogs went into Scottsdale schools 11 times, according to police. While there were no arrests, drugs were found twice: marijuana in a sink drain at Sierra Vista Academy and something similar at Desert Mountain High School.

A Tribune review of records from the first two years of the program found there were eight random searches of Scottsdale schools over the 2006-07 school year.

In 2005-06, the first year of the program, there were nine random searches, none of which turned up drugs.

Outside of the random searches, narcotics dogs were called to Desert Mountain twice to inspect cars that administrators believed held marijuana in 2005-06. Both searches resulted in arrests.

A dog was also called to Sierra Vista Academy in 2006 to inspect a room where administrators believed a student had snorted cocaine. While the dog found a piece of foil that was believed to have been used for drugs, cocaine wasn't discovered. There was no arrest.

Milissa Sackos, the school district's executive director of student and community services, said she believed the program was working well.

While Sackos said she couldn't speak to a particular program on its own, she said everything combined, including school resource officer presence at schools, character-building curriculum and chemical awareness programs, affect student choices.

"We would like to believe it is our overarching preventative measures that are making an impact," Sackos said. "A single program in isolation I don't think can take credit for any type of decline for drug and alcohol possession."

And while school is out when the searches are conducted, there are still enough students on campus to create a buzz.

"It's a great deterrent when you bring a dog onto campus," Coffee said. "The students are excited, they want to know why the dog is there. And the student grapevine gets working."

Governing board president Karen Beckvar said the board didn't have any plans to review the program in the short term.

She said she's fine with keeping the searches as long as they remain free to the district.

"It doesn't seem to be causing any disruption on the campuses," Beckvar said. "I haven't heard any complaints and that's always a good sign."

When told the searches found drugs three times, Beckvar said the program still had a purpose.

"The value of it was not in search itself, but in the deterrent effect." Beckvar said.

"People don't want to get caught."