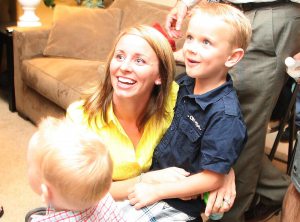 Jenn Daniels watches with her son, Ethan, as results come in from the Gilbert Town Council election. May 19, 2009. 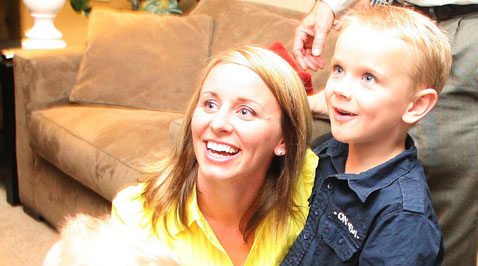 Jenn Daniels watches with her son, Ethan, as results come in from the Gilbert Town Council election. May 19, 2009.

Town Clerk Cathy Templeton said Friday the margin between Sentz and Krueger would have had to have been less than 10 votes to trigger a recount. The margin is 187 votes. Friday's vote totals included early ballots which were dropped off at the polls Tuesday rather than mailed in, plus provisional ballots for voters who had to come back with valid voter ID under state law.

Sentz, who led Krueger by 171 votes after Tuesday's preliminary results, said Friday evening after the figures came out, "The other night I said I was cautiously optimistic, and now I can say that I'm excited and ready to get to work."

The current council is now trying to figure out how to close a $12 million shortfall in next fiscal year's budget by cutting programs and staff, raising the sales tax, hiking user fees, or some combination of the three. It must be adopted before the year begins July 1.

Many of the key decisions for next year will likely be made before Sentz, Daniels and Mayor-elect John Lewis take office on June 16, but Sentz is ready to jump in with additional cost-saving measures, particularly looking at business development and permitting processes and fees.

"That shouldn't come as a surprise to anybody, since that's what I've been campaigning on all along," he said. Sentz has also come out in favor of the sales-tax increase, proposed by councilwoman Linda Abbott about two weeks before the election.

Earlier Friday, Krueger said she regretted not directly addressing allegations accusing her of fraud and doing the bidding of developers who contributed to her campaign, including the operators of the Big League Dreams ballpark.

Beyond that, she said, "My feeling is Jenn and Erin did something which I said all along somebody had to do and energize the sleeping giant, which is their demographic." Daniels, 30, and Scroggins, 36, positioned themselves as representative of the families with young children which have overtaken many of Gilbert's neighborhoods.

Krueger, 51, said not being on the council will allow her to focus more on her career as a business consultant.

Scroggins, who opposes any tax increase and ran a conservative campaign, said Friday he was very encouraged by gaining more than 2,000 votes from the primary to the general election, and is already planning another run in two years.

"In the meantime, we'll have two conservatives on the council with John Lewis and Jenn Daniels, and that's one more than we had before. Mayor (Steve) Berman was the only real conservative," he said.

In the mayor's race, Lewis maintained his commanding lead over write-in candidate Glen Spencer, with 13,652 votes to Spencer's 777. He and councilman Don Skousen topped Berman and three other candidates in the primary, and Skousen withdrew from this week's runoff, citing family health concerns.