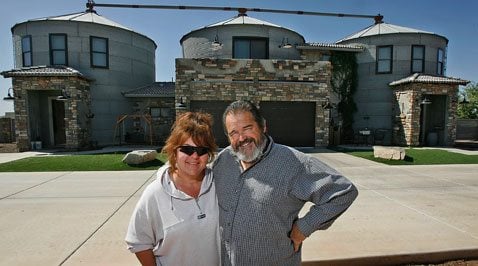 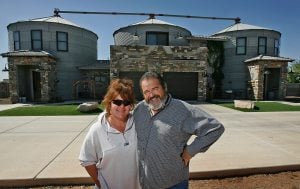 Don and Carolyn Riedlinger aren't celebrities, but the couple still live behind a locked gate to keep the public away. "We have to keep it shut or they drive in," Carolyn said. "Now they just take pictures."

Don and Carolyn Riedlinger aren't celebrities, but the couple still live behind a locked gate to keep the public away.

"We have to keep it shut or they drive in," Carolyn said. "Now they just take pictures."

It's no wonder the Gilbert couple are the focus of so much interest in their community. They live in grain silos.

In November 2006, after about 10 months of work, the couple finished converting three old silos from a Gilbert farm at Queen Creek and Gilbert roads into what they and their daughter, Micah, call home.

Don Riedlinger said that the silos were so wide, he had to split them in half and transport them overnight to their destination on Pecos Road, between Lindsay Road and Val Vista Drive.

While such a feat might impress most couch potatoes, it wasn't their first time moving such massive structures. The couple bought Shenandhoah Mill in 1997 and moved it from Hinton, Va. It was turned into a wedding venue in Gilbert on Gilbert Road, north of Ray Road.

For such unusual homes, the Riedlinger's silos feature some relatively mundane features such as stone facades, smart-framed windows and IKEA cabinets.

After moving in, the couple said an onslaught of curious passers-by began knocking on their door.

He estimated that they spent as much as $350,000 to make separate living quarters for themselves and their daughter and her husband, Spencer Carling.

A center garage and upstairs game room conjoin the three silos. The couple occupies the center silo and westernmost silo. Micah and her husband live in the easternmost silo.

Don explained that the couple just are not the "mainstream, cookie-cutter house people."

Jay Thompson of Gilbert-based Thompson Realty said that if the Riedlingers ever choose to sell their home, they may be up for a big challenge.

Thompson said the first problem would come when trying to put a value on the houses. Another challenge would be finding a buyer.

"I would have to advise them that their buyer pool is going to be really, really small," he said.

Still, Thompson said selling a home like the Riedlingers silos would be a challenge he'd relish as a real estate agent.

"I'm sure that somebody somewhere would go, 'Wow that's pretty cool,'" he said.