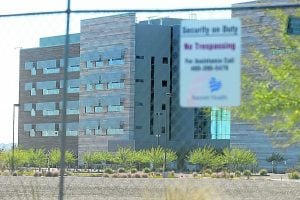 Banner Ironwood Medical Center sits in an unincorporated area of Pinal County known as San Tan Valley but could be annexed into neighboring Queen Creek. 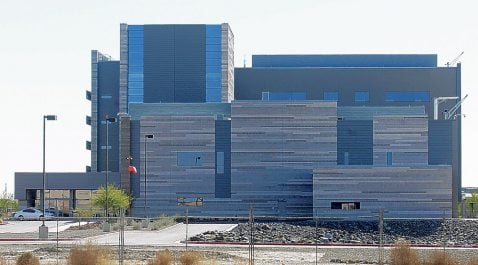 Banner Ironwood Medical Center sits in an unincorporated area of Pinal County known as San Tan Valley but could be annexed into neighboring Queen Creek.

Banner Ironwood Medical Center, the first hospital to serve the Queen Creek and San Tan Valley area, is set to open Nov. 1. But another question remains: whether the facility will remain in unincorporated Pinal County or be annexed into neighboring Queen Creek.

While the opening date is now known - the hospital was originally supposed to open in late 2009, but that plan was delayed due to the economy - another question remains: whether the facility will remain in unincorporated Pinal County or be annexed into neighboring Queen Creek.

Pinal County Supervisor Bryan Martyn said he was "ecstatic" that Banner has set the date for opening the new hospital at Gantzel and Combs roads. Queen Creek officials and San Tan Valley residents were similarly glad a hospital is coming.

But more than having an area hospital, both communities also want the facility to boast their address. And, in turn, their revenue.

"Part of economic development is marketing your assets within your town limits to the greater community," Queen Creek Town Manager John Kross said.

Queen Creek estimated in April 2008 the hospital and a Fry's shopping center next to the facility, which would also have to be annexed, would generate $21 million in sales tax revenue over the next 20 years if they were moved into town limits. That figure doesn't include construction taxes or money brought in from businesses locating near the facility.

Queen Creek officials believe the figures may be outdated and want to do a new, more detailed analysis.

Banner Ironwood spokeswoman Susan Gordon said the nonprofit doesn't have an estimate on the hospital's financial impact to the area. She did say it will open with 200 employees, primarily in the medical field. Medical offices around the facility would likely create another 100 jobs, she said.

Queen Creek has discussed annexation with Banner and is working toward that goal. The town annexed land near the hospital site in September 2008 but hasn't annexed the hospital itself.

While the site isn't in Queen Creek, it's been in the town's planning area and has been listed on the voter-approved general plan since 1996, Kross said. Queen Creek has also worked to bringhealth and wellness industries to town for a few years, he said.

"Annexation in the state of Arizona really favors the property owner," Kross said. "It's largely the call of the property owner whether they want to annex into a city or town, and more than a year ago Banner expressed interest in annexing into Queen Creek."

Some residents would like the hospital to keep its current address for much the same reasons Queen Creek wants it.

And that, in turn, could aid the incorporation effort, Motlok said.

Similarly, Motlok would like to see any sales tax generated from nearby businesses to stay with San Tan Valley.

"They're not going to annex it into Queen Creek and say, 'You go ahead and take the tax dollars,'" she said.

San Tan Valley resident Fadi Elias said the hospital was a selling point that convinced him to move to the community in 2008. Even though he doesn't believe the nonprofit hospital would add much to the tax base, Elias believes it could attract businesses that would.

"It could be the start to a lot of good things in the city," Elias said.

Hospital officials are still evaluating whether it should annex into Queen Creek or stick with a San Tan Valley address, Gordon said. There's no timeline for making a decision.

One big issue has to do with impact fees, the money developers pay to accommodate growth.

The second phase of the Banner Ironwood site is supposed to include medical offices to rent out to private physicians and medical providers. Currently, impact fees for those offices would be less in Queen Creek than in unincorporated Pinal County, Gordon said.

There's a possibility that could change. The Pinal County Board of Supervisors later this month is scheduled to discuss a new impact fee structure that doesn't affect medical facilities so severely, Martyn said.

A specific fee structure isn't available yet, so it's impossible to know whether a new Pinal fee structure would be less than Queen Creek's fees.

But San Tan Valley residents are taking note. Motlok is collecting signatures encouraging the supervisors to revamp the impact fee structure and entice Banner Ironwood to keep its address. She usually collects signatures Saturday mornings at the Vendor's Mart at Ocotillo and Gantzel roads and has collected 250 signatures so far.

Martyn said he's in favor of revamping the impact fees but doesn't have a position on whether the hospital is in Queen Creek or San Tan Valley because the hospital would remain in Pinal County either way.

And while the address affects which area will be able to advertise having a hospital in the community, businesses will still locate nearby, he said.

"The other community will have to say we have a hospital a half a mile from our borders, or in this case, 100 yards," Martyn said.

The $128 million first phase of the hospital will open with 36 beds, four surgical suites, medical-imaging services, four delivery rooms and two Caesarean section suites. A third of the beds will be dedicated to surgical care, a third to obstetrics and the remainder to general and intensive care.

The initial tower will eventually accommodate 86 beds, and the entire hospital is expected to have 500 beds at build-out.

There is not a planned schedule for expansion, Gordon said.

Banner also named a CEO for the facility Wednesday: Deb Krmpotic, who was most recently the chief nursing officer at Banner Baywood in Mesa. She has also served as the CEO at two former Banner facilities in North and South Dakota.