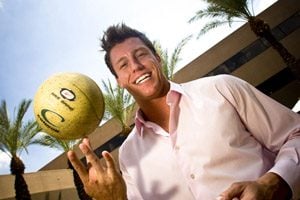 Lucas James has two claims to fame. His full name is Lucas James Joyce; his great-great-grandfather, James Joyce, was an Irish expatriate writer best known for his novels “Ulysses” in 1922 and “Finnegans Wake” in 1939.

James was also a body double for Phoenix Suns’ star Steve Nash in a Nike shoe commercial shot this spring.

“We’re the same height,” said the 6-foot-4-inch Scottsdale resident. “It was shot during the season and they could only use him for two hours. They wanted me for a lot longer than that. All they needed was from my neck down.”

James, an actor, model and host of “Arizona Entertainment Weekly” on KPHO-TV (Channel 5), spent two eight-hour days filming at a former high school gym in the Valley. The 26-year-old worked in sales and marketing for the Suns and WNBA Phoenix Mercury after relocating to Scottsdale in 2004 from Minnesota.

Having played basketball at Bemidji State University in Minnesota gave him a leg up on competition. James is a client of the Leighton Agency of Scottsdale, the firm that got him the Nike shoot. He earned $5,000 for the project.

“I must have done a crossover 1,000 times,” James said of a basketball maneuver where a player feints to sucker a defender into committing his forward momentum in the same direction and then lunges for free space. “They wanted to be sure the shoe was just right so the word Nike could be seen. The Nike reps were there. You and I may think that it looks good one way but the angles have to be just right. It was very different.”

James, who first met Nash when James worked for the team, said the two-time NBA most valuable player was easy to work with and cordial on the set.

“I did his moves for a day, then he came in and did them,” James said. “He’s such a pro. He made everything look like a piece of cake.”

James has also done fitness and fashion modeling for companies such as Bahama Breeze, Hewlett-Packard and the Pointe South Mountain Resort.

The catalyst for his trying to get into modeling was a suggestion from a woman he knew. James also works in business development for a Valley title company.

“I want to continue as a TV host and eventually have my own syndicated entertainment show,” James said. “Phoenix is a good market because we’re getting more and more movies and I can try to act in them. I’d eventually like to wind up in Los Angeles. People move to L.A. with no representation or experience. I have both. I’d like to wind up in L.A. in the next three years. That would be good progress for my career.”