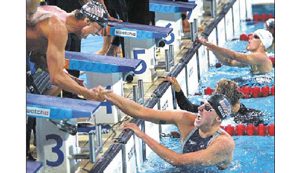 Normally, Erica Jones would be quite upset to have her prime time, tape-delayed Olympics television coverage ruined by someone telling her the results.

But when Jones — the Arcadia High swim coach — was told Tuesday afternoon one of her prize former pupils, Klete Keller, had just won a gold medal, she couldn't hide her elation.

Keller swam the anchor Tuesday on the United State's winning 4x200 meter freestyle relay, narrowly edging Australia's Ian Thorpe in a race Keller said ‘‘will go down as one of the greatest in history.’’

His excitement was very nearly matched by his high school coach.

"I think it's awesome," said Jones, who coached Keller in his senior year at Arcadia in the Scottsdale Unified School District.

"He definitely deserves it. He's given up a lot the last four years. It has been his main focus, so that's awesome. I'm very excited."

As Jones watched over the Arcadia swim team working out at Chaparral Pool in Scottsdale, she explained how inspiring Keller is to the Titans. Keller also medaled in the 2000 Olympics.

After high school, Keller went to swim at the University of Southern California, but left in 2002 because he said he had lost his focus. He turned pro and called Michigan swim coach Jon Urbanchek, who invited him to Ann Arbor to train.

A warm-weather fanatic, Keller said it was tough to grow accustomed to Michigan winters. Two weeks ago, his mother and girlfriend packed up his belongings from his apartment in Ann Arbor and drove them to Arizona. Keller has enrolled for classes at Scottsdale Community College.

Having Keller back as a resident Olympic hero will be an inspiration, Jones said.

"I think it does help a lot," said Jones, who also coached Keller's younger sister, Kalyn — also on this year's Olympic team. "On the bus ride here, I was talking about how four years ago, we were at our regional dinner when Kalyn was a sophomore. We had the regional dinner at her house and her brother had just gotten back from the Olympics, so we pulled out his medals and got to look at them. It really is very inspiring. Just to have someone who went to your high school to relate to I think it really is good."

While Arcadia can claim film director Steven Spielberg among its famous alumni, Jones said Keller's performance Tuesday puts him atop the list.

- Jo-Ann Barnas of the Detroit Free Press contributed to this report.