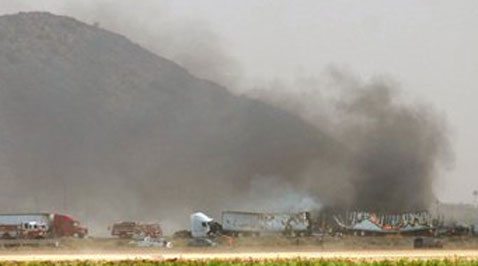 A multiple-vehicle collision caused by blowing dust is seen on Interstate 10 near Kortsen Road in Casa Grande. A sudden dust storm has spawned 20 or more collisions Tuesday on Interstate 10 in central Arizona, with several vehicles catching fire. Dec. 22, 2009

A multiple-vehicle collision caused by blowing dust is seen on Interstate 10 near Kortsen Road in Casa Grande. A sudden dust storm has spawned 20 or more collisions Tuesday on Interstate 10 in central Arizona, with several vehicles catching fire. Dec. 22, 2009

Three people are dead and five more were seriously injured and taken to hospitals after at least 20 collisions took place during a heavy dust storm Tuesday morning on Interstate 10 near Casa Grande.

Arizona Department of Public Safety said it is still unknown how many vehicles were involved or how many people were injured.

DPS shut down the interstate’s eastbound lanes, about 10 miles north of Casa Grande. It is expected to be closed until 9 p.m. Recent reports say visibility is still poor and motorists are asked to avoid the area for several hours.

A DPS hazardous materials unit headed to the scene after word came in that a “commercial vehicle has exploded.”

In addition, DPS is asking drivers to be cautious on I-10 at milepost 67, about 60 miles east of California, because of high winds, dust and other storm-related activity.

In northern Arizona, DPS officers are investigating more than 20 collisions and assisting with more than 50 vehicles that slid off slippery roads thanks to at least 4 inches of snow that had fallen as of 3 p.m.

Interstate 40 near Williams is closed in both directions near Ashfork Hill following an injury collision. Another problem area for snowfall was Interstate 17 about 25 miles south of Flagstaff.

A cold front is moving into Arizona from California. The National Weather Service has issued a dust storm warning for several areas across Arizona, including southwest Maricopa County and northern Pinal County along I-10 between Casa Grande and Chandler. The dust storm warning is in place until 5 p.m. and a wind advisory is in place until midnight.

Check back to evtrib.com as more information is available.