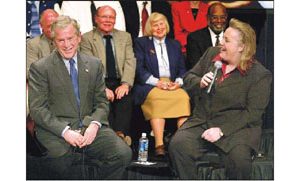 President Bush shares a laugh Wednesday with Stacey Leedom of Tempe as she talks about her education at Mesa Community College.

President Bush shares a laugh Wednesday with Stacey Leedom of Tempe as she talks about her education at Mesa Community College.

High-tech training centers such as the showpiece program at Mesa Community College are essential for teaching workers the skills needed to thrive in America’s changing economy, President Bush said Wednesday during a forum on the campus.

Bush also called on Congress to allocate $250 million for job training programs at community colleges, calling them the most effective way to retrain people who have lost work in declining industries.

"That’s what’s happening here in America. And that’s why it’s essential that these kinds of programs that we are talking about provide willing souls with the skills necessary to take advantage of it."

While the president made brief remarks to open the 35-minute event, he spent most of that time getting an explanation of the information technology and job-training programs at MCC, and listening to the success stories of three students who were retrained through the college’s Business and Industry Institute.

Stacey Leedom of Tempe, a single mother who told the president her story of being retrained at MCC for a well-paying technical job, said she was nervous about meeting him. But she was quickly put at ease by the president’s demeanor, she said.

"It was actually very incredible," Leedom said. "In the end he made it much easier because you could talk to him. He’s very easy to talk to."

Bush’s stop in Mesa is part of a three-state tour, which includes Ohio and New Mexico, that he launched after delivering his State of the Union address Tuesday. The president stayed the night in Phoenix and was expected to leave for New Mexico this morning.

The event at MCC is Bush’s second trip to Mesa since taking office and his seventh visit to the state.

The nation’s economy is rebounding after struggling through the turmoil of recession, terrorist attacks and war, Bush said. The types of jobs that are in growing demand require skilled workers in technical fields, he said. What is important about the program at MCC is that it was developed in close cooperation with industries that will eventually be hiring graduates, Bush said.

"As technologies change, often times people can be left behind," Bush said. "And we’ve got to address this straight on. One of the greatest places to address that phenomenon is at the community college system."

While most economic indicators show a strong economic recovery is under way, job growth has remained stagnant, according to U.S. Department of Labor figures. The national unemployment rate in December was 5.7 percent. Only 1,000 new jobs were created nationally last month, according to the Labor Department.

While most of Bush’s stop in Mesa was to spotlight job training programs, he also urged Congress to adopt the immigration reform bill he has proposed to address the bottom rung of the economy.

As the changing economy is creating more demand for well-trained workers, unskilled jobs are going unfilled, Bush said. The immigration reform legislation he has pitched to Congress would create a guest worker program to allow illegal immigrants currently in this country to obtain temporary work permits for certain industries. That would allow them to legally fill the low paying jobs that Americans will not take, yet would not reward them with citizenship or amnesty, Bush said.

"They are coming to make a living and they are filling jobs that, frankly, others won’t do," Bush said. "It seems like to me that we’d ought to have a policy that is open and honest about this phenomenon. It’s a policy that, in my judgment, should say where there’s a willing worker and a willing employer, those two ought to be matched up together in a legal way so long as the employer can’t find an American to do the job."

East Valley congressional representatives who attended the president’s event said they had not seen details of his $250 million pitch for community colleges, so could not comment on whether they would support it. Reps. Jeff Flake and J.D. Hayworth, both R-Ariz., have both been critical of federal spending growth since Bush took office.

"The president makes a case, and the Maricopa County system of community colleges makes a very strong case, for job training, for the chance to reassess career status and embrace the opportunity," Hayworth said. "It’s something that’s a worthy endeavor."

Hayworth and Flake split on the president’s immigration reform bill. Flake last year proposed legislation similar to what the president is seeking. Hayworth disagrees with the president’s approach, saying better enforcement of existing laws is needed before guest worker programs should be enacted.