Skip to main content
You are the owner of this article.
Edit Article Add New Article
You have permission to edit this article.
Edit
Home
The Mesa Tribune
Scottsdale Progress
The Chandler Arizonan
Gilbert Sun News
Queen Creek Tribune
Sports
More
1 of 3 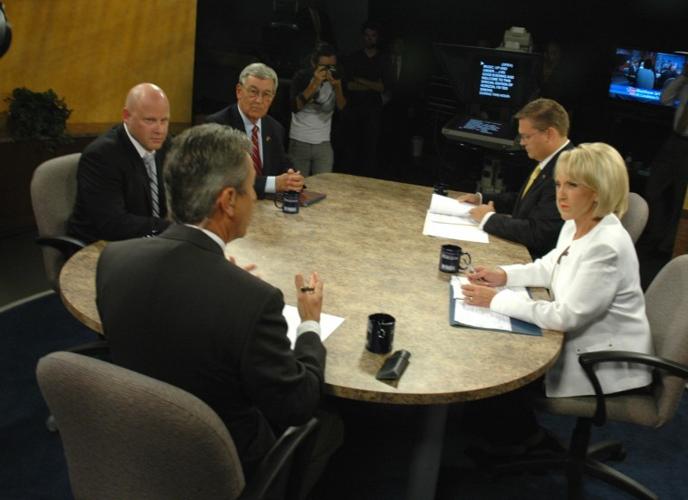 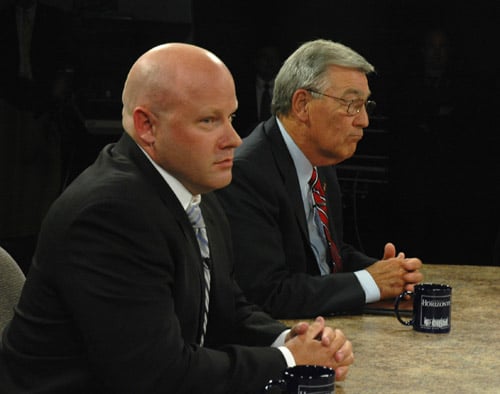 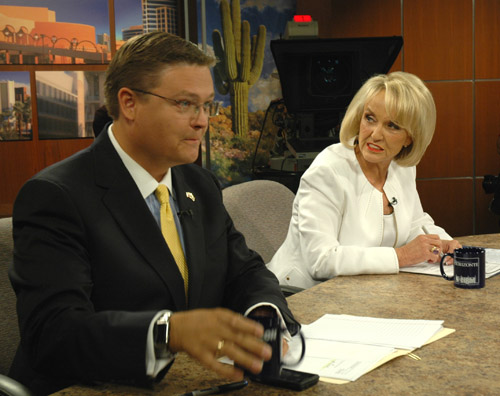 Dean Martin and Jan Brewer take part in a debate for GOP gubernatorial candidates June 15, 2010.
1 of 3

In an often-testy exchange at their first real debate, the four Republicans lobbed charges at each other, saying their foes do not have a realistic view of the problems of the state or realistic solutions. And three of the four each touted records as fiscal conservatives.

That left only Matthew Jette to argue that it's not realistic to continue to cut spending at the expense of education and health care.

During the one-hour debate sponsored by the Citizens Clean Elections Commission, Jette lined up with Brewer in support of the temporary one-cent hike in state sales taxes that voters approved last month. Both said the state's fiscal situation -- one Brewer kept saying she inherited from predecessor Janet Napolitano -- left no other choice than to raise $1 billion a year for the next three years.

Mills, however, said it's a lie to say the tax hike was approved overwhelmingly. He said that two-thirds margin of support is undermined by the fact that just a third of Arizonans actually voted, which he said means fewer than 25 percent of registered voters wanted higher taxes.

And he said the tax hike would not have been necessary had Brewer cut spending.

"The economic policies of your administration are going to keep us in this recession, longer, wider and deeper,'' Mills said to Brewer. "We have got to stop this train now before we run off the cliff.''

The governor shot back that Mills never has told voters exactly how he would balance the budget.

"Where would you make those cuts?'' she asked, saying there are "certain mandates, not only from the federal government but from the voters.''

Mills conceded he has no such plan.

"You actually had school districts making up lists of teachers that were going to be fired'' if Proposition 100 went down to defeat. He said that was designed to "scare (voters) to death.''

"They loaded a very real gun and pointed it at our education system,'' Martin said. "That's the last thing you should have been reducing, not the first thing.''

Brewer, however, took her own shots at proposals for deeper spending cuts on education, saying funding has been "pretty much cut to the bone.''

"When we talk about 'waste' and 'mismanagement' and 'fraud,' those are easy words to throw out,'' the governor said. "That's not a solution.''

She also singled out Martin for special attack, saying his record as a legislator shows he's not the fiscal conservative he claims.

"You were part of the problem,'' she said.

"You voted for getting money out of the 'rainy day fund,' '' Brewer told Martin. "You voted for three out of four of Gov. Napolitano's spending budget.''

Martin, like Mills, also has not produced a specific plan to balance the budget. Instead, he said the state should cut its spending back to 2005 levels, matching the amount of money coming in, and deal with growth in school and health care enrollment by refinancing the state's existing debt.

Pressed for specifics, Martin said the state could save money by cutting administrative expenses for education.

"Less than 30 percent of the money actually spent in education actually goes into the classroom,'' he said.

But the Auditor General's Office, which studies the situation annually, reported in February that 56.9 percent of every dollar spent on education actually goes to instruction. And that figure does not include what is spent on librarians, nurses and guidance counselors.

Martin said the solution is less state regulation, saying there are more Arizona laws on how to teach than there are on nuclear power.

"That just shows you probably yourself need more education,'' Jette shot back. He said nuclear power plants are regulated not by the state but by the federal government.

"You cannot compare the two,'' he said.

All but Jette were in support of SB 1070 which requires police to check the immigration status of those they stop if there is reason to suspect they are in this country illegally. It also makes being an illegal immigrant a state crime.

Jette said the legislation is based on a misconception.

"You act as if the state of Arizona is being terrorized by illegal immigrants,''

"It is,'' Mills interjected.

"Crime is on the way down,'' Jette continued.

"Go to the border,'' Mills responded.

Brewer sided with Mills on this issue -- and not only because people break the law by coming into this country illegally in the first place.

Which GOP candidate for governor had the best showing in Tuesday night's debate?

To hear the candidates describe it, the Republican race for attorney general is a choice between a con man who is barred for life from securit…

The Arizona Gubernatorial Candidates debate on Televised was very lively, it also touched on Prop 100, immigration and SB 1070.

"Which GOP candidate for governor had the best showing in Tuesday night's debate?" Governor Jan Brewer for sure.

"We have passed the law, signed it and defended it, so we can do the job the feds aren't doing," said Brewer.

Jan has already proven to me that she thinks of AZ citizens first. As long as she stays in that corner, I'll support her with my vote....

Our Warrior Princess, Jan Brewer, dispatched both Martin and Mills for the clowns that they are. She also took our clown president, Barack O'Bonehead to the woodshed for his lack of leadership. She's got my vote for eternity. Way to go, Jan.