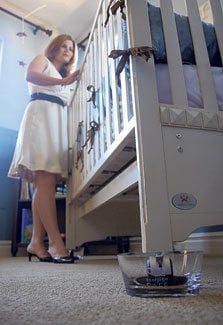 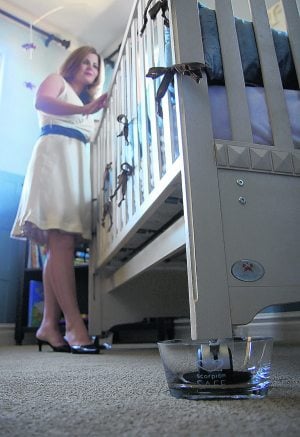 The Scorpion Safe glass shield keeps the critters from climbing up the legs of beds and cribs. Emily Simons, mother of two, is the founder of the company.

The Scorpion Safe glass shield keeps the critters from climbing up the legs of beds and cribs. Emily Simons, mother of two, is the founder of the company.

Emily Simons brought her newborn baby home from the hospital two years ago and was about to put him in his crib when she saw something that gives most people the willies just thinking about.

It was a bark scorpion — one of the most poisonous and common species of scorpions in Arizona — and it was right next to Carter’s crib.

“I couldn’t sleep for many nights,” the Scottsdale mom said.

The scorpion didn’t just give Simons a sudden jolt of anxiety. It also gave her an idea for a product that she and her sister, Sarah Besikof, began selling about a month ago.

Simons said she’s sold about 400 sets of scorpion shields — glass bowls that fit under the legs of furniture, beds or cribs.

“It’s exploded,” she said of sales. The shields, which are designed to withstand the weight of a large piece of furniture, cost $39.99 for a set of four. Simons and Besikof recently reached an agreement with a major retail chain — USA Baby — which will distribute their product in its 42 stores nationwide. Currently, the women sell the product via their Web site, www.scorpionsafe.com.

Developing the product took two years, Simons said. The process was a team effort. Besikof, a lawyer, handled acquiring a patent, while Simons found a factory in China to produce the shields and a center to package them.

“I’ve always been a very fearless person,” she said. “I’m not afraid of failure. I just went for it.”

Simons said she gets most of her business from Arizonans living in many of the state’s burgeoning suburbs where construction work is disturbing the arthropod’s natural habitat.

“They just keep unearthing them,” she said.

About 40 to 60 species of scorpions live in the state, according to the University of Arizona.

Daniel Brooks, a medical director at the Banner Poison Control Center, said his 24-hour emergency line gets 10 to 15 calls a day from people who have been stung. The biggest threats are to babies and elderly people, but that’s typically because the individuals didn’t get medical care.

Brooks said that scorpions are extremely adept climbers, but clean glass without any cracks, flaws or seams can prevent scorpions from climbing furniture. Still, nothing is 100 percent effective, he added.

“Unfortunately, scorpions climb up walls and get on the ceiling and fall down off the ceiling,” he said.