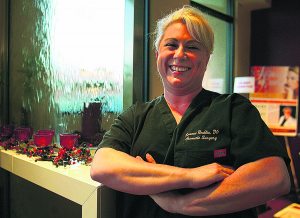 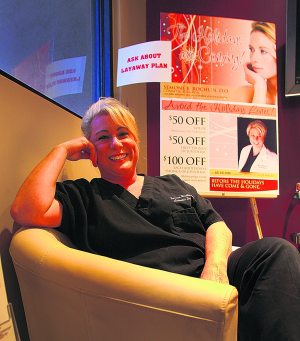 SERVICE: Dr. Semone Rochlin has started a unique financial plan to help her clients build up enough money for cosmetic treatment. Each patient makes a $1,000 down payment, then makes regular monthly payments until they reach the total amount needed.

SERVICE: Dr. Semone Rochlin has started a unique financial plan to help her clients build up enough money for cosmetic treatment. Each patient makes a $1,000 down payment, then makes regular monthly payments until they reach the total amount needed.

Scottsdale cosmetic surgeon Semone Rochlin is offering patients a unique plan to help them cope with the economic crisis and the difficulty of getting loans for treatments such as tummy tucks, facial Botox injections and breast augmentation.

She calls it a "layaway plan for budgeted beauty."

The plan allows her patients to make a $1,000 down payment, then add monthly installments until they reach the total amount needed for the procedure. The initial deposit is nonrefundable, but the monthly payments are given back if the surgery is canceled.

Major cosmetic treatments can range in price from a minimum of $4,000 to as much as $17,000 and are not covered by health insurance plans.

"I call it a savings account for my patients," said Rochlin, 42. "Offering a payment solution where no credit is needed is a financially sensible alternative in today's market. It's my answer to the economic recession."

She said it's the only financial plan of its kind for cosmetic and reconstructive surgery in the Valley. Rochlin, a physician for 10 years, opened her Scottsdale clinic a year ago. She also has one in Gilbert.

Many consumers are re-evaluating their cosmetic surgery plans in a time of recession, according to the American Society of Plastic Surgeons, which represents more than 6,700 physicians.

"It appears more consumers are choosing the less invasive cosmetic procedures because of the economic downturn," said Richard D'Amico, the society's president.

"It is very clear the economy is affecting the demand for surgical cosmetic procedures," said D'Amico. "We're hearing that from consumers and plastic surgeons."

The weak economy hasn't curtailed demand for Botox injections, according to the society.

Most women - and men - who undergo appearance-enhancing treatments such as Botox injections are continuing to spend money to maintain the regimen, said the survey of plastic surgeons. The national average cost for a Botox treatment is $501, the survey noted.

"In today's economy, we are thrilled that our business continues to grow," said Trish Gulbranson, owner of Derma Health Institute with sites in Mesa, Chandler and Ahwatukee Foothills.

"Even in the downturned marketplace, patients are visiting our offices for procedures like Botox an average of 2.9 times a year compared to the national average of 1.3 times," said Gulbranson.

On the other hand, the society's survey found a steep drop in demand for major plastic surgeries including breast augmentation and nose reshaping.

Some lending agencies that provide loans for cosmetic surgery are also struggling.

"Some lenders have gone under, others are tightening credit, but still others are doing fine despite the market," said Kelly Schnarr, account manager for Surgery Loans, a lending agency headquartered in Irvine, Calif.

Schnarr, whose company has made loans for some of Rochlin's patients, said her program can be successful.