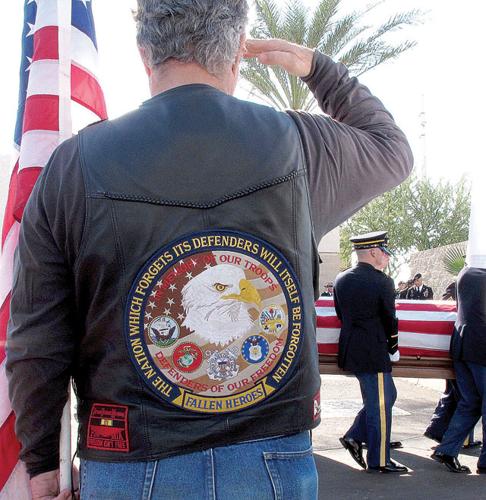 A member of the Arizona Patriot Guard salutes while the Arizona National Guard pallbearers carry Army Staff Sgt. Jason Reeves to the hearse before being taken for burial at the National Memorial Cemetery of Arizona in Phoenix Saturday. 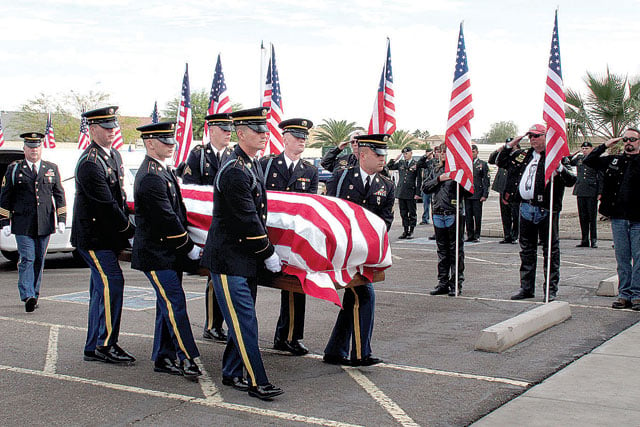 A member of the Arizona Patriot Guard salutes while the Arizona National Guard pallbearers carry Army Staff Sgt. Jason Reeves to the hearse before being taken for burial at the National Memorial Cemetery of Arizona in Phoenix Saturday.

The Sun City West Christian Church was filled Saturday with the sound of laughter and sorrow, with teary eyes and smiling faces, as friends and loved ones came together to mourn the death and celebrate the life of Army Staff Sgt. Jason Reeves.

Reeves, who attended Peoria High School and whose grandparents live in Sun City West, was killed in action in the Paktia Province of Afghanistan Dec. 5. He was 32.

Yet despite the tragedy of his dying so young, Saturday was as much about fond remembrance as tearful goodbyes. Reeves’ mother, Ruthie Reeves, joked he was preparing for a military career almost since the day he was born.

“The way he played with LEGOs, the way he fell out of trees,” she said. “I think he was preparing for skydiving.”

Ruthie Reeves said her son had a knack for dealing with adversity and an admirable sense of adventure.

“I want to thank every one of you for the part you played in his life,” she said. “Jason will not be forgotten.”

Sgt. Maj. Andy Anderson was on hand to represent the special forces unit Reeves was working with at the time of his death. Anderson read statements from several of the men who worked directly with Reeves. He said Reeves made himself an asset as soon as he arrived.

“But when a guy is accepted into our team he is one of us forever,” he said.

Anderson said he was honored to share his thoughts on Reeves, the man and the soldier.

“I am humbled,” Anderson said. “Jason is a hero to special forces. Everyone needs to know that.”

Wayne Dykstra, the minister who oversaw the proceedings, said those close to Reeves can take solace in knowing he died doing what was important to him.

“Is there anything more ironic than the life of a soldier? They love America, so they spend long months in foreign lands,” he said. “They love freedom, so they sacrifice their own. They value life, yet they so bravely endanger their own lives in service to their country.”

Dykstra said Reeves’ loved ones had much of the same things to say about him.

“He was a remarkable man,” Dykstra said. “He was a man who made an impact on this world. He held himself and others to a high standard, and he genuinely cared about the people around him.”

Brig. Gen. Jennifer Napper represented the Army command at the service. Napper said the Army has been deeply affected by the loss of Reeves.

Napper said Reeves had a reputation as a non-commissioned officer who was dedicated to the education of the men and women coming in behind him.

“He decided to dedicate his life to training young soldiers,” she said. “That selfless service is just the type of person he was.”

Napper said Reeves quickly grew close to everyone with whom he served.

“He was everyone’s brother,” she said. “He served more generously and cared more deeply than anyone can ask of a person. Jason Reeves showed us what is good and right about our country.”

Napper presented Reeves’ father, David, with his son’s posthumously awarded Bronze Star and Purple Heart. After reading the citation, Napper said everyone who knew Reeves should take pride in that fact.

“Nothing I say today will take away the pain, but I do want you to leave here today knowing that Staff Sgt. Jason Reeves was an American hero,” she said. “He will not be forgotten.”