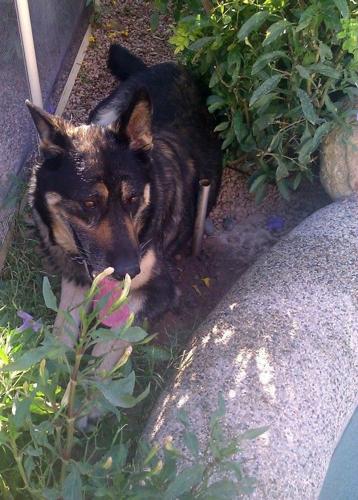 Erin Kaestle was given two German Shepherds earlier this summer after they were found abandoned and tied to a tree without food or water in Show Low, Ariz.

Kaestle, owner of AZ Pound Pups, immediately took in the pair of dogs and began fostering them from her Phoenix home.

“They were skin and bones,” said Kaestle, of the dogs when they were brought down to Phoenix.

Since their rescue, Duke, 8, and Lady, 6, have gotten healthier, and have a knack for finding their way into anyone’s heart.

“They are precious and we want them to go together,” said Kaestle, of the inseparable pair.

Duke and Lady, who were likely breeding mates, whine and howl if they are ever separated.

Admitting that the dogs were quite skittish at first and afraid to go indoors, Kaestle said Duke and Lady are now complete homebodies, who love spending their time keeping Kaestle company.

Duke and Lady’s adoption fee is $17. The pure-bred shepherds are already vaccinated, de-wormed, spayed and neutered, and vetted.

While Duke is great with all people, kids, cats and other dogs, he does suffer from mild arthritis. Lady is great with most dogs and all cats.

Lady’s back is a little bit bothersome for her, as she likely had many litters, Kaestle said. She is also prone to ear infections in one of her ears.

“Other than that, they are perfect,” Kaestle added.

AZ Pound Pups started six months ago, when Kaestle decided to open up her own rescue after working for local rescues.

Kaestle has been working with rescues and shelters for 11 years, and also works part time as a nurse.

Her group mostly rescues animals on the euthanasia list at Maricopa County Animal Care and Control (MCACC) and fosters them.

Some of the animals at MCACC are euthanized due to lack of resources and homes.

“(The county) is doing the best they can do with the amount of funding given to them,” Kaestle said.

When it comes to adoptions at AZ Pound Pups, Kaestle said there has been success when people find out the animals come from home environments.

It makes a difference for people to see the dogs already in a home, rather than at the pound.

AZ Pound Pups is fully run by volunteers and has a list of dogs available for adoption on its website, azpoundpups.org.

“It’s about re-homing dogs that no one wanted,” Kaestle added.

Duke and Lady serve as tangible examples of dogs that “no one wanted.”

Coming all the way down from northern Arizona, rescued from their choke chains, and given a temporary home at AZ Pound Pups, Kaestle said she just hopes someone in the area can give them a permanent home.

“I would drive them anywhere to a good home,” Kaestle added.

For more information on how to adopt Duke and Lady, email AZ Pound Pups at info@azpoundpups.org.

To learn more about AZ Pound Pups and to view their full list of adoptable dogs, visit azpoundpups.org.

Good Samaritans, common do-gooders, and all around decent people still exist. Willing to lend a helping hand and kind gesture, those small act…

Ahwatukee actors ring in the start of theater season

Maricopa urging insured to have children get vaccines from family doctors