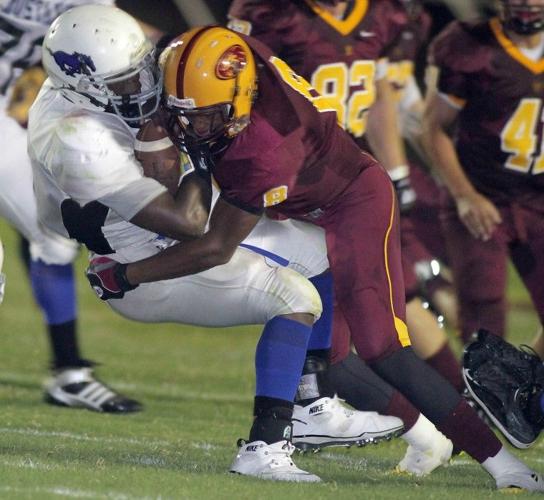 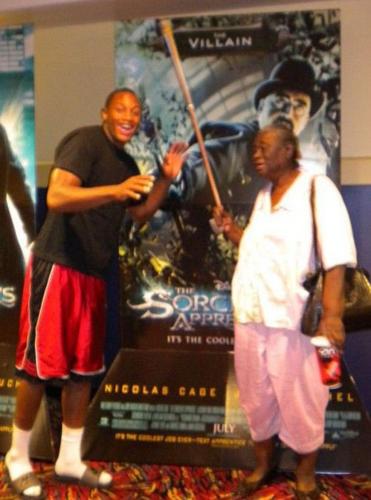 Mountain Pointe senior Izzy Marshall was raised by his grandmother, Nina Ross, and it is clear that they have a tremendous relationship. 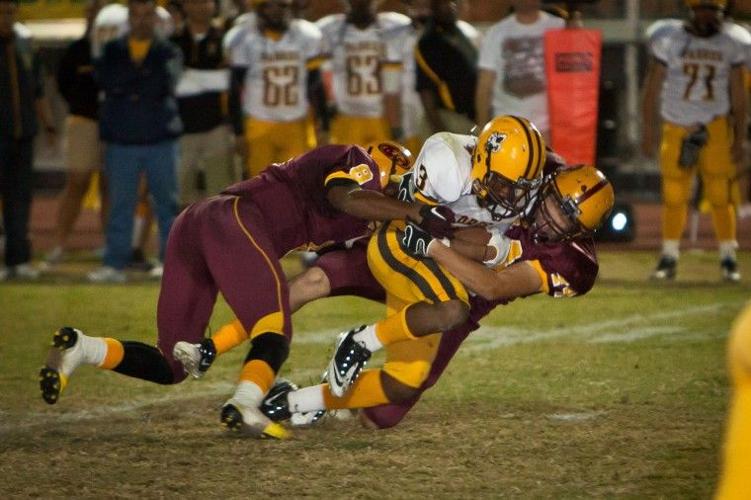 Mountain Pointe senior Izzy Marshall, left, brings down a Marcos de Niza tackler but didn't allow himself to be brought down by a negative start to his life.

Mountain Pointe senior Izzy Marshall was raised by his grandmother, Nina Ross, and it is clear that they have a tremendous relationship.

Mountain Pointe senior Izzy Marshall, left, brings down a Marcos de Niza tackler but didn't allow himself to be brought down by a negative start to his life.

The one thing that makes it the least bit bearable is watching Izzy Marshall fiddle with his clothes, making sure every collar and button looks just right.

"He is just like his dad," Ross said of Marshall. "He is trying to really do something with himself in school like him and they both have very sweet personalities, but where I really see it is when it comes to his appearance. He is very funny and particular about it. Everything has to be just right."

It is a point of pride for Marshall and something he can control whereas his early childhood was out of his hands and just about everything was wrong.

The Mountain Pointe senior came from a broken home as his father was killed on Aug. 7, 1991, his 26th birth date, in what Ross described as a gang shooting before Marshall was even born.

His mother has been in and out of drug rehabilitation for years forcing Ross to take in Marshall and his three siblings when the former was about 5.

"People ask me all of the time do I wish things were different," Marshall said. "No. Not a thing. I wouldn't be who I am today if it was different. I still see my mom, just last week, every now and then and I know she is being the best mom she can be. I am on the right path and who knows how things might have been otherwise."

Ross is right about one thing - Marshall has one of those personalities that do not have a dimmer switch.

It is always on and bright as can be.

Whether it is his smile, his playful approach to most things off the field or his big bear hugs, people are drawn to Marshall. After football games, he was regularly the last Pride football player into the locker room simply because he loves to talk and there was a line of people waiting to give him a hug.

Part of it is his natural self and the other part comes from the fact that he is lucky to be where he is at instead of doing something negative.

"I could have gone the other way, I know that and thank God every day that I didn't," said Marshall, who is also part of Mountain Pointe's rotation in basketball. "You look at how my life began with no father and my mom dealing with her addiction, there was a chance that I could be involved in some very dark things."

Marshall said he found out early on that he couldn't let the little things - like appearance - go or the big things would soon follow.

"The one thing I have learned on my own was discipline," he said. "If I wanted to get what I wanted or become who I wanted to be, I had to be disciplined. It carries over into sports and that is the one major change that I developed on my own."

And if it hadn't grandma wouldn't have been far behind.

"I am from the old-school and I brought him in the church," Ross, 73, said. "By the grace of God, he and all of his brothers and sister made it through."

All are or will be enrolled in college in the coming months with O'Neal going for his masters at Morgan State in Baltimore.

"That means so much for me to see that," Ross said. "They are giving themselves a chance to be successful."

One of the reasons they are is because she stepped in and did what family does - take care of each other at moments of crisis.

Now, they are returning the favor as the years begin to creep up on Ross, who lives in south Phoenix. She has to have dialysis because her kidneys are failing. They all do their part to make sure Ross is OK after being weakened by the procedure a couple of times a week.

"But she never tells me how she is really feeling," Izzy said. "She keeps it bottled in so I don't worry about her as much, but I know she is hurting."

Marshall, who no longer lives with Ross and has stayed with various teammates this school year, used his relationship with his grandma as the deciding factor in choosing where he would play college football.

One of his dream schools was Boise State, the other being Florida State, and he received a scholarship offer from the Broncos to be part of their defense.

"I almost accepted on the spot because that's where I truly wanted to go but I had coaches and friends tell me to take my time," Marshall said. "It is still my dream school, but I wanted her to be able to see me play college football so I chose ASU. I want to be here for her and this was the best possible way."

Ross, who made it to nearly all of the Pride's 12 football games this season, was thrilled with the decision, but at the same time didn't want to limit his potential.

"I told him to do whatever he had to do, but I also said I didn't know how much longer I was going to be here," she said. "It means a whole lot to me. I love watching him play. I was there hooping and hollering. I don't know what is going on, but I know when Izzy does good."

No worries there as Marshall continues to do well in life and grow as a man.

"I don't have regrets," he said. "It made me more mature. God looked over us and led us in the right direction. I have no reason to complain compared to how it could have been. My grandma stepped into the picture and was a true blessing in my life. If it wasn't for her and if she didn't take responsibility I don't know where I'd be right now."

Mountain Pointe’s second unit might be key to success

Thunder use third-quarter run to knock off Pride

So what is next?

Basketball lends itself to individual talent.

The end result involves a pen, a letter of intent, enough handshakes that a bottle of Purell best be handy and posing for a lot of pictures.