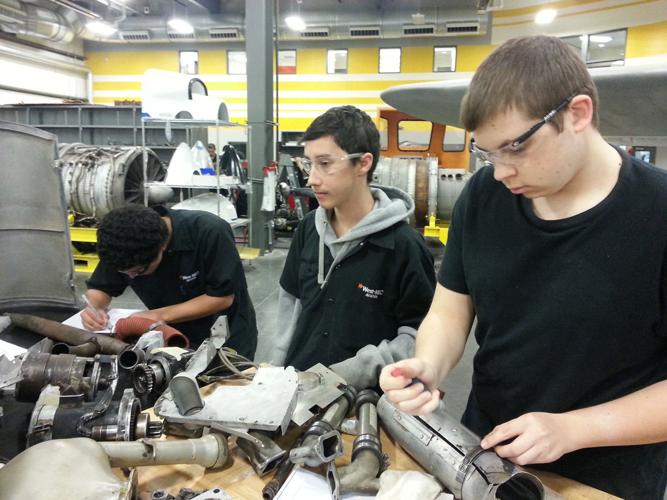 Matthew Capota, center, a student at Liberty High School in Peoria, works with students in the aviation program at Western Maricopa Education Center in Glendale, one of the 13 joint technical education districts in Arizona. From Dec. 30, 2014 [Photo/Alicia Canales] 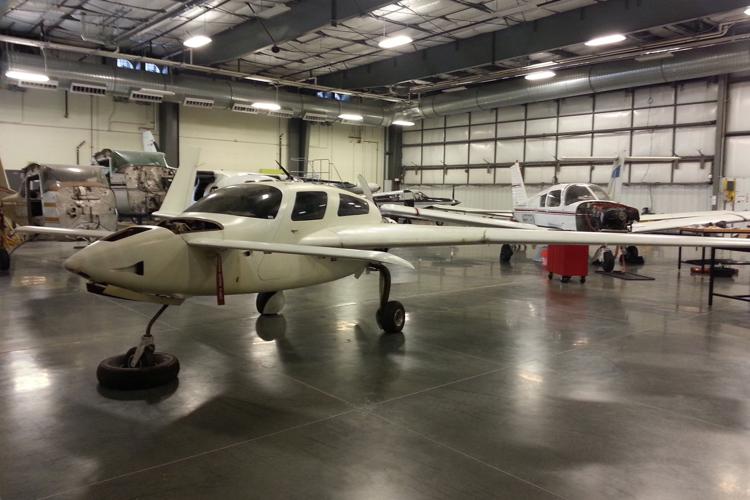 Planes are part of the curriculum of West-MEC’s aviation program in Glendale. [Photo/Alicia Canales]

Matthew Capota, center, a student at Liberty High School in Peoria, works with students in the aviation program at Western Maricopa Education Center in Glendale, one of the 13 joint technical education districts in Arizona. From Dec. 30, 2014 [Photo/Alicia Canales]

Planes are part of the curriculum of West-MEC’s aviation program in Glendale. [Photo/Alicia Canales]

Matthew Capota glanced over his group as three teenagers picked up pieces of an airplane engine on a table and turned them over in their hands. Capota, a senior at Liberty High School in Peoria, and fellow students make sure the engine would work properly and safely.

“David, inspect it for cracks, corrosion or anything unairworthy,” Capota said.

Capota is one of 33 students in the aviation program at Western Maricopa Education Center in Glendale, one of the 13 joint technical education districts in Arizona.

These school districts offer Career and Technical Education courses, which will help provide workers for jobs that are projected to grow by 2020, according to a study by the Morrison Institute for Public Policy at Arizona State University. Construction jobs, for example, are expected to increase by 30 percent.

Dan Hunting, senior policy analyst at the Morrison Institute, said that Career and Technical Education provides another opportunity for students who struggle in high school.

“People are saying, ‘You need to stick it out through high school and go through four more years in college.’ Which if they’re not doing well in high school, four more years of the same or harder looks like a terrible option, so they bail and work in dead-end fast food jobs,” Hunting said. “It’s easier to pitch CTE courses and a year or more of training to get a more stable career.”

Bill Hart, senior policy analyst at the Morrison Institute, said there used to be an assumption that students needed to go to a four-year college in order to be successful.

“There was period of time that, everyone needs four years of college, if you don’t have a bachelor’s, then you’re not educated,” Hart said. “Then people realize that some people aren’t put together to go through four years.”

“You can’t do this halfway because it’s an airplane,” Maestas said. “Takeoff is optional. Landing, mandatory.”

West-MEC serves more than 21,000 students through its central campus programs and programs on high school campuses. It partners with 12 member districts that help facilitate the CTE programs.

Students can take certain CTE courses as electives on their own high school campuses, such as biotechnology, information technology, and welding. West-MEC operates its own programs as well, called central programs, which count as electives too. These include cosmetology and veterinary sciences.

Business members of the community sit on advisory councils at West-MEC and share advice on what will be effective in their given industry, said Danielle Hunt, director of communications and public information officer for West-MEC School District.

Hunt said that the programs at West-MEC are designed to apply the curriculum to relate to real-world matters.

“When you put them in hands-on learning experience, they go, ‘Oh I get now why I had to learn that trigonometry when I’m in my aviation program,’” Hunt said. “It’s going beyond the textbook; we try to get these kids engaged with their future.”

Hunt said students who enroll in West-MEC CTE programs can choose to continue in their post-secondary education.

“What we’re trying to do is just open up options for students to be able to be more prepared to enter the working world,” Hunt said.

Israel Meza Roman, a freshman at Estrella Mountain Community College, is finishing up the second year of the aviation program but plans on transferring to ASU to become a lawyer.