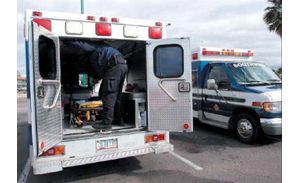 In a May 5 letter to Rural/Metro’s board of directors, Gabe Hoffman, Accipiter general partner, said “we believe that at current levels, the company’s shares are undervalued and represent a compelling investment opportunity.”

Accipiter hopes stockholders will replace them with two of its own candidates — Hoffman and Nicole Viglucci, a public equity health care investor with Accipiter.

Accipiter and Hoffman did not return repeated calls for comment.

Rural/Metro has publicly criticized Accipiter’s “costly and disruptive proxy contest,” and said its board candidates lack the qualifications to serve shareholders.

“What ISS focused on was their lack of experience and their lack of ability to properly serve the shareholders,” said Jack Brucker, Rural/ Metro’s president and CEO.

“We believe what ISS said is correct, that we have provided solid operating performance and good market performance in recent years, and that our nominees are more qualified to better serve shareholders.”

It all will come down to how shareholders feel about the stock and whether they believe it could be doing more for them, said Phil Oelze, senior vice president of investments at UBS Financial Services in Scottsdale. “I think it shakes down pretty easily for most investors,” he said. “They’ve been at it for a long time and maybe it’s time the stock did go somewhere. “That seems to be the response I’m getting.”

Accipiter invests solely in health care and has about $500 million in assets under management. In a slide presentation to shareholders, Accipiter describes what it calls a “lack of transparency” when it comes to investor disclosure.

It also says Rural/Metro’s stock price is lower today than when Clement and Walker joined the board, which is “clearly in need of fresh ideas, rather than the same people who have overseen disastrous stockholder returns.”

In the May 5 letter, Hoffman said Rural/Metro’s management team is doing a good job, but a “significant disconnect” exists between the stock price and the company’s positive business outlook because of two factors:

• Overhang from a potential equity offering.

A shelf statement the company filed in February created expectations that an equity offering is imminent and will be completed at a stock price near current levels, thus hold- ing down the stock price, Hoffman said.

As for investor communications, Hoffman said companies like Rural/Metro that don’t give financial guidance trade at discounts, which translates into a lower stock price.

Brucker said neither complaint is valid. The shelf statement is just one of many possible strategic alternatives the company has if it needs to raise capital to pay off higher-priced debt, he said.

“We also have the alternative of refinancing the company,” he said.

“Rural/Metro provides lots of guidance in terms of revenue guidance, metrics and statistics on our operating performance, forward-looking projection regarding our revenue growth and our win rate on the contracts,” he said.

“Accipiter is the only shareholder that has ever asked us for pennies-per-share, quarterly EPS guidance.

There’s not much to back up Accipiter’s argument that Rural/Metro’s stock could be doing a lot better, said Joe Blankenship, an account manager at Source Capital Group in Scottsdale. He tracks Arizona stocks.

“Unless I went back and did a fundamental analysis of the company, which I haven’t done in awhile, I wouldn’t be an unhappy shareholder at this moment.”

Blankenship said he’s been critical of Rural/Metro in the past because it had a “poor business model,” but a lot has improved since then.

“They still have $300 million in debt and to me that’s the critical part,” he said.

“It’s just an extremely highly leveraged company and the debt will always get first call before shareholders.”

It’s tough to say whether Rural/Metro’s stock should be performing better because the company is in a “fairly capitalintensive business” with lots of costly rules and regulations, and ongoing payment issues, Oelze said.

“It’s just not a very attractive business, to be honest with you,” he said. “It’s tough to make a good profit in the business they’re in.”

As for the proxy contest, if Rural/Metro can effectively convince its investors that it has a plan to take the company to higher levels, then it might stave off Accipiter’s onslaught, Oelze said.

“If not, the promise of more instant realization of profit is pretty alluring to most investors, and the time value of money means something,” he said.

Even if shareholders side with Accipiter, it would still have only two seats on the seven-member board, Brucker said.

“They would have the same legal duty to act in the best interest of all shareholders, not just their own personal opinion as to how things should go.”

In Accipiter’s latest filing with the SEC, Hoffman said voting for Accipiter will be beneficial to stockholders.

“We stand firm in our belief that Rural’s shareholders should vote in favor of Accipiter’s nominees, both of whom are focused on unlocking shareholder value by improving Rural’s outdated corporate governance practices, increasing financial transparency to shareholders through more detailed reporting of operating results and through specific financial forecasts and engaging an investment bank to explore all strategic alternatives available to Rural,” he said.

“We reiterate that we do not have a premeditated agenda regarding which specific strategic alternatives that Rural should pursue to unlock shareholder value.”