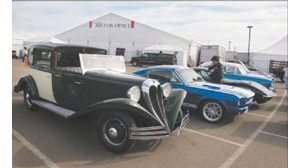 LINED UP: Collector cars arrive at WestWorld in Scottsdale on Tuesday afternoon in preparation for the Barrett-Jackson Collector Car Auction, beginning Monday and lasting through Jan. 21.

LINED UP: Collector cars arrive at WestWorld in Scottsdale on Tuesday afternoon in preparation for the Barrett-Jackson Collector Car Auction, beginning Monday and lasting through Jan. 21.

And yes, that is the show’s official moniker. And yes, it is fitting.

Not just your typical pricey auto auction, although selling cars is certainly the reason for its existence, Barrett-Jackson has something for everybody.

You can shop for everything from cowboy clothes to elegant condos among 350 or so vendors, belly up to any of several bars, party in the new club tent, The Garage, ogle the one-ofa-kind celebrity stuff Barrett-Jackson CEO Craig Jackson brought in to launch the show’s first Rock ’n’ Roll Memorabilia Auction, or lounge at the posh Lifestyle Pavilion, sipping wine and munching on gourmet tapas.

Last year, 225,000 people showed up for the weeklong extravaganza. They spent $100 million on Duesenbergs and Dodges, Camaros and Corvettes.

And they spent almost as much or more on everything else from hotel rooms to gourmet restaurant meals to art and whatever else caught their fancy.

“We can clearly say it’s one of — if not, our most — significant event,” said David Roderique, Scottsdale’s economic vitality general manager. “It’s the lifestyle component that sets it apart. It gets people here and keeps them here for a longer time and creates a significant economic benefit.”

The city collected nearly $800,000 in sales and bed taxes from them. Barrett-Jackson galas and fashion shows benefiting local charities raised more than $4 million.

Dozens of the Fortune 400 richest people in the world showed up to bid on the cars and play at the bars, said Barrett-Jackson President Craig Jackson. And they and fellow car buyers came with lines of credit topping $1 billion.

This year, there are even more coming, with even more financial wherewithal, he said.

And there’s even more for them to see and do, he said.

There’s a whole new place to see and be seen — The Garage, a nightclub in a tent with live bands.

And there’s more TV coverage — 40 hours, up from 33 last year, on SPEED Channel.

But unquestionably, Barrett-Jackson’s raison d’etre is the world-class collection of collector cars and the hundreds of thousands of car lovers who want to eye and buy them.

They will all cross the block at “no reserve,” which means no minimum bid. And several could fetch a $1 million-plus price, Jackson said.

Jackson said the cars to watch include the last Corvette Stingray made; a 1971 Plymouth Barracuda, “the fastest HEMI ’Cuda in the world”; a Russian rescue boat-car used to collect cosmonauts from Siberia; a CNN Hummer overhauled by Overhaulin’s Chip Foose; a couple of Dodge Firearrow convertible concept cars — the only two ever built; “the most unbelievable selection of HEMIs ever for sale”; and 34 Shelbys, including auto icon Carroll Shelby’s personal 1966 Shelby Cobra 427.

“That could be one of the most expensive cars sold,” Jackson said.

Jackson said he is expecting as many as 250,000 people to show up during the weeklong auction this year.

“And they’re dressed in Levis and baseball caps so you couldn’t pick them out if you tried,” he said.

In fact, while the big spenders, sponsors and VIPs get special privileges at Barrett-Jackson, such as exclusive entry to the bidders’ seating and the Lifestyle Pavilion, Jackson makes it easy — and cheap — for everybody who wants to cozy up to pricey cars to do so.

Admission for Family Value Day on Monday is only $15.

Happy hour admission, Tuesday and Wednesday after 5 p.m., is only $5.